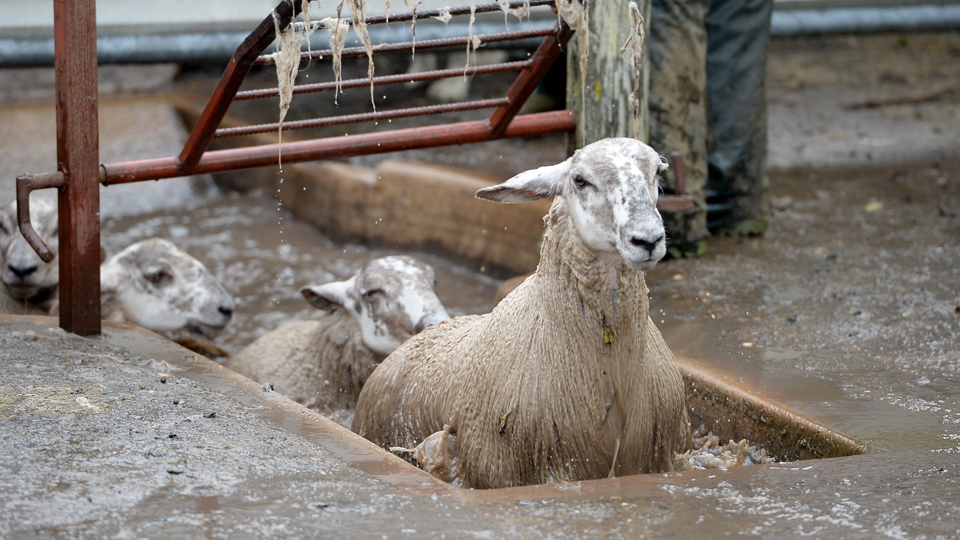 A sheep dip is used to wash away parasites. Photo: Getty
analysis

The inability of the Turnbull government to read the electorate never ceases to amaze. The latest example is the Prime Minister refusing to phase out the live sheep trade. Swept aside is widespread community revulsion with arguments that take us all for mugs.

It has eerie resonances of the resistance to a banking royal commission. Only this time the push-back is coming from the Coalition Nationals and some Western Australian Liberal MPs.

Mr Turnbull and his agriculture minister, David Littleproud, say their decision to ignore calls for the trade to be banned in the northern summer months and be phased out over five years is based on veterinary science.

It is a claim refuted by the Australian Veterinary Association and the RSPCA.

Mr Turnbull and Mr Littleproud trumpet tough new regulations with fines and jail terms for cruel exporters who flout the rules. But the record of non-enforcement of older stringent regulations shreds the credibility of these assurances.

Liberal backbencher Sussan Ley – a former cabinet minister –  comprehensively demolished the government’s arguments as she introduced a private members bill into the Parliament to fill the vacuum.

A sheep farmer herself for 17 years, representing a regional New South Wales seat, Ms Ley says the trade can only survive profitably on the business model of animal cruelty. More humane conditions would render it unviable.

Ms Ley told Parliament the trade only exists because it is subsidised by Qatar and Kuwait. They are likely to follow Bahrain and end this support. We need to transition. Besides, she says, the trade represents only 6 per cent of our sheep and lamb exports. We export chilled, processed lamb and mutton to 100 other countries.

There are reports Mr Turnbull’s cabinet is split along Liberal and National Party lines. Though there are suggestions the five West Australian cabinet ministers also do not support phasing out the trade. The bulk of it is WA based.

MPs from all sides report their offices have been inundated with protests that have been spontaneous and angry. Ms Ley says community outrage is palpable. She is not alone believing it has rapidly become a vote-changing issue.

It is no accident her seconder was Sarah Henderson. Her seat has become more marginal after the redistribution, as has the seat of the other dissenter, Jason Wood.

Mr Wood joined his two colleagues at a news conference where he spelt out his mistrust of the Agriculture Department to continue to be the regulator. He is demanding independent vets – until now not associated with the trade – be appointed.

His scepticism is hardly surprising. The Agriculture Department saw nothing untoward with the Awassi Express shipment last year where 2000 sheep died in the most appalling conditions.

Labor’s shadow cabinet and caucus are set to support Ms Ley’s private members bill. But the opposition is four down on its numbers in the house pending the delayed byelections. Indeed, such is the nationwide revulsion, the trade is sure to be an issue in the byelections.

The opposition’s parliamentary strategist, Tony Burke, says that if Labor holds its four seats then there is a good chance the numbers on the floor of the house could be there to bring on a vote. Otherwise there would have to be a change of government at the general election to end this inherently cruel business.

The Prime Minister’s office believes this concern is overstated. One source says it didn’t come up in the politics in the pub campaigning last week.

Seven backbench Liberals turned up to support Ms Ley as she introduced her bill. But she, for now, is playing down a mass floor crossing to embarrass the government. She seems confident of gaining a party room consensus to force cabinet’s hand.

Whatever happens the government’s internal politics will be as ugly as the commerce that prompted it.

Sussan Ley runs her own government through a sheep dip