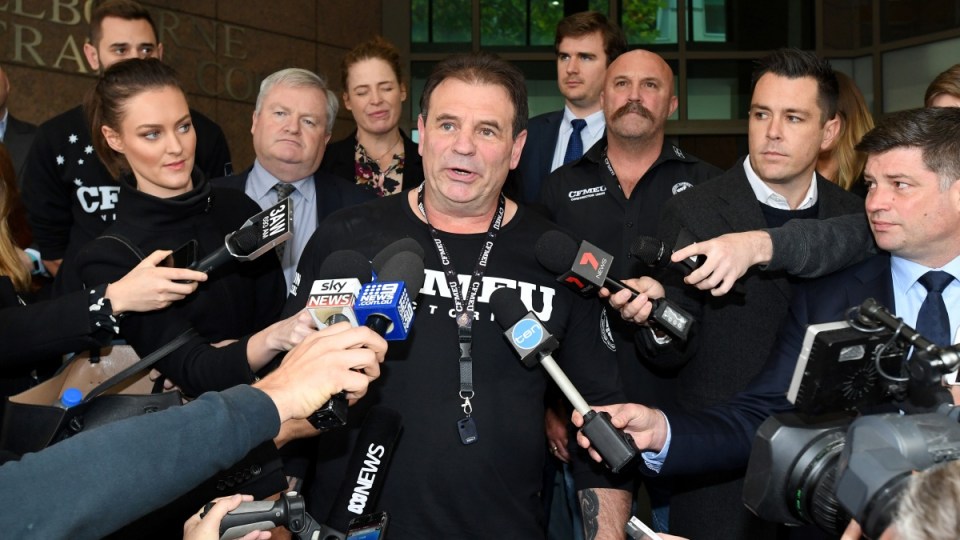 The CFMMEU's national executive is yet to make a public statement about the future of embattled Victorian boss John Setka. Photo: AAP

The lawyer for two union officials who had blackmail charges against them sensationally dropped has labelled the outcome a “win for workers” as government ministers defend the legacy of the trade union royal commission.

Peter Gordon said on Wednesday the decision by prosecutors to abandon charges against Construction, Forestry, Mining and Energy Union (CFMEU) leaders John Setka and Shaun Reardon “further shredded” the credibility of the royal commission and construction company Boral, which accused the men of wrongdoing.

“The abandoning this morning of trumped up charges of blackmail … brings an end to a dark chapter in Australia’s union and political history,” Mr Gordon said.

“I want to acknowledge the courage and the integrity of Victoria’s director of public prosecutions in bringing to a final end this farcical prosecution.”

Boral and the royal commission should now face the “same sort of scrutiny that has been applied to John Setka and Shaun Reardon”, Mr Gordon said.

The charges against Mr Setka and Mr Reardon were the most high-profile referral from the Abbott government’s $46 million royal commission.

The pair were accused of blackmailing Boral executives Paul Dalton and Peter Head at a cafe meeting in April 2013.

It was alleged the pair had threatened to blockade Boral plants and trucks if the company refused to meet the union’s demands to appoint their own occupational health and safety representatives on building sites.

Asked on Wednesday if the development was embarrassing for the government, Jobs Minister Michaelia Cash replied: “Absolutely not. That is a matter for the Victorian police.”

Senator Cash said the royal commission’s purpose went beyond referrals for criminal investigations, such as restoring the Australian Building and Construction Commission (ABCC).

Australian Council of Trade Unions secretary Sally McManus said the government had serious questions to answer after the charges were dropped.

“Were they involved in trumping up charges to jail union leaders for 15 years for fighting for safety?” Ms McManus said in a tweet.

Prosecutors finally dropped the charges against the men on Wednesday midway through a pre-trial committal hearing in Melbourne Magistrates’ Court.

“They [the government] were so keen to do the trade union royal commission, hoping that it would take some paint off their political opponents.

Speaking outside court and surrounded by supporters, Mr Setka also accused the government of a “witch hunt”.

“We know for a fact and the evidence has come out … that it was a witch hunt,” he said.

Mr Setka also thanked his lawyers and reasserted his innocence.

“Our job is to make sure that workers go home to their families”, Mr Setka said Wednesday of the Boral meeting.

“That was what we were trying to do.”

The meeting in question at North Melbourne’s Auction Rooms cafe was called by Boral in the hope the union would lift a blackban on its cement deliveries.

At the time of the meeting, the CFMEU was waging industrial war against building giant Grocon, which Boral supplied with cement.

Details of the meeting emerged as Mr Dalton gave evidence during Mr Setka and Mr Reardon’s committal hearing, which was to determine if there was enough evidence to send them to trial.