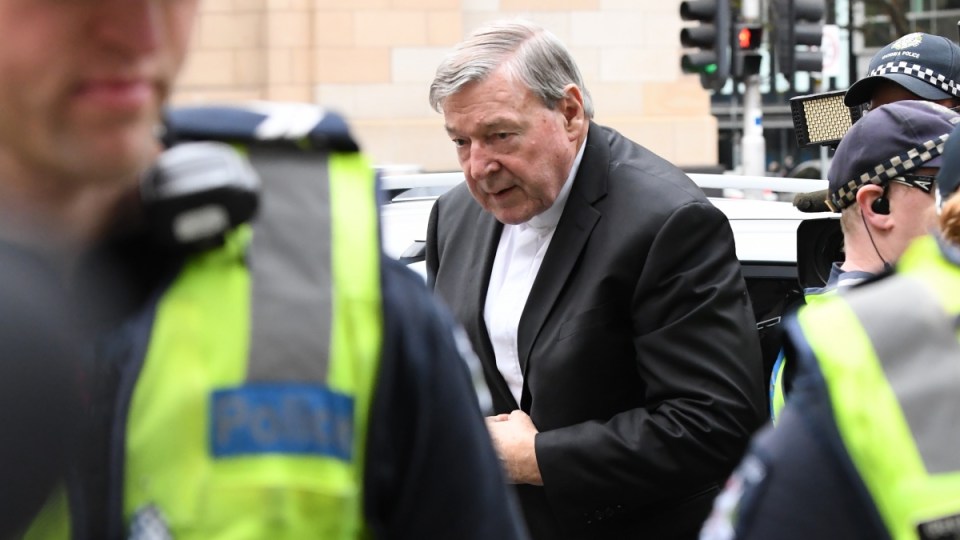 One trial will be regarding the allegations of abuse at a swimming pool in the 1970s and the other will be a trial regarding abuse at a Melbourne Cathedral when Pell was archbishop of Melbourne.

Cardinal Pell was helped through a large media pack in front of the court just before 9am on Wednesday with the help of police officers to appear for the pre-trial directions hearing regarding multiple historic allegations.

The 76-year-old arrived less than 24 hours after a magistrate dramatically ruled the case should proceed to a trial by jury at a higher court.

At the end of the hearing Judge Susan Pullen asked the Cardinal to stand.

He wasn’t in the dock, but in the front row of the small courtroom at the County Court.

Ms Pullen told the Cardinal he was bailed until May 16 and required to attend court on that date.

Cardinal Pell replied, “Thanks your honour” before leaving the courtroom for a private meeting with his legal team.

Both the prosecution and defence agreed the two trials could take place later this year and are expected to take five weeks each.

A directions hearing in which the trial dates will be decided was set for May 16.

Cardinal Pell’s lawyer, Robert Richter, told the court he hoped the trials would be “expedited” and take place as soon as possible.

“That’s for various reasons … my client is 76 years old and number two everyone needs to get on with their lives,” Mr Richter said, adding that one of the witnesses involved was 80 and in poor health.

Mr Richter told the court his team would be seeking to get court subpoenas to obtain the medical records of Cardinal Pell’s accusers.

Ms Pullen asked if there were any funding problems for the Vatican treasurer, to which Mr Richter replied: “No problem with funding.”

That figure does not include the rest of his legal team, putting the potential total cost in the millions.

Cardinal Pell ignored questions as he left the court flanked by police to a waiting car just before 9.45am. At least one protestor shouted abuse.

Magistrate Belinda Wallington dropped half the charges against the Australia’s highest ranked Catholic cleric on Tuesday including some of the more serious matters.

Cardinal Pell spoke in a loud voice to plead “not guilty” to all charges.

The Vatican issued a short statement Tuesday night saying the Holy See had “taken note” of the decision to commit Cardinal Pell to trial.

“Last year, the Holy Father granted Cardinal Pell a leave of absence so he could defend himself from the accusations,” the Vatican statement said.

“The leave of absence is still in place.”

Lucie Morris-Marr is an investigative journalist. She has worked as a senior writer at The Herald Sun where she broke the world exclusive about the secret SANO Taskforce investigation into Cardinal George Pell. She is covering Cardinal Pell’s legal proceedings exclusively for The New Daily and CNN.