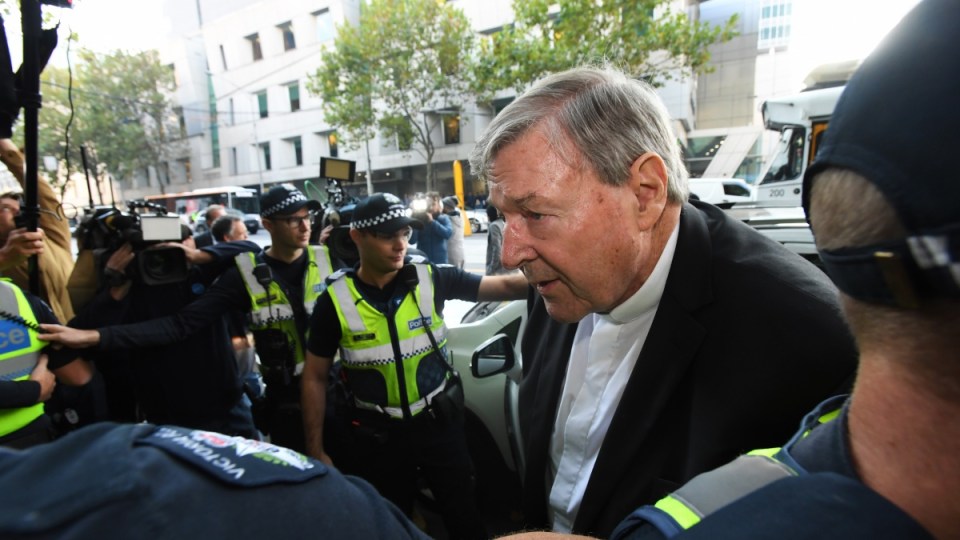 Cardinal George Pell has pledged to defend the remaining charges against him after a Melbourne magistrate dropped one-half of the allegations of historic sexual abuse but committed him to stand trial on the other half.

The Cardinal’s legal team said he had “always and steadfastly maintained his innocence” and would continue to do so at trial.

“He has voluntarily returned to Australia to meet these accusations,” the statement from Galbally and O’Bryan Lawyers read.

“He will defend the remaining charges.

He would like to thank all those who have supported him from both here in Australia and overseas during this exacting time and is grateful for their continuing support and prayers.”

Magistrate Belinda Wallington ruled on Tuesday morning there was evidence of sufficient weight on multiple charges against Australia’s most senior Catholic cleric for him to stand trial.

Cardinal Pell showed no emotion as he sat listening to the decision alongside his niece Sarah Pell and Katrina Lee, the executive advisor for the Archdiocese of Sydney.

When asked to enter a plea, he said loudly: “Not guilty.”

In what is an unprecedented situation for Pope Francis, Cardinal Pell will be the most senior Vatican figure ever to face a criminal trial.

Cardinal Pell was ordered to appear Wednesday at 9am at County Court for a directions hearing for the trial.

The decision came after a dramatic four-week committal hearing in March in which the Cardinal’s lead barrister, Robert Richter, said the accusers were lying and had a vendetta against Cardinal Pell.

During the hearings, Mr Richter called for all charges to be dismissed, saying that a trial at a higher court in front of a jury would be a waste of public money.

He speculated the complaints made to police against the Cardinal were a product of “fantasy” or mental health problems.

Ms Wallington remarked that issues of credibility and reliability were issues for a jury “except when you get to a point when credibility is annihilated”.

Mr Richter responded: “Or close enough to annihilation or a waste of public, time, money and effort to put the man to trial.”

The Cardinal Pell verdict comes after years of clergy abuse and cover-up scandals hitting the Roman Catholic Church from across the globe including thousands of cases, investigations and convictions in countries including the United States, Canada, Ireland and Australia.

Mr Richter claimed Cardinal Pell’s accusers made up accusations against the high-profile cleric due to a “backdrop of innuendo” as a result of two public inquiries into institutional abuse in Australia.

“One would have to be living on Mars not to notice the centre of the allegations has been the Catholic Church,” he told the court.

“And one would have to be living out of Australia not to be living in the fact Cardinal Pell has been seen as the face of this response.”

Mr Richter also claimed photos of Cardinal Pell accompanying Father Gerald Ridsdale to court in 1993, to support him during a sex abuse case hearing, created feelings of “hatred” towards the Cardinal who was then punished by his accusers.

“That hatred grew greater and greater as he ascended that organisation.”

Mr Richter also strongly criticised detectives from Sano Task Force alleging they did not properly test the claims of the accusers.

Lucie Morris-Marr is an investigative journalist. She has worked as a senior writer at The Herald Sun where she broke the world exclusive about the secret SANO Taskforce investigation into Cardinal George Pell. She is covering Cardinal Pell’s legal proceedings exclusively for The New Daily and CNN.

‘I will fight’: George Pell to stand trial on criminal charges