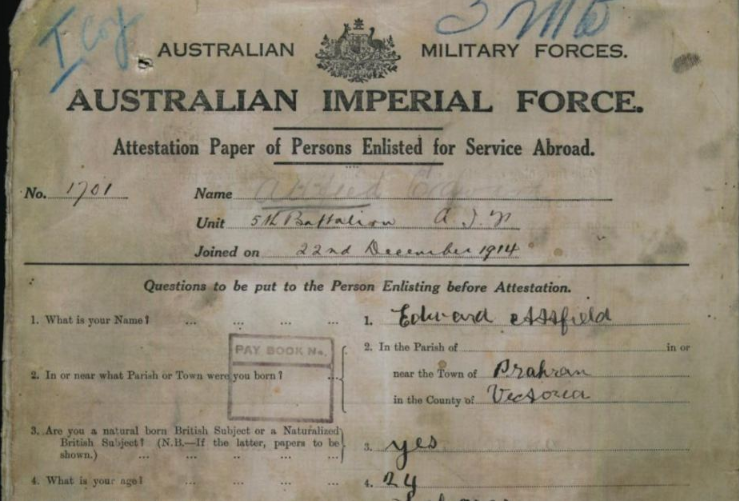 For a century, Gallipoli veteran Private Edward Attfield was thought to have deserted from the Australian Army.

But a Victorian researcher has helped prompt work to identify his grave site in Egypt, ensuring Private Attfield’s descendants can erect a headstone in his honour and correct the record about his service.

This Anzac Day, the headstone will be unveiled.

His family has chosen the inscription: “I once was lost, but now am found.”

Private Attfield’s most direct descendant will also receive war medals on his behalf.

The mystery began to unfold two years ago when the body of an Australian soldier was discovered near Giza Base in Egypt.

The identity of the war veteran could not be established and a grave was marked for an unknown soldier.

Victorian researcher Martin Elliget asked the Australian Army to make further inquiries about the identity of the soldier, and helped unearth the truth about Private Attfield’s disappearance.

He had been fighting with the 5th Battalion and had gone missing from the area where the body was found.

“He had previously been declared a deserter by mistake.”

Official records for Private Attfield, regimental number 1701, show his keen interest in joining the army. It took him eight attempts to finally enlist at the age of 24.

In 1915 he fought in Gallipoli, was wounded and evacuated for treatment, and then returned to the battlefield where he remained fighting until December that year.

His Statement of Service notes in 1916 he was considered “illegally absent”.

According to the archives his last letter to his mother was written from Cairo in January 1916.

“It is a wonderful occasion to rectify the record on a true hero of Gallipoli on Anzac Day 2018,” Mr Chester said.