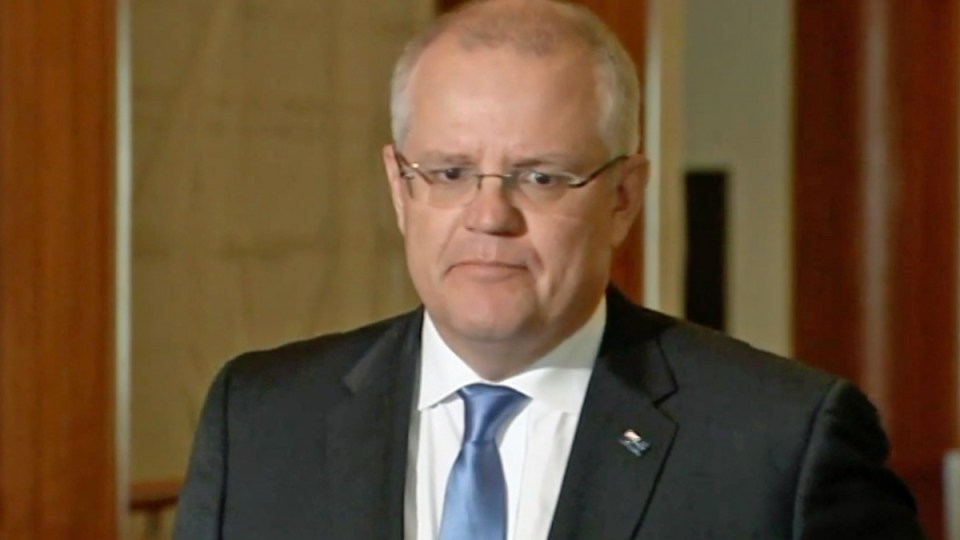 Scott Morrison: Not Santa, nor the Grinch. Photo: AAP

“On May 8, as on December 25, Scott ‘Santa Claus’ Morrison will be announcing some goodies,” Mr McCormack told the Daily Telegraph.

The newspaper splashed the story on its front page, labelling the Treasurer ‘Santa Scomo’ and mocking up an image of him with a white beard and Santa outfit.

The front page of tomorrow's The Daily Telegraph pic.twitter.com/4FrgRDR7hz

“I’m not bringing a bag of gifts in May and there won’t be any Christmas in May,” Mr Morrison said, hosing down the expectations Mr McCormack raised just hours into his first stint as Acting PM.

Malcolm Turnbull has a series of engagements in Europe including the Commonwealth Heads of Government Meeting (CHOGM), leaving Mr McCormack in charge for the first time since he took the Nationals leadership from Barnaby Joyce.

Mr McCormack, who is also Infrastructure and Transport Minister, foreshadowed that the May budget would include unprecedented spending on roads and rail lines.

Neither Santa nor the Grinch

The Treasurer denied being Santa, but also moved to reassure people it would not be a tough budget, saying: “The Grinch won’t be making an appearance either.”

Mr Morrison said he had already made the biggest infrastructure announcement that would be in next month’s budget — spending $5 billion on a rail connection to the Melbourne Airport.

The Treasurer has also already announced $1 billion for the Pacific Motorway in Brisbane.

“We have been making a number of announcements on infrastructure prior to the budget and you can expect us to continue to do that,” Mr Morrison said.

In contrast to Mr McCormack emphasising the record spending in the budget, Mr Morrison said it would be a responsible and affordable budget.

“He was enthusiastic about the important investments that have been made in infrastructure, but I’m sure he would agree with me that our budget will be one that lives within its means,” Mr Morrison said of his colleague.

The federal budget is expected to include a promise of income tax cuts.

Mr Morrison would not confirm the details, but noted the Government had been flagging since “as late as last November that we would be focusing, targeting tax relief to middle-income earners because that’s important economically”.

He said that would relieve the “burden on families, on middle incomes who have been doing it tough”.

Some in the Coalition hope the budget will help to turn around the Government’s standing in the polls.

Labor leader Bill Shorten accused the Government of using the budget as part of its re-election campaign.

“You are not Santa Claus or any other mythical person,” he said of the Treasurer.

You have an obligation to spend taxpayer money in the best interests of the Australian people not just simply to try and do something about your unpopularity.”

Mr Shorten said it was “amazing” that so soon after Mr Turnbull flew out of Australia, two such senior Cabinet ministers had dramatically different versions of what to expect in the budget.

“It doesn’t show a lot of respect for the Australian people when politicians cynically describe the taxpayer money they use as presents from Santa,” he said.

“Wrong, the money that you spend in the budget is taxpayer money.”

This afternoon Mr McCormack denied he had tarnished his first day as Acting Prime Minister with the lavish description of the Treasurer’s budget approach.

However, he said the two men did have a conversation today and described Mr Morrison as looking forward to presenting a “fiscally responsible” budget.