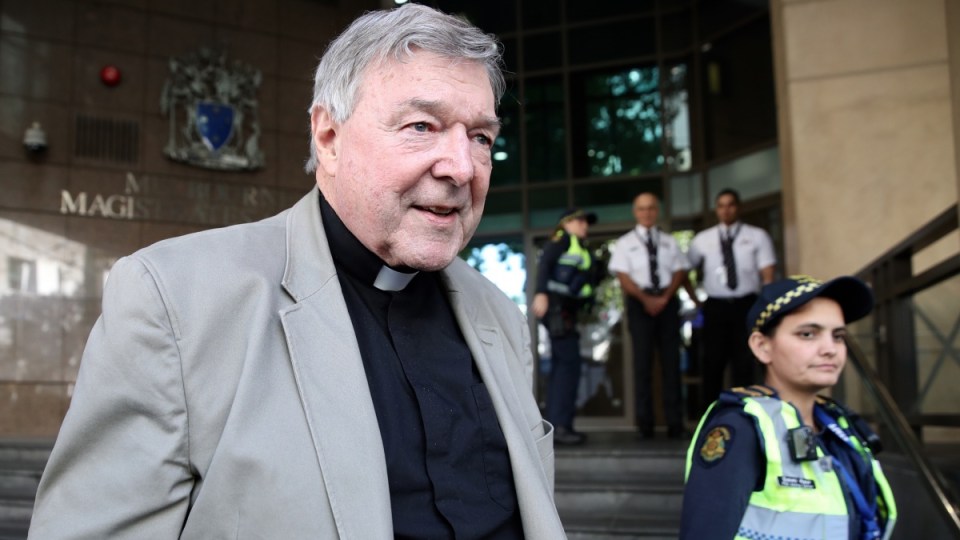 The Cardinal has returned to Australia from the Vatican to fight charges of historical abuse. Photo: Getty

Cardinal George Pell should not face trial for historic sexual abuse allegations because his accusers have all told “monstrous lies” and are trying to “destroy” him, a court has heard.

During a dramatic legal argument summary at the committal case hearing Robert Richter, QC, the lead defence barrister for the Vatican treasurer, said the multiple charges against him were “impossible” or “highly improbable”.

He said a jury would not be able to make a conviction at trial.

Mr Richter officially called for all charges to be dismissed at the hearing at Melbourne Magistrates Court saying that a trial at a higher court in front of a jury would be a waste of public money.

He speculated the complaints made to police against the Cardinal were a product of “fantasy” or mental health problems.

Magistrate Belinda Wellington remarked that issues of credibility and reliability were issues for a jury “except when you get to a point when credibility is annihilated”.

Mr Richter responded: “Or close enough to annihilation or a waste of public, time, money and effort to put the man to trial.”

He accused accusers of making up accusations against high-profile Dr Pell due to a “backdrop of innuendo” as a result of two public inquiries into institutional abuse.

“One would have to be living on Mars not to notice the centre of the allegations has been the Catholic Church,” Mr Richter told the court.

And one would have to be living out of Australia not to be living in the fact Cardinal Pell has been seen as the face of this response.”

Mr Richter also claimed photos of Dr Pell accompanying Father Gerald Ridsdale to court in 1993, to support him during a sex abuse case hearing, created feelings of “hatred” towards the Cardinal who was then punished by his accusers.

“That hatred grew greater and greater as he ascended that organisation.”

Mr Richter also strongly criticised detectives from Sano Task Force alleging they did not properly test the claims of the accusers.

However, Mark Gibson, the lead barrister for the prosecution, told the hearing he rejected Mr Richter’s attacks on the credibility of witnesses and criticisms that Victoria Police had not conducted a proper investigation.

He also rejected accusations by Mr Richter that complainants “made up” complaints to avenge Dr Pell and to try and destroy him for the abuse committed by other Catholic clergy.

“It does not fundamentally impact on the reliability of the evidence,” Mr Gibson said.

A book written on Dr Pell by ABC Louise Milligan was criticised by Mr Richter who said she was simply “out for fame and fortune”.

He said the publication of Cardinal: The rise and fall of George Pell in May last year, before charges were made in June, damaged the prospect of a fair trial.

“What’s out there in the public mind is a mishmash of allegations and fantasy,” he said.

He pointed out the book was still on sale interstate and on the internet.

Mr Richter earlier apologised for calling for the magistrate, Ms Wallington, to be dismissed from the case last month, admitting he lost his temper.

He also apologised for being “brutal” with some of the witnesses.

“I confess what might be considered brutality. It’s necessary sometimes to expose perjury,” he said.

“I apologise for the manner but not the content.”

Mr Richter said it was wrong that the current climate of “political correctness” and attitudes by victim groups meant accusers making complaints were automatically believed.

Cardinal Pell, 76, who is currently living in a seminary in Sydney while he fights the case, did not attend the hearing.

He did attend each day of the four-week committal hearing last month which heard from 50 witnesses, including his accusers.

The former Ballarat priest, who has consistently strongly denied all the allegations against him, hopes to clear his name and return to his senior role in Rome alongside Pope Francis.

The Cardinal will come to court on May 1 for the final decision by Ms Wellington on whether the case should proceed to trial at a higher court.

Cardinal Pell case ‘all lies’ and should be thrown out: Lawyer