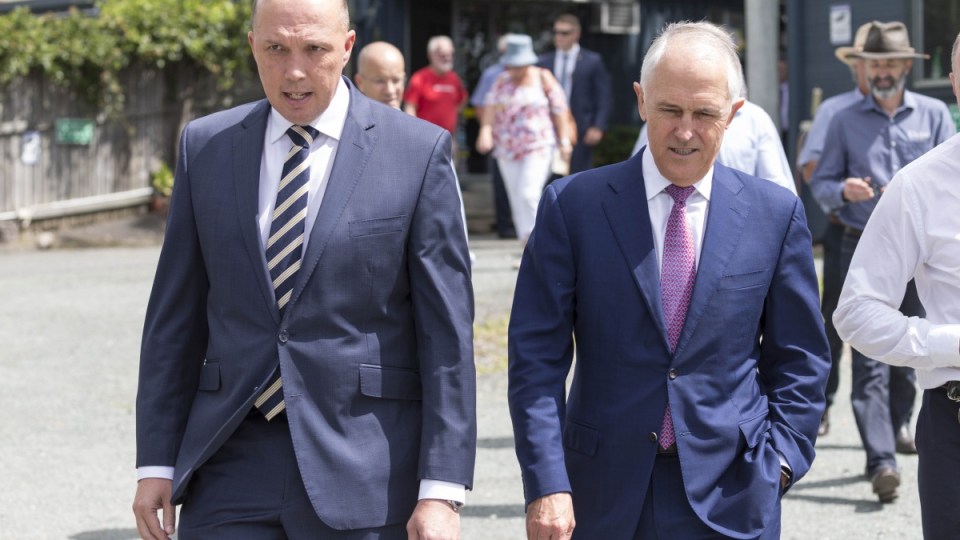 It's been a bad week for Malcolm Turnbull and Peter Dutton. Photo: AAP
analysis

Love him or loathe him, it was hard not to feel at least a bit sorry for Malcolm Turnbull this week.

The dreaded 30th Newspoll finally came crashing down upon the PM, he was roughed up on a daily basis by the usual conservative commentators and news outlets, and both the former PM and former deputy PM helpfully suggested Mr Turnbull should probably resign before the end of the year.

Less obviously, there was another senior Turnbull minister who also would have been very glad to see the end of this difficult week. That minister is Peter Dutton.

On the face of it, the Home Affairs minister actually had a good week.

He was given several opportunities to confirm that he wanted to be prime minister ‘one day’, and continued the campaign to bring persecuted South African farmers to Australia – which would have gone down well with the South African ex-pats in his marginal electorate.

But Mr Dutton likely didn’t welcome Tuesday’s story in The Australian, which reported that he’d canvassed cutting Australia’s immigration intake by 20,000 with cabinet colleagues in late 2016 and early 2017.

In one of the many follow-up interviews done this week, the author of that front-page story said he happened upon the Dutton proposal when researching his other big yarn of the week – an excoriating exposé of Mr Turnbull’s office and the behaviour of the PM’s closest advisor, Sally Cray.

That exposé relied almost exclusively on anonymous sources, although Tony Abbott and his former adviser, Peta Credlin, were among the few who provided comments on the record. The story also recounted – but did not attribute to a source – several conversations that took place between Barnaby Joyce and Mr Turnbull.

Similarly, the story on Mr Dutton’s proposed cut to immigration relied on the word of unnamed ministers.

Interestingly, the story did not indicate whether these were current or former ministers, such as those who’d left Cabinet since the time of the reported discussions.

Last week Mr Dutton pointedly said he wouldn’t serve in the ministry if he couldn’t be loyal to Mr Turnbull.

It’s also clear from comments made this week in support of the PM by the government’s other senior conservative, Mathias Cormann, that he shares this view.

While these two conservative leaders stand with Mr Turnbull, the bulk of next-generation conservatives will also stick with the current PM.

This impasse is understandably causing a great deal of frustration in the Abbott camp, which currently has around 10 votes in the Liberals’ party room.

The story about Mr Dutton’s ‘secret plan’ to cut immigration should be viewed in this context.

Far from being a leak by Minister Dutton to further his own agenda, the story looks more like an attempt by Mr Abbott and his supporters to drive a wedge between the minister and those in the government, including Mr Turnbull and Treasurer Scott Morrison, who argue the cut is unwarranted.

Once placed under pressure by this tactic, made worse by Mr Turnbull’s clumsy denial of the story, the Home Affairs minister nevertheless did his best to defuse the situation.

He confirmed the proposal was discussed with Cabinet colleagues, but also claimed the PM was correct in saying the discussions did not take place in cabinet (although the story did not claim they did).

What’s more, Mr Dutton explained later in the week, the proposed cut is redundant because the actual immigration intake is now lower than he proposed back then.

Meanwhile, Mr Abbott has been prominent in the news this week, thanks mainly to the embedded Sky News team that accompanied the former PM during the week-long Pollie Pedal and seemingly televised his every waking move.

Mr Abbott initially devoted much of his Sky News exposure to continue his push for a government-owned, coal-fired power station.

But once the story about Mr Dutton’s proposal to cut immigration hit the media, Mr Abbott seized the opportunity to call Mr Turnbull ‘tricky’ and ‘lawyer-like’ for denying the proposal was discussed.

Perhaps the strongest indicator of the Abbott camp trying to use the issue to chip Mr Dutton away from the PM came when Mr Abbott slyly added that he was firmly in the ‘Dutton camp’ on the matter.

However, given Mr Dutton’s clear reluctance to undermine the PM and his revelation that the cut in migrant numbers has already been achieved, immigration is unlikely to be the issue that brings down Mr Turnbull.

If or when Mr Dutton and Mathias Cormann move against the PM, it will be because they believe someone other than Mr Turnbull can save the furniture at the next federal election.

And given they reportedly despise the next most popular Liberal MP – namely, Julie Bishop – that move is unlikely to occur until another popular candidate emerges.

Sadly for Mr Abbott, even after a week of uncritical exposure on Sky News, that candidate is also unlikely to be him.

Peter Dutton, the minister who had an even tougher week than Malcolm Turnbull