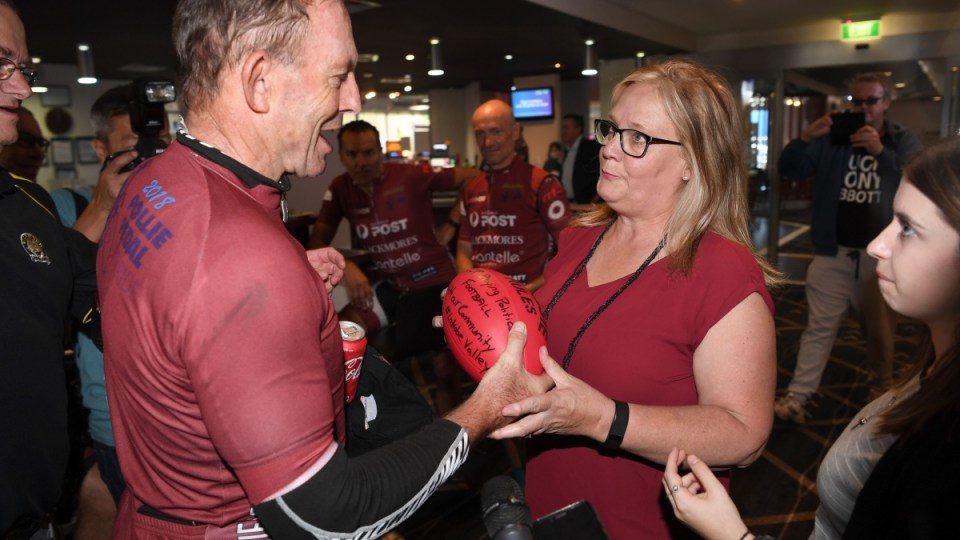 A Lycra-clad Tony Abbott has been chased and accosted by anti-coal protesters after arriving in southeast Victoria on the Pollie Pedal charity ride.

The former prime minister brushed off questions about the coalition’s 30 consecutive Newspoll losses and the Liddell power station as he left the Morwell RSL on Monday.

“I’ve done my (press conference) for the day,” he said.

Voices of the Valley president Wendy Farmer approached Mr Abbott as he met with RSL members.

She handed him a red football and declared “Stop playing political football with our community”.

“There’s a whole community outside waiting to speak to you,” she yelled, following Mr Abbott.

It’s a bit of an insult you’re not actually talking to them.”

Club officials told Ms Farmer to leave and Mr Abbott carried on, speaking to a gathering of the club’s women’s auxiliary and apologising for his outfit.

“Just be grateful ladies I’m not in my budgie smugglers,” he quipped.

Mr Abbott is a member of the new Monash Forum, a group of MPs pushing for more investment in coal-fired power, including in the Latrobe Valley region.

Outside, Ms Farmer and a group of fellow protesters held signs reading “Stop Adani” and “No More Coal”.

Mr Abbott and fellow Liberal MPs Angus Taylor, Kevin Andrews and Andrew Wallace are among a 55-strong pack pedalling 1000km to Canberra to raise money for the Solider On charity.