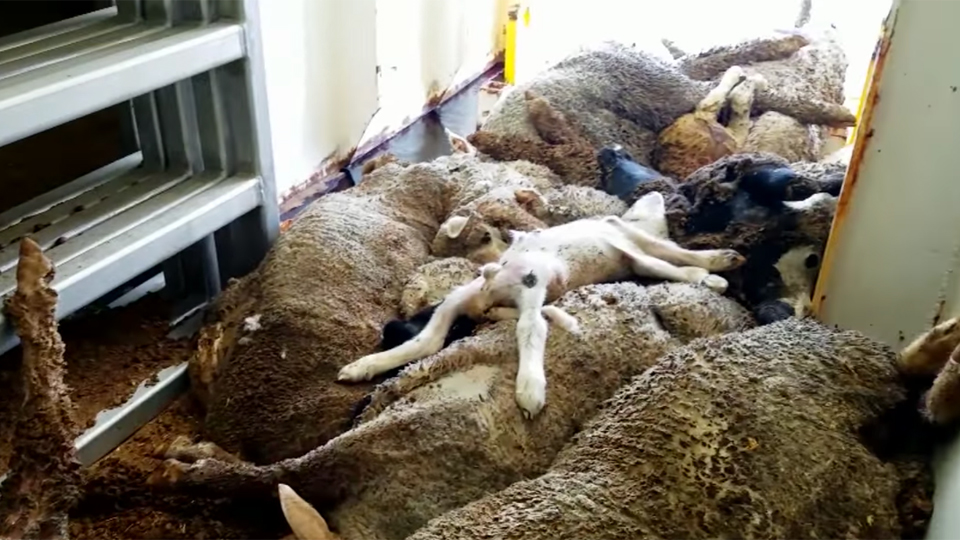 The deaths of almost 2500 sheep on their way to the Persian Gulf sparked the review. Photo: 60 Minutes

Maritime officials have barred a live export ship from leaving Australia with 65,000 sheep bound for the Middle East, hours after the airing of disturbing footage showed hundreds of sheep dying in squalid conditions on the same ship months earlier.

Late on Sunday night, inspectors from the Australian Maritime Safety Authority (AMSA) refused to grant permission for the Awassi Express to leave Fremantle Port, based on a lack of airflow to sheep pens.

The ship is due to transport the 65,000 sheep and 250 cattle to Kuwait, United Arab Emirates, Oman and Qatar on Tuesday.

“AMSA has advised the master and ship operator that they will have to arrange a third party air flow verification report to prove compliance with air flow standards before an Australian Certificate for the Carriage of Livestock can be issued,” AMSA said in a statement.

Earlier on Sunday, Nine Network’s 60 Minutes program aired video filmed by a navigation officer aboard the Awassi Express on multiple voyages from Australia to the Middle East showing thousands of sheep tightly packed into pens, panting in extreme heat.

More than 1300 sheep allegedly died in two days during an intense heatwave in the Persian Gulf in August last year.

The navigation officer told 60 Minutes that crew fainted while the sheep, unable to leave the boat, were essentially cooked alive “in an oven”.

Crew members were seen tossing carcasses from the boat into the sea while others fought for food or collapsed in filth below deck.

It is alleged Emanuel Exports was behind one of the recorded journeys.

Industry regulations forbid pregnant sheep being exported on the ships but the footage shows young lambs crammed in with the flock.

“I have seen a lot of little young lambs die – they’ve been crushed under the feet of other animals,” the officer said in a video diary aired by 60 Minutes.

Earlier in the week, Agriculture Minister David Littleproud said he was “shocked and deeply disturbed” by the vision.

“This is the livelihood of Australian farmers that are on that ship – that’s their pride and joy,” he said in a video statement posted on Twitter.

“And it’s total bulls— what I saw taking place.”

The minister has requested an urgent briefing from his department and the industry.

He said he would take “strong action” against exporters, regulators or crew who failed to fulfil their responsibilities.