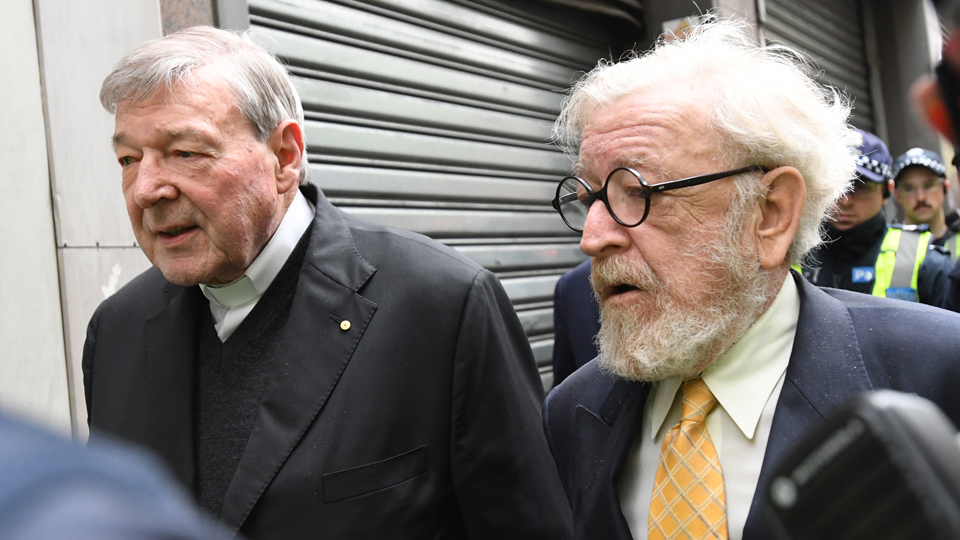 The lead barrister representing Cardinal George Pell has officially applied for the magistrate overseeing the historic sexual abuse case to be “disqualified” and stood down.

Robert Richter, QC, hit out at Belinda Wallington, the supervising magistrate at Melbourne Magistrates Court for sexual offences, alleging she was showing “bias” in the high profile proceedings.

In front of a packed court, the famously fiery and forensic Richter, 72, told Ms Wallington she should be stood down.

In an heated exchange regarding precise dates Cardinal Pell is alleged to have abused an unnamed accuser at a cinema in 1978, Mr Richter criticised the magistrate for not accepting a precise date as fact.

He said she “should accept” that a previous witness agreed newspaper adverts at the time proved the movie Close Encounters of the Third Kind was screened for several weeks from September 21 to October 4 – and not a few months earlier in March.

However, Ms Wallington ruled that the September date had not yet been accepted as a fact in the case.

“I’m astonished your honour,” Mr Richter said at the hearing in Court 22, with Cardinal Pell seated beside him.

“If your honour is predisposed to think there is another time possible that is avoiding the evidence.”

Mr Richter then stood up to make a formal application to Ms Wallington to be removed from the case altogether.

“I apply for your honour to be disqualified from further proceedings in this matter on the basis of biased view of the evidence.”

Ms Wallington, who has overseen the case since last year, immediately rejected the application, telling Mr Richter: “Your application is refused.”

Avenues of appeal on the matter are available to Cardinal Pell’s legal team, however the matter was not raised in court again on Wednesday.

Earlier in the hearing Detective-Superintendent Sheridan admitted Victoria Police set up a secret task force to try and establish allegations against Cardinal Pell when he was still Archbishop of Sydney.

The court heard “Operation Tethering” began in 2013 to seek out “intel” on Cardinal Pell, who moved over to the Vatican in 2014.

The Detective-Superintendent did not deny the accusation, saying: “Tethering was commenced as an intel probe around what offences the cardinal may have committed.

“I guess you could term it the way you did but I didn’t term it that way.”

Mr Richter also questioned Detective-Superintendent Sheridan and later David Rae, a detective senior constable who worked on Sano Task Force and is now with the senior proceeds squad, about the “failures” of Victoria Police to carry out a proper investigation.

Mr Richter said proper procedure was not followed in terms of interviewing potential witnesses, failing to seek Cardinal Pell’s diaries, improper note taking and failing to look into the psychological history of the accusers.

Mr Richter also revealed he personally presented a “thick dossier” of evidence, including witness statements, to show Cardinal Pell’s innocence to detectives in Rome when they flew to Italy to interview the Cardinal in October 2016.

It was also revealed for the first time that Victoria Police planned to arrest and question Cardinal Pell when he was supposed to attend a Royal Commission hearing in Melbourne in November 2015.

Ten days before Cardinal Pell was due to travel he announced he was too unwell to fly.

Mr Richter told Detective Senior Constable Rae it would have been “illegal” to arrest Pell just to question him.

The Cardinal, who stood aside from role as Vatican treasurer when he was charged in June last year, strongly denies the multiple allegations of historic sexual abuse against him.

The committal, which is hearing from a total of 50 witnesses, including complainants, will finish on Thursday.

The magistrate will then take time to assess submissions from both the defence and the prosecution.

The New Daily understands the decision about whether the case will proceed to a higher court for trial will take two weeks, possibly longer.