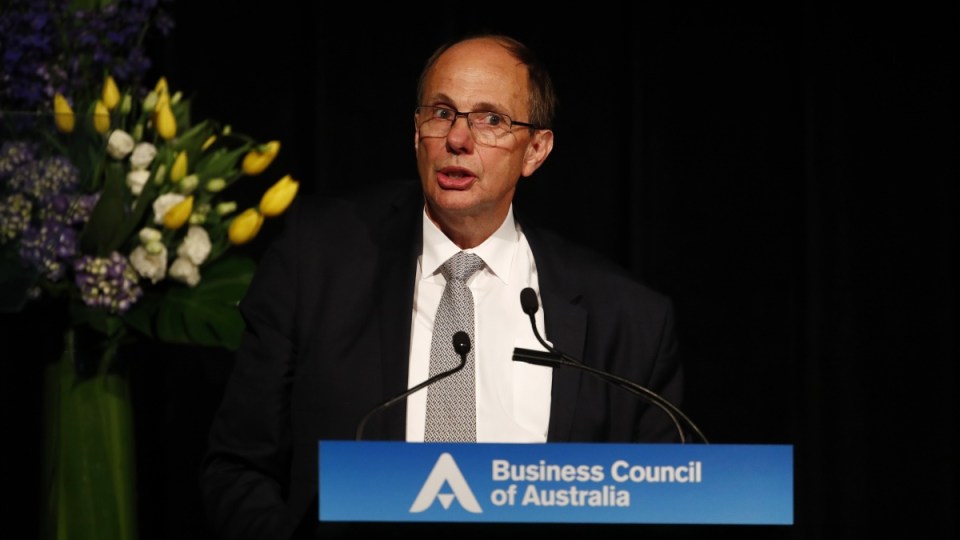 The Business Council's chairman Grant King has been making the case for the government's tax cuts. Photo: AAP

Labor has seized on a leaked draft letter from the Business Council to the Senate, arguing it shows the nation’s biggest companies baulked at a direct commitment to “pay our taxes” and “increase wages when conditions are right”.

The secret letter – which the opposition made public at the height of the political fight over company tax – asked the BCA’s members to commit to an “Informal Compact” that included five pledges.

These were: to create more jobs, invest more in Australia, avoid the offshoring of jobs, increase wages, and “pay our tax and show our commitment by signing the ATO’s tax transparency standard”.

However, a shorter letter sent to the Senate crossbench last week and signed by major companies including Qantas, BHP, Woodside and Fortescue Metals did not include the commitment to pay tax, the explicit pledge to raise wages, or the reference to avoid offshoring.

Instead, the letter said: “If the Senate passes this important legislation we, as some of the nation’s largest employers, commit to invest more in Australia which will lead to employing more Australians and therefore stronger wage growth as the tax cut takes effect.”

The development puts the business lobby on the back foot as it reboots its bid to win public support for the Turnbull government’s tax cuts plan through a new worker-focused advertising campaign.

Labor seized on the leaked letter on Wednesday, with Opposition Leader Bill Shorten saying the companies were “sufficiently cynical” that they were not even “bothering to pretend that they’re going to lift the wages of workers”.

The Govt just shut down debate on the BCA’s company tax letter.
The draft has now been leaked. In the draft there was a commitment to create jobs – deleted in final, a commitment to increase wages – also deleted , and they deleted a commitment to pay tax!#auspol pic.twitter.com/zKi8Ehi4jx

The opposition hammered the government over the letter during Question Time.

Deputy Labor leader Tanya Plibersek said: “When big business won’t commit to increase wages, why is the Prime Minister so committed to giving this business a $65 billion handout?”

Mr Turnbull said the government was not relying on the “on the altruism of company directors in framing tax policy”.

“We rely on economics,” he said.

“Business will respond rationally and will invest more where the incentives are to invest, will employ more and because you get stronger economic growth, you get more jobs.”

The BCA maintained on Wednesday the leaked document was part of a wider campaign that was “still ongoing”.

It was separate to the letter signed by 10 major companies last week, which had been put together quickly in response to comments from the crossbench, a spokesman said.

“In agreement with our members, the BCA began a process for developing a statement of commitments to the Australian people,” BCA chief executive Jennifer Westacott said in a statement.

We realise that in order to reestablish the community’s confidence in business we need to respond to the issues that matter most to them.”

“The statement will go beyond the company tax debate and outline what the business community will do to help the nation deal with the challenges of the future.”

Mr Turnbull also confirmed the government would take the tax cuts to the next election if they do not pass during this Parliament.

“I can assure the honourable member that we are committed to it, we will be committed to it today and at the next election and we welcome a contest with the Leader of theOpposition on tax,” he said.

The leaked letter comes a day after a separate leaked Business Council survey suggested less than one in five companies that responded would use proceeds from a tax cut to directly increase wages or employ more staff.

The government withdrew its company tax legislation from the Senate on Tuesday night after conceding it was two votes short.