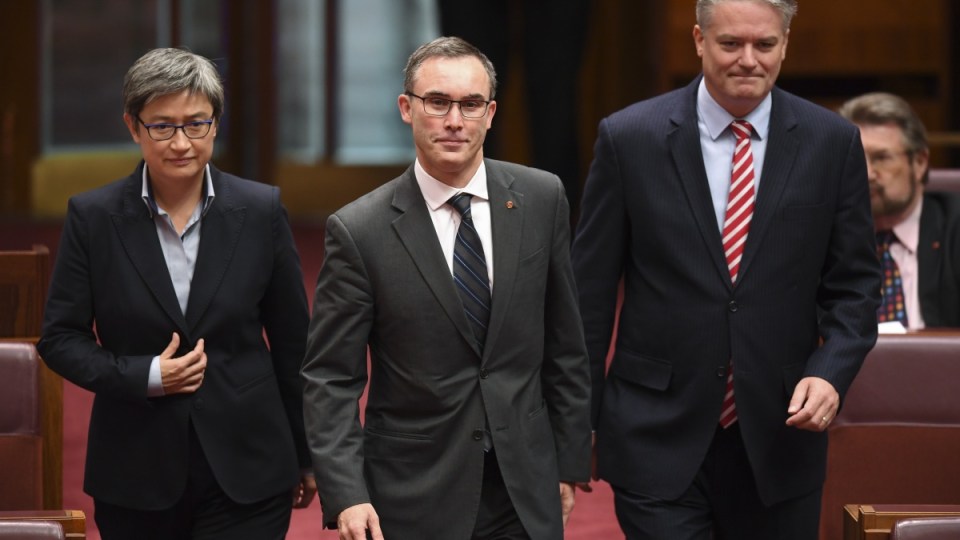 Tim Storer has been flung into the middle of a political fight over the nation's corporate tax rate. Photo: AAP

New South Australian senator Tim Storer is shaping as the key figure who will decide the fate of the Turnbull government’s $65 billion cut to company tax, particularly in the wake of One’s Nation’s decision on Thursday to support the measure.

The Turnbull government has edged closer to passing its company tax cuts plan after another new senator, Tasmania’s Steve Martin, backed the Coalition’s centrepiece economic reform, which has been labelled a “wrecking ball to the budget” by Labor.

Senator Martin, who entered Parliament following Jacqui Lambie’s demise over dual citizenship, confirmed he would back the plan to reduce the corporate rate from 30 per cent to 25 per cent for all businesses, saying the change would ensure Tasmanian businesses stayed competitive in global markets.

With Derryn Hinch also signalling possible support, the fate of the $65 billion tax plan looks likely to fall on Senator Tim Storer, who was only sworn in on Monday.

A spokeswoman for Senator Storer told The New Daily on Wednesday he was “meeting with a wide range of stakeholders” and still considering his position.

Senator Storer was a Nick Xenophon Team candidate at the 2016 election, but confirmed he would sit as an independent following a spectacular falling out with the party leader.

When Mr Xenophon quit Parliament to run in the South Australian election, he chose to nominate Rex Patrick to replace him, rather than Senator Storer, who was next in line on the NXT ticket.

Senator Storer launched an unsuccessful legal bid to overturn the decision, but was later granted a spot in Parliament after the NXT’s Skye Kakoschke-Moore was ruled ineligible over dual citizenship.

Before entering Parliament, Senator Storer worked as a business consultant who specialised in helping South Australian companies interact with China, and served on the Australia China Business Council.

The NXT helped pass tax cuts for companies with a turnover up to $50 million, but has refused to support the entire package.

On Wednesday, the Business Council of Australia (BCA)  seized on comments from Pauline Hanson that she would support the tax cuts if business leaders committed to raising wages.

In a bid to get Senator Hanson over the line, the BCA released a joint statement from the heads of 10 major companies arguing the tax cuts would lead to higher wages.

Some of Australia’s biggest employers have committed to investing more in Australia with a more competitive tax rate #auspol pic.twitter.com/M1nac5qGBJ

The letter, signed by company bosses including Qantas, BHP and Fortescue Metals’ Andrew Forrest, included no specific commitment that those companies would increase wages for their workers.

On Thursday Ms Hanson said she would support the cuts in exchange for 1000 new apprenticeships.

Senator Hinch has also said he would be open to supporting the proposal if businesses guaranteed they would also lift wages as a result, though he hoped to see such a pledge enshrined in the legislation.

On Wednesday night, he said he had asked Finance Minister Mathias Cormann for something in writing that “helps the workers, helps pensioners or somewhere in there that I can say, ‘OK, that’s a win for Joe Blow'”.

Shadow Treasurer Chris Bowen warned the legislation was an “unfunded wrecking ball to the budget”.

“We know that by the end of the next 10 years, these big business tax cuts will end up costing the budget over $15 billion each and every year,” he said.

The fate of the tax cuts plan may be the first material policy outcome stemming from last year’s citizenship crisis.

Like Senator Storer, the party Senator Martin stood for at the 2016 election, the Jacqui Lambie Network, is also opposed to the tax cuts.

Senator Martin was expelled from the party after he refused to give up his seat so Ms Lambie could return to Canberra.