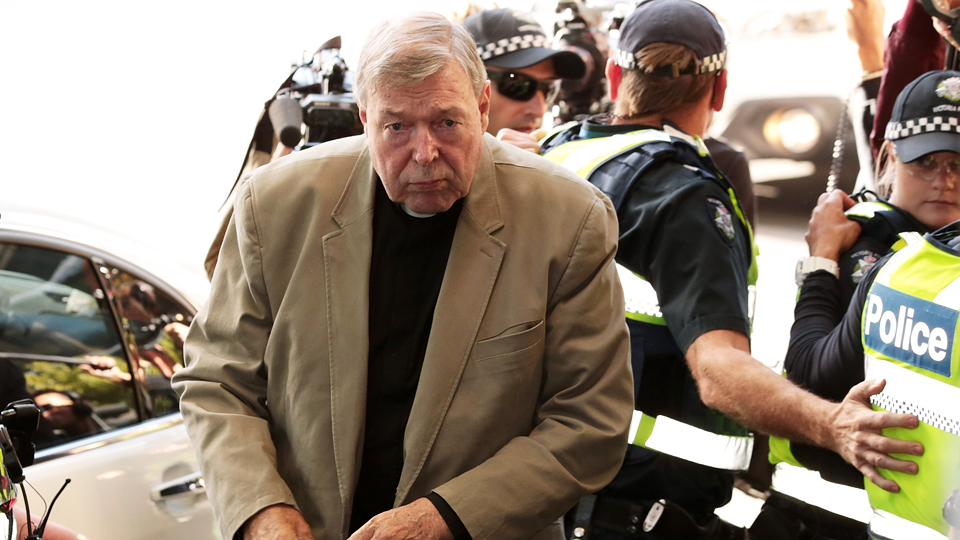 The Cardinal arrives at the Melbourne Magistrates Court on Monday. Photo: AAP

Day one of the committal case against George Pell has revealed just how fiercely his legal team will fight the multiple allegations of historic sexual abuse against the 76-year-old.

There were all the signs the battle would transcend one man and one case in a small Melbourne courtroom and threaten to rock the inner sanctum of power in Rome.

Cardinal Pell, who strongly denies all allegations, looked determined yet weary as he arrived by car just before 9.30am on Monday into a media scrum of international reporters, TV crews and photographers.

Following behind a few minutes later was his legal team led by Robert Richter QC.

The famously sharp-tongued defence barrister was in fighting form during the initial short 23-minute hearing, which dealt with legal administration and legal argument.

Snappy and argumentative, Mr Richter machine-gunned the legal argument point by point. In a recent interview the barrister said he strongly felt the Cardinal was innocent.

At the hearing, he alleged Victoria Police had breached a protocol reserved for high-profile defendants by failing to presume the Vatican treasurer’s innocence.

“We say that wasn’t followed because of a presumption of guilt,” he told the court.

Prosecutor Mark Gibson, SC, had previously applied for parts of the hand-up brief of evidence against Cardinal Pell to be withdrawn, but with a Shakespearean flourish Mr Richter leapt to his feet and strongly argued it should all be heard before the magistrate.

“If there is exculpatory material in the brief it should be tendered,” he said.

Many of the 30 reporters gathered in the packed courtroom, many from overseas outlets including The Wall Street Journal, New York Times and the BBC, quickly googled the word ‘exculpatory’ – discovering it meant “freed from blame”.

Mr Richter went on to accuse the prosecution of saying Cardinal Pell should not have a priest as his support person. They hadn’t. And he didn’t.

He was even sniffy about a black labrador by the name of Coop, which the magistrate ruled could sit at the feet of the complainants as they gave evidence during the two weeks of video-link testimony from a remote location.

In the end, Mr Richter said he would not object to the canine “as long as he doesn’t comment”.

He added sarcastically: “Whatever comfort the dog can give we don’t object to the dog.”

Cardinal Pell sat motionless through the hearing, in the company of his long time supporter and friend Katrina Lee, the executive advisor from the Catholic Archdiocese of Sydney.

The magistrate allowed the Cardinal’s application to have a male friend as a support person with him in court due to his age and poor medical condition.

Cardinal Pell, who flew to Australia when he was charged by Sano Task Force in June last year, has already missed a European summer and will soon miss the Roman spring. He bore the look of someone wanting to be anywhere but a courtroom.

He has spent his time in his home country in the safe confines of a Sydney seminary, rarely leaving the premises.

His expression remained calm despite the sound of frenetic typing coming from the media pack seated a few metres away, behind his legal team.

For two weeks he will witness Mr Richter’s cross-examination of the complainants in a closed court followed by two more weeks of evidence from 50 witnesses.