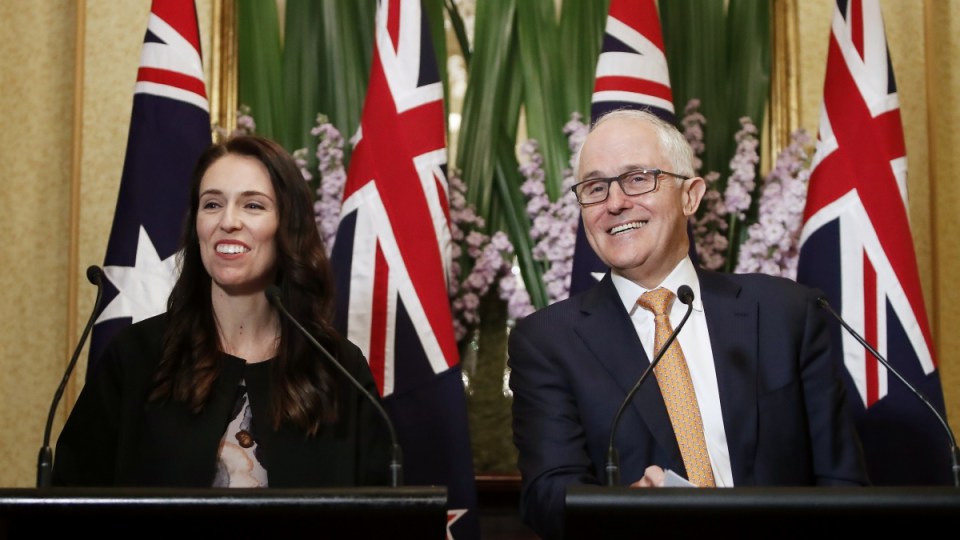 All smiles, between the New Zealand and Australian Prime Ministers, but the deportation issue is causing angst. Photo: AAP

Australia and New Zealand need to work together to maintain their influence across the Pacific region amid China’s growing footprint.

That was one of the key messages New Zealand Foreign Minster Winston Peters delivered in a keynote speech in Sydney ahead of Prime Minister Jacinda Ardern’s bilateral talks with Malcolm Turnbull on Friday.

“Pacific island leaders have more options and this is (leading) to a degree of strategic anxiety,” Mr Peters told the Lowy Institute overnight.

Mr Peter suspects both Australia and NZ sometimes become too preoccupied with other parts of the world and need to focus more attention on the local neighbourhood.

He acknowledged NZ, Australia, the European Union and US were grappling with a new reality of an increasingly “congested strategic space” in the Pacific.

Alluding to China’s foreign aid expansion, he said there were other countries with deeper pockets and that some Pacific leaders were attracted to easy money.

Mr Peters made the case for an expansion in NZ’s aid program and more co-operation with Australia.

“We need to better pool our energies and resources to maintain our relevant influence,” he said.

Mr Peters said it was important to be respectful of Pacific countries’ wishes to manage their own affairs, while at the same time maintaining emphasis on human rights, rule of law, transparency, good governance and democracy.

“Being small and isolated is no excuse for failing to strive for the very best,” he said.

Ms Ardern and Mr Peters are embarking on a Pacific island tour next week including visits to Tonga and Samoa, which are recovering from Cyclone Gita.

The fate of Kiwi convicted criminals deported from Australia will be on the agenda during the Australian and New Zealand leaders’ bilateral meeting.

As of late January, there were 170 New Zealanders, including 17 women, in Australian immigration detention whose visas were automatically revoked following a December 2014 crackdown on foreign-born convicted criminals.

Foreigners who have served more than 12 months in Australian jails have been steadily rounded up for deportation.

However, some New Zealanders who grew up in Australia and have weak ties across the ditch have appealed their deportations.

Ms Ardern acknowledged Australia’s legal rights to toughen up visa rules but flagged she’ll be putting a moral case to Mr Turnbull during their meeting.

A New Zealand parliamentary committee last week was told, 1023 deportees had been sent back in the last two years and 44 per cent of them had reoffended.

Australia, New Zealand must team up on Pacific policies