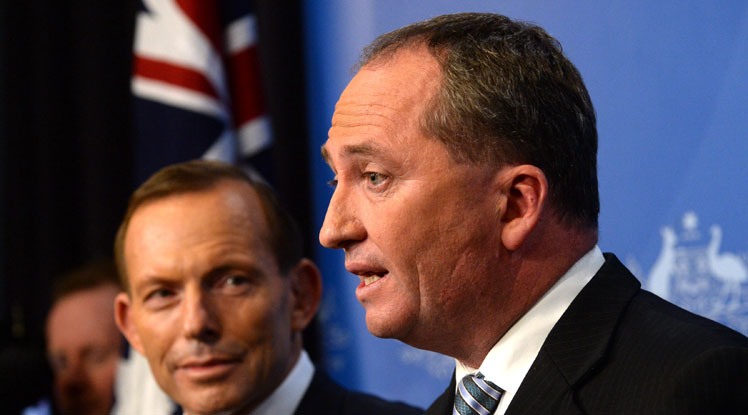 When it comes to political leadership changes, momentum is everything. If there’s an inadequate sense of momentum – or inevitability – about a changing of the guard, then it simply won’t happen.

But if there’s a tipping point, such as a leadership challenger resigning from cabinet or allegations of a leader’s serious misconduct, then the sense of inevitability can reach fever pitch and become an irresistible force. That’s when a leader usually steps aside, as Nationals leader Barnaby Joyce did on Friday.

The saga enveloping Mr Joyce was only one of two plots underway this week to increase the momentum for a political leadership change. One was ultimately successful, while the other – Tony Abbott’s – spectacularly crashed and burned.

It was well known that a minority of Nationals MPs had been trying to offload their shop-soiled leader, Barnaby Joyce, since his extra-marital affair with staffer Vikki Campion had been exposed by the tabloid media.

That effort failed due to a lack of clear-cut evidence that Mr Joyce had broken any rules or misused taxpayer funds. Matters weren’t helped by the PM’s bumbling effort to blast Mr Joyce out of the role, which made the Nationals leader even more determined to hang on.

In the end it took an official complaint of alleged sexual harassment against Mr Joyce – again splashed across the tabloids – to convince him to resign from the leadership for the good of the Nationals.

And so, although matters did not quite develop as the anti-Joyce forces had planned, they will get their leadership ballot next Monday. If the pro-Joyce forces still have the numbers, then a pro-Joyce MP will become leader. This could foreshadow a new era of friction between the Liberal and Nationals parties.

But for now, the week ended well enough for Malcolm Turnbull.

Not only was a line drawn under the Joyce affair but the PM’s nemesis Tony Abbott was slapped down by other conservative forces – both inside and outside the Liberal Party.

For the past fortnight, the embittered former PM and his enablers in the tabloid media have tried to twist Barnaby Joyce’s problems into a test of Malcolm Turnbull’s leadership.

That line failed to elicit much media interest, so Mr Abbott tried to push a few other buttons by using a speech to call on the Turnbull government to halve the immigration rate, apparently to reduce traffic congestion, bring down house prices, increase wages and “improve integration”. Oh, and to pick a fight with Labor.

It’s no coincidence Mr Dutton is now one of the government’s most influential decision-makers, courtesy of his mega Home Affairs portfolio, while Senator Cormann is even more powerful as the leader of the government in the Senate.

Both men appear to have been bolstering PM Turnbull’s support by ensuring that next-generation conservatives such as Alan Tudge and Angus Taylor are promoted through the ministry.

This week, Mr Turnbull’s conservative praetorian guard did even more to thwart Mr Abbott’s still-simmering ambition to damage, if not replace, the man who replaced him.

First, Treasurer Scott Morrison – no longer an Abbott supporter – rejected the former PM’s anti-immigration push as bad for the economy.

To add insult to injury, Mr Abbott was also slammed by one of his most ardent supporters in the media, foreign affairs writer and commentator Greg Sheridan, who wrote that he was “100 per cent wrong” on the call to drastically cut immigration.

Ms Credlin argued in her Sky News editorial on Thursday night that “the Coalition is like a dog scared of its own tail … frightened of debate [and] lacking the courage necessary to take the fight up to Labor.”

According to Ms Credlin, “when the bloke that won them government in a landslide has something to say, I reckon, with 27 Newspolls behind, it would probably be smart to at least listen.”

Mr Abbott echoed that view on Friday, writing in an opinion piece that he wasn’t going to cop “gratuitous criticism from ministers who are only in government because I led them there”, and that “you’d think a government that’s lost the past 27 Newspolls might be curious about how it could lift its game”.

Later on Friday, Mr Abbott threw the dummy further, claiming in a radio interview that “but for my efforts in 2010 and 2013, Turnbull wouldn’t be prime minister and his ministers wouldn’t be in office. So I think they should listen with a degree of respect.”

This would, of course, come as a surprise to voters, who were so sick of the dysfunctional Rudd-Gillard-Rudd Labor government that they threw it out in 2013. Tony Abbott simply amplified and exploited the momentum that grew from this voter dissatisfaction, to achieve the ultimate change in political leadership.

Tragically for Mr Abbott, his plan to recreate that momentum against Malcolm Turnbull was dealt a huge blow by his former supporters this week.

Like Barnaby Joyce, he should take at least the weekend to consider how he got it all so wrong.