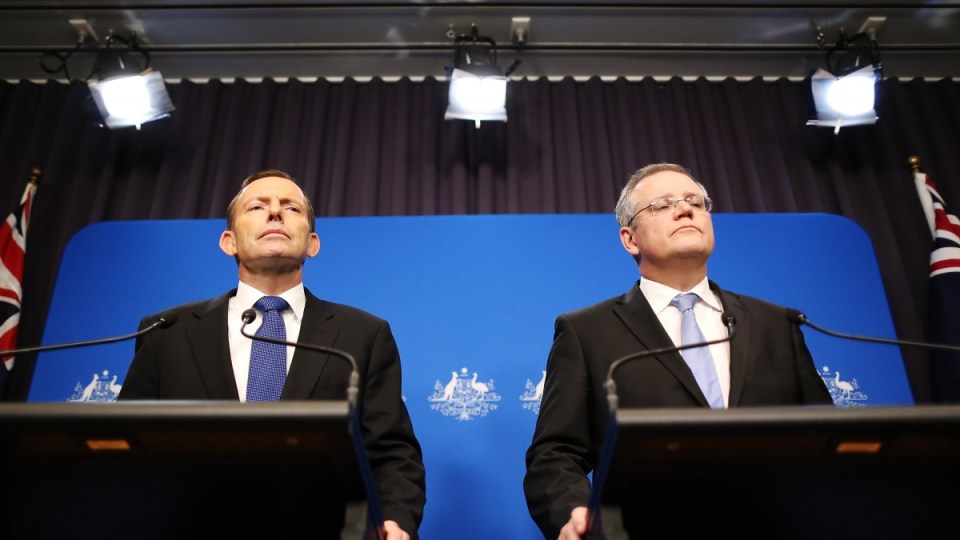 That was then: Tony Abbott (L) and Scott Morrison. Photo: AAP

Two senior cabinet ministers have slapped down Tony Abbott’s proposal to cut Australia’s migration intake, warning it could cost up to $5 billion over four years.

The former prime minister has again called for immigration to be cut in a bid to lower the cost of living, reduce pressure on infrastructure and the property market, and reduce crime rates.

Mr Abbott wants the permanent migration cap of 190,000 people to be reduced to 110,000, saying something has gone “badly wrong” when only 30 per cent of migrants are proficient in English.

“I want to bring people in as young as possible, as highly skilled as possible so they’re paying taxes for longer, they’re contributing to Australian society and they’re helping build our nation,” Mr Dutton said.

“That’s been the wonderful history of migration in our country.”

Mr Dutton had previously indicated he was willing to revise the permanent migration cap, but said today that was a general comment about ensuring the cap was in the national interest.

Morrison: Abbott never discussed that with me

Treasurer Scott Morrison gave a more blunt rebuttal of Mr Abbott’s proposal, saying he didn’t discuss it with him while he was Immigration Minister in Mr Abbott’s cabinet.

He said permanent migration to Australia had remained relatively stable since 2011 and said a perceived increase was due to a jump in international students and overseas tourists.

Every year since John Howard lost the 2007 election to Kevin Rudd, more of Australia’s population growth has been attributed to migration than a natural increase due to births.

The period under Howard was transitional, but brought substantial migration growth in its later years.

“The underlying cash balance would be impacted to the tune of about $4-5 billion by that sort of structural change to the permanent intake in Australia,” Mr Morrison said.

He also disagreed that a high migration rate automatically resulted in a higher crime rate, pointing out that permanent migrants have similar employment rates to others.

Permanent migrants, particularly skilled migrants, start businesses, they get jobs, they pay taxes, they invest in their communities, they run sports clubs, they make things happen.”

But he said he understood that many Australians were anxious about temporary migrant workers taking jobs and said Labor would further tighten visa restrictions.