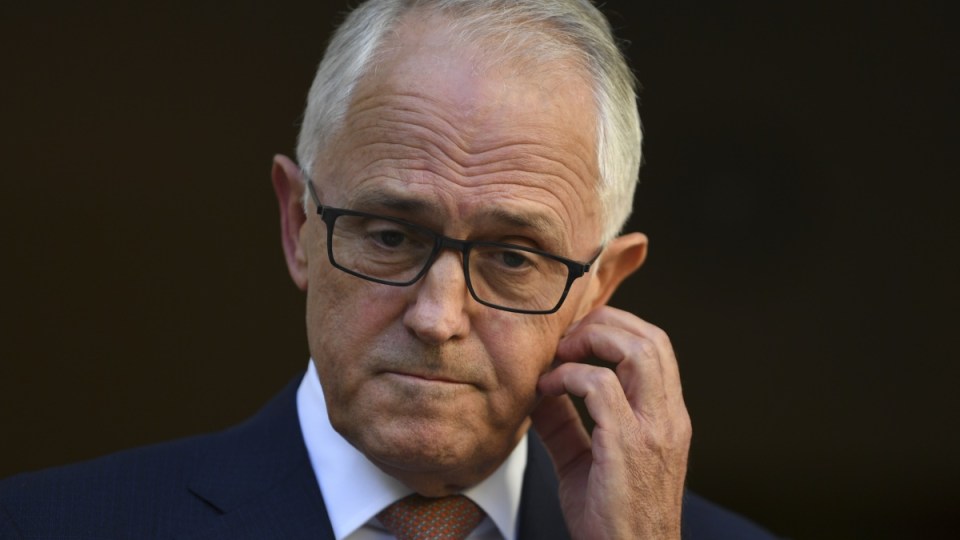 Malcolm Turnbull said the Deputy Prime Minister had "appalled us all'. Photo: AAP

Malcolm Turnbull has sought to draw a line under the Barnaby Joyce scandal by banning sexual relationships between government ministers and their staff and saying the Deputy PM had “appalled all of us” and should “consider his own position”.

As the embattled Nationals leader’s standing was further damaged on Thursday, Mr Turnbull took the dramatic step of personally criticising Mr Joyce’s extra-marital affair with his now-pregnant former staffer Vikki Campion, describing the “world of woe” it had caused her, his wife Natalie and his four daughters.

Following Question Time, the Prime Minister called a snap press conference where he revealed he had encouraged the Deputy PM to take leave next week rather than serve as Acting PM.

Asked twice why Mr Joyce should not resign given the ministerial code was being changed as a result of his behaviour, the Prime Minister noted the Deputy Prime Minister was the leader of the National Party.

Mr Turnbull said Mr Joyce had assured him he had not breached the current rules, though he would have “to consider his own position, obviously“.

“But I think we know that the real issue is the terrible hurt and humiliation that Barnaby, by his conduct, has visited upon his wife, Natalie, and their daughters and, indeed, his new partner,” the Prime Minister said.

“Barnaby made a shocking error of judgement in having an affair with a young woman working in his office. In doing so, he has set off a world of woe for those women and appalled all of us.”

Announcing he was changing ministerial standards to ban ministers from having sexual relations with their staff, a solemn Mr Turnbull conceded if Mr Joyce had done “what he did last year tomorrow or today he would be in breach of the code”.

“But look, again, let’s not kid ourselves. There was a different culture here that had gone on for a long time,” he said.

“I think many women in this building … understand very powerfully what I am saying. This is a change I am making from today.

“I don’t care whether they are married or single, they must not have sexual relations with their staff. That’s it.”

The opposition was unimpressed with the move, saying Mr Joyce had breached ministerial standards and should be sacked.

“This isn’t about Barnaby’s private life, it’s about his use of public money and use of his ministerial office,” Labor’s Mark Dreyfus said.

“Malcolm Turnbull has called his deputy’s behaviour a shocking error of judgment, and has told him to consider his position.

“Turnbull should have sacked his deputy today, instead he’s handed him a leave pass.”

Under the changes announced on Thursday, ministers would be sacked if they were found to have had sexual relations with their own staff, but could do so with employees in other ministerial offices. Similar standards have been implemented in the corporate world.

Mr Turnbull said the events of this week had revealed “some very serious issues about the culture of this place”.

“The truth is … most of the ministers, most of the bosses in this building if you like, are men and there is a real gender perspective here,” he said.

Labor laid out the case of Mr Joyce to go on Thursday, claiming he did not adequately disclose the free use of an apartment belonging to wealthy businessman Greg Maguire, had later misled Parliament over the arrangement, and had also breached the rules by moving Ms Campion to the offices of two other National Party politicians.

The opposition also pointed to a $5000 contract handed to Mr Maguire’s business to hold an Agriculture Department event at his pub in Armidale.