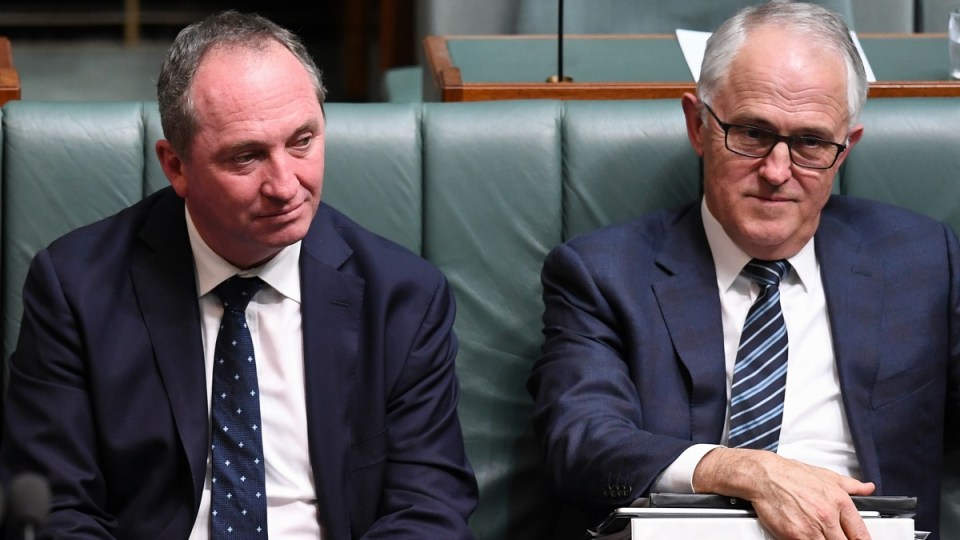 Malcolm Turnbull is facing a political storm over the Barnaby Joyce affair as Labor vows to pursue whether the Deputy Prime Minister’s former staffer and now pregnant partner received any special treatment while she worked for the government.

Amid increasing nervousness among Coalition MPs about Mr Joyce’s situation, Labor sharpened its language on Sunday after it was revealed his new partner Vikki Campion was handed two highly-paid jobs with Nationals politicians, first with Matt Canavan and then with Damian Drum.

The change in tone came as, at least publicly, government MPs backed in Mr Joyce, with a few offering thinly veiled threats to the opposition to back off or risk retribution.

Asked about Labor’s decision to pursue the matter, Foreign Minister Julie Bishop replied “people in glass houses”, while Nationals MP Michelle Landry said that “we could start doing a bit of digging as well”.

But speculation has begun to swirl that Mr Joyce’s position may come under threat, with one renowned political commentator predicting his career was over and Nine News reporting anonymous calls within the government for Mr Turnbull to request his resignation.

The position of Nationals leader – and therefore deputy prime minister – is decided by the Nationals party room. Mr Joyce confirmed to the ABC on Sunday he planned to re-contest the next election.

Signalling that the issue is likely to dominate the week in Parliament, Labor’s Deputy Leader Tanya Plibersek said Mr Joyce and the Prime Minister had questions to answer over whether taxpayers’ money was misused.

“It does appear that these jobs were created in addition to the jobs that already existed in these offices, and they were at quite high rates of pay,” she told the ABC’s Insiders.

“I think that is something that either the Prime Minister, who has ultimate responsibility for signing off on these things, or the Deputy Prime Minister ought to answer questions about.”

Ms Plibersek stressed the “only area in which there is a genuine public interest” was the “expenditure of taxpayer funds” and that Labor did not want to add to Mr Joyce’s family’s distress.

The Nationals have said Mr Turnbull was not personally aware of the staffing arrangements, though his office had an administrative role by relaying the changes to the Department of Finance.

Finance Minister Mathias Cormann backed Mr Joyce on Sunday, though he would not address the specific circumstances of Ms Campion’s employment.

“All of my advice is that everything was absolutely above board and I am very surprised the Labor Party would go there,” Senator Cormann told Sky News.

He said Ms Campion “held a position with National Party ministers for which she was eminently qualified and which she obtained on merit”.

Last year, after Mr Turnbull learned of the affair, Ms Campion was reportedly transferred to a “high-salary” digital and social media position working for Senator Canavan.

When that job ended, she was moved to a newly created position as a media adviser in Mr Drum’s office, according to the Daily Telegraph.

It is believed she was paid in the vicinity of $200,000 and the job was not advertised.

Ms Plibersek said: “The thing that is to be asked in this situation is: was this job necessary? Was there work to be done at this skill level? What was the case made for having to hire someone additional into those offices?”

“Maybe not in the short-term, but certainly in the medium-term. I would not expect to see Barnaby leading the Nationals into the next election,” she said on Insiders.

Mr Joyce is also likely to come under fire this week over revelations he was gifted free rent at an Armidale home owned by a wealthy local businessman.

The Nationals leader, who is now living in a townhouse in Armidale with Ms Campion, according to The Australian, has regularly argued that Sydneysiders unhappy with skyrocketing house prices should move to a regional area.