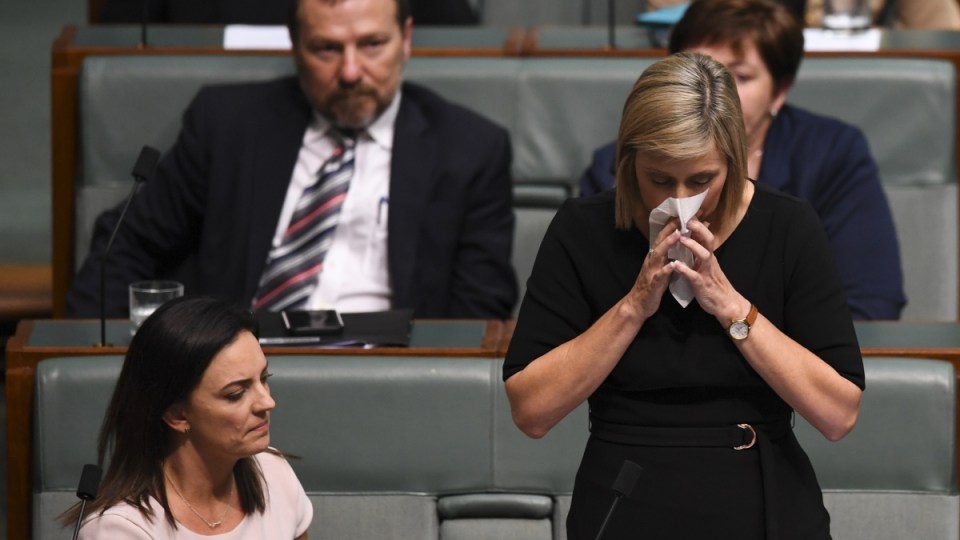 Embattled Labor MP Susan Lamb has confirmed she will not resign over citizenship, instead revealing the “deeply personal story” that prevented her from obtaining the document needed to renounce her British citizenship.

In an emotional speech to Parliament on Wednesday, the Longman MP confirmed she would not resign despite Coalition threats to refer her to the High Court if she failed to quit.

A teary Ms Lamb said had been told she had no legal right to obtain her parents’ marriage certificate, which the Home Office requested after she applied to renounce her citizenship before nominating for Parliament last year.

She explained to the Parliament why she could not obtain the document from her mother, given her father had died 20 years ago.

“I want to explain to the house why I can’t obtain a copy of my parents’ marriage certificate. It’s a complex and a traumatic story. A story that I don’t usually share,” she said.

“One day when I was about six years old, my mother dropped me off at a school, and she never came back to pick me up.”

Some time later, Ms Lamb said, her mother came to the family home.

“A car turned up … my mother got out, words were exchanged and then my mother drove away. My dad was now a single parent, an amazing man whose example I try and live up to every day of my life,” she said.

Susan Lamb's deeply personal story. She says she is estranged from her mother and cannot obtain the document she needs to renounce UK citizenship herself. #auspol pic.twitter.com/cTRMrCZWof

Ms Lamb said the pair attempted to build a relationship “many years ago” but “regrettably that failed”.

“Now I don’t know what was going on in my mum’s life back then,” she said.

“I don’t know why she dropped me off and never came back… I don’t know what’s going on in her life now. The fact is, we don’t have a relationship.

“The fact is, my mum is not around to give me access to her marriage certificate. And Dad, he passed away nearly 20 years ago and spent the decade before that unable to care for himself and in need of 24-hour care.”

Last month, The Australian reported Ms Lamb’s mother had told the newspaper: “I didn’t know about her going into politics until it was pretty much all over and done.”

“It was a big surprise. She didn’t contact me but I would have definitely helped her.’’

The Coalition indicated on Monday it was likely to refer Ms Lamb to the High Court if she did not resign.

It believes she should face a byelection because she still holds British citizenship, and showed no sign of letting up following her speech on Wednesday.

Liberal MP Craig Laundy told Sky News he empathised with Ms Lamb’s situation but said she should be referred to the High Court.

“We have a dual citizen in the Parliament,” he said.

Ms Lamb attacked the Turnbull government for relentlessly pursuing her over the issue.

“I don’t speak about this trauma. So when people ask me why I couldn’t just call my mother, well this is why and I hope this story gives you the answer,” she said.

“I’d rather not share this with my closest friends, let alone the Parliament of Australia.”

Ms Lamb maintained on Wednesday she had taken “all reasonable steps” to renounce her citizenship and was confident she was eligible to serve in Parliament.

She noted she had supported the motion last year to refer herself, two other Labor MPs, NXT MP Rebekha Sharkie, and a group of Liberals to the High Court.

Ms Lamb holds the marginal seat of Longman, north of Brisbane, which was previously held by Liberal MP Wyatt Roy.