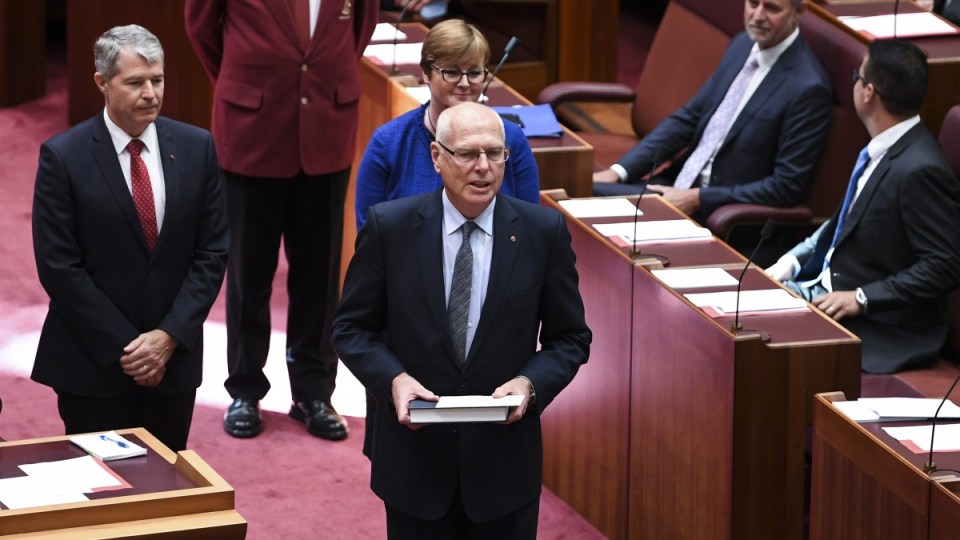 The New Daily can reveal that on May 4, 2017, the former Australian Defence Force general’s Twitter account retweeted a post that said: “Exam. I was asked to name two things commonly found in cells. Apparently ‘young Muslims’ and ‘Somalians’ were not the correct answers.”

On Wednesday morning, Senator Molan’s account was no longer recorded to have retweeted the post, but in an interview with Sky News on Tuesday, the Liberal politician expressed regret he had not cleaned up his social media before entering parliament.

At the time, the then-security commentator’s profile said “retweets not indicate approval (sic)”.

The revelation followed the news on Tuesday that Senator Molan would close down his personal social media accounts after Fairfax Media reported he had shared Facebook posts from the far-right, anti-Muslim group, Britain First.

He did not apologise, but said it was “unwise” to share the posts because it “allowed my political opponents to misrepresent me”.

On Tuesday night, the account was updated with a new bio describing him as a New South Wales senator and a number of posts were removed from the profile.

A spokesman declined to comment on the retweet, pointing The New Daily to the statement released on Tuesday night.

“Now that I have my Senator’s social media in place I have closed down my personal social media,” the statement said.

“It was unwise to re-post the two videos because they allowed my political opponents to misrepresent me.

“Of course I am not racist, nor anti-Islam, and I do not support Britain First. I am anti-violence and anti-civil disturbance. I am part of the most successful multicultural nation on earth and I am proud of that.”

“Given the evidence that is publicly available, I just can’t believe the PM would continue to defend Jim Molan,” he told The New Daily.

Greens leader Richard Di Natale said: “Our elected leaders should use their platform to bring people together, yet the Coalition’s newest Senator Jim Molan is backing in his Islamophobic views.

“Malcolm Turnbull has no excuse. He must behave like a Prime Minister and insist Jim Molan apologise.”

The Prime Minister came to Senator Molan’s defence on Tuesday, noting his army record and saying he was a “great Australian” that did “not have a racist bone in his body”.

The joke retweeted by Senator Molan last year appears to be a variation on another that has done the rounds on the internet.

In 2016, Tom Angel, a top official with the Los Angeles County Sheriff’s Department, quit his post after he forwarded emails with racist jokes and anti-Muslim statements.

Among the emails he was said to have forwarded was: “I took my Biology exam last Friday. I was asked to name two things commonly found in cells. Apparently, ‘Blacks’ and ‘Mexicans’ were NOT the correct answers.”

Other shared posts reviewed by The New Daily include the senator’s retweets of articles from the website ‘Barenaked Islam’, which bears the tagline: “It isn’t Islamophobia when they ARE really trying to kill you.”

Archived posts show Senator Molan shared articles with headlines such as ‘AUSTRALIA: Fury over development plans for a Muslim-only ‘NO GO Zone’ in Brisbane’ and ‘ITALY: Government orders small towns to find space to house and feed 250,000 African Muslim freeloaders in 2017′. The second article refers to “third world Muslim invaders’.

Those retweets were also removed by Wednesday morning.

On Monday, Fairfax Media reported Senator Molan had shared posts from Britain First, a group that came to prominence after Donald Trump shared its posts last year. The US President has since apologised for doing so.

Peter Dutton touted as next Liberal leader as he claimed victory in Dickson
‘The urgency of the situation’: WHO steps in as monkeypox cases erupt around the world
Volodymyr Zelensky: How war will end as Ukraine ‘breaks backbone’ of Russian army
Jim Chalmers decries Coalition waste as Labor hits the hustings amid downpours in Queensland
Anthony Albanese, Scott Morrison cast their votes in Sydney
Australian aces at French Open out to show there’s life after Ash Barty
Jetstar bans unruly passengers after vile mid-air outburst
Today's Stories