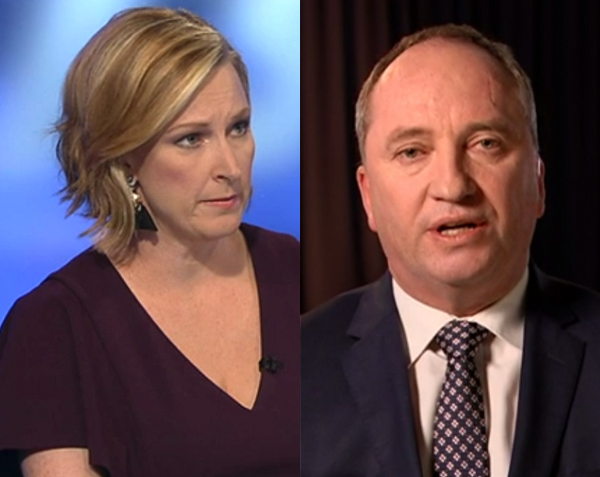 Barnaby Joyce has admitted his marriage breakdown was “one of the greatest failures of my life” but refused to confirm or deny reports he impregnated a former staffer.

In a nationally televised interview with the ABC’s Leigh Sales on 7.30, the Deputy Prime Minister would not be drawn on the details of the relationship. He said repeatedly that “private matters remain private”.

“Once we start going through this salami slicing of a private life, where does it end?” he said.

Debate has raged in the media over the ethics of The Daily Telegraph choosing to report on Wednesday’s front page that Mr Joyce had allegedly started an intimate relationship with Vikki Campion while she was employed in his office.

Ms Campion is a former journalist at the Telegraph who worked as a media advisor to Mr Joyce before moving to Senator Matt Canavan’s office in April. She is reportedly living with Mr Joyce at Armidale, New South Wales.

The Deputy PM insisted throughout the interview that the story was not only an invasion of privacy, but also was not newsworthy.

“I can’t quite fathom why basically a pregnant lady walking across the road deserves a front page. I don’t know what the political purpose is to that,” Mr Joyce said.

Ms Sales was careful to restrict her questions to matters she considered were safely inside the “public interest”,  such as whether he had ever used taxpayer-funded trips to conduct the affair.

Mr Joyce denied this: “Nothing [has] turned up because there’s nothing there.”

Mr Joyce refused to comment on whether the workplace relationship was inappropriate.

“Is that the right way for a boss to act?” the journalist asked.

“I’m not going to go into all the iterations of a private relationship, and there’s nothing beyond the consensual,” he replied.

“This is a private matter, and everybody’s trying to sort of second guess what is a deeply private matter and I’m just not going to do that.”

Ms Sales asked whether the allegations went to questions of his “loyalty and trustworthiness” as a politician.

Mr Joyce replied that his marriage breakup did not make him “terribly unusual”.

“I am not for one minute saying that that is an admirable trait. It’s obviously incredibly painful for everybody involved,” he said.

“I can say quite openly it’s probably one of the greatest failures of my life. I’m not proud of it but that is, you know, in essence the humanity of who we are, OK.”

Mr Joyce’s wife, Natalie, issued a statement on Wednesday saying she was “deceived and hurt” by her husband’s infidelity.

“I am deeply saddened by the news that my husband has been having an affair and is now having a child with a former staff member. I understand that this affair has been going on for many months and started when she was a paid employee,”  Ms Joyce was quoted as saying by News Corp.

“This situation is devastating on many fronts. For my girls who are affected by the family breakdown and for me as a wife of 24 years, who placed my own career on hold to support Barnaby through his political life.

“Our family life has had to be shared during Barnaby’s political career and it was with trust that we let campaign and office staff into our homes and into our lives.

“Naturally we also feel deceived and hurt by the actions of Barnaby and the staff member involved.”

Politicians from all sides of parliament, including Labor and the Greens, have defended Mr Joyce’s right to privacy and criticised The Daily Telegraph‘s decision to publish the story.

But many senior journalists have defended the public’s right to know.