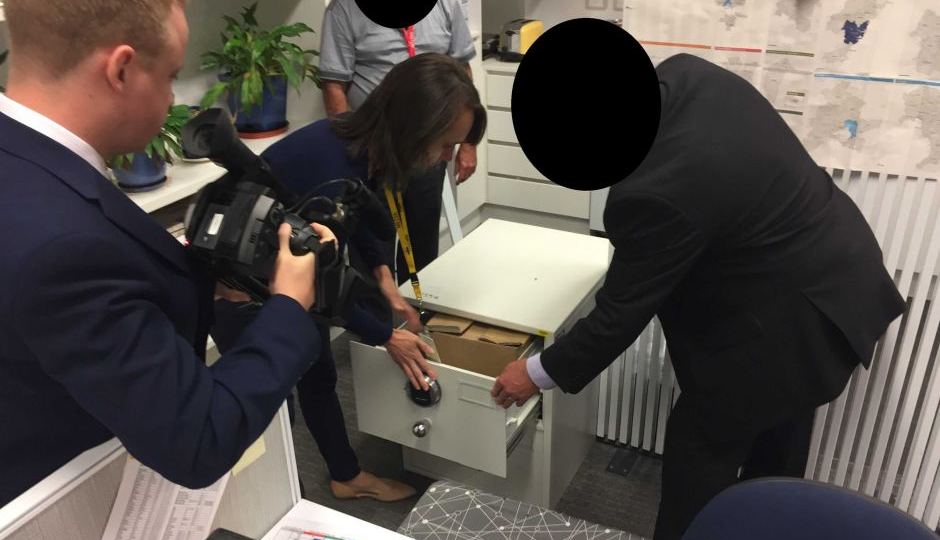 The Cabinet Files were locked away in the safe, delivered to the ABC Parliament Bureau by ASIO officers. Photo: ABC

Former prime minister Kevin Rudd has launched legal action against the ABC after it published details from a secret cabinet document related to his Labor government’s home insulation scheme.

Mr Rudd’s explosive move comes after ASIO officers, in early-morning operations in Canberra and Brisbane, secured the thousands of top-secret and classified cabinet files obtained by the ABC.

ASIO officers delivered safes to the public broadcaster’s Parliament House Bureau in Canberra and South Bank studios in Brisbane about 1am, just hours after the massive national security breach was revealed.

The ABC still has access to the documents, now kept in the safes, and negotiations are still underway between lawyers for the ABC and the Department of Prime Minister and Cabinet (PM&C).

Mr Rudd released a statement Thursday morning saying the document referred to by the ABC in its report was about financial and administrative risks to the program for the Commonwealth, not safety risks, and rejected suggestions he ignored safety warnings as a “lie”.

“For these reasons, legal proceedings against the Australian Broadcasting Corporation have now commenced,” he said.

Mr Rudd said the document referred to by the ABC was considered by the Royal Commission into the Home Insulation Program in 2014.

“Having seen this document, and all other relevant cabinet papers, the royal commission concluded that there was no findings to be made against me,” he said.

Here’s my statement on the ABC report on the Home Insulation Program. Abbott's own Royal Commission on HIP made no findings against me. In fact it found that when I was PM, “there was no warning given of the very many problems with the program.” (p.271) https://t.co/Kux0I7AyZg pic.twitter.com/UP6fcGic5F

The department launched an urgent investigation on Wednesday, after it was revealed the trove of documents had been discovered in two locked filing cabinets offloaded to a second-hand furniture depot in Canberra.

The Department of Prime Minister and Cabinet (PM&C) launched an urgent investigation into how the massive breach occurred, within an hour of the ABC revealing the trove of documents.

But the ABC understands the Australian Federal Police (AFP) are yet to join the inquiry.

Terry Moran was the secretary of PM&C from 2008 to 2011, and argued the fallout from the incident which has made global headlines should be simple.

“Whoever was responsible for selling a couple of the filing cabinets, which I think were locked, which must have been heavy with all the papers in them, without checking what was in the filing cabinets, apart from anything else they ought to be found and sacked,” Mr Moran told the ABC’s 7:30 program.

He suggested the departmental investigation may not go far enough.

“I would probably bring the AFP in to do a major investigation,” Mr Moran said.

The former senior public servant claimed the breach could be seen as another reason to switch to a paperless system for ministerial documents.

Opposition Leader Bill Shorten has described the incident as “absurd”.

“I can’t believe it happened, I mean all these spies who are meant to be spying on us — they should just be going shopping in second hand furniture stores in Canberra,” Mr Shorten told ABC Comedy’s Tonightly program.

“You shouldn’t be able to find information out because someone didn’t check a set of filing cabinets, then they sold it at a second-hand government furniture sale.”

Media organisations argued the new legislation would make publishing and reporting on such documents illegal.

“From what I’ve seen, the documents in those filing cabinets were classified, secret classified documents,” Paul Murphy, from the Media, Entertainment and Arts Alliance told the ABC’s 7:30 program.

“Therefore under this bill they are defined as inherently harmful information.

The legislation is currently being considered by Parliament’s intelligence and security committee.

Labor victory fires up Tamil family’s hopes of return to their Biloela home
Analyst: Sharemarket will be anxious about a Labor pact with Greens
French foreign minister hails defeat of Morrison and his ‘notorious incompetence’
Tiger Woods quits PGA tournament after the worst round of his career
COVID claims 18 more lives as nationwide daily cases soar above 35,000
Volodymyr Zelensky: How war will end as Ukraine ‘breaks backbone’ of Russian army
Malcolm Turnbull promises a year of ‘rewards’ for Australians
Today's Stories