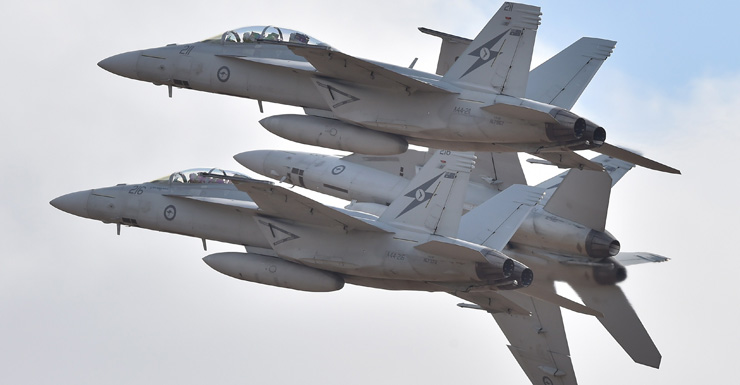 The pilots involved were not found to have acted contrary to the laws of armed conflict. Photo: AAP

An Australian F-18 fighter has caught fire while taking part in annual Red Flag exercises at an American military base in Nevada.

No one was seriously injured and all RAAF personnel are safe, he said in a statement. Defence is working with the US Air Force to investigate the incident.

A US Air Force statement said the aircraft, one of four Australian Growlers taking part in the exercises, was forced to abort its take-off on Saturday morning (local time) and then caught fire. The cause of the fire has not yet been determined.

A 340-member RAAF team has joined British units at Nellis Air Force Base for the three-week air combat training exercise, which also involves US Marines and Army units.

A RAAF statement issued before the mishap described the operation as “a comprehensive training environment for aircrew, maintenance and support personnel alike”.

“This includes a range of air power roles for RAAF personnel, from Air Superiority and Strike; and Intelligence, Surveillance and Reconnaissance to Electronic Warfare.”

The exercises typically involve a range of attack, fighter and bomber aircraft.

US Air Force Colonel Michael Mathes says this year’s Red Flag is the largest ever and would explore a variety of additional missions beyond those of earlier years.