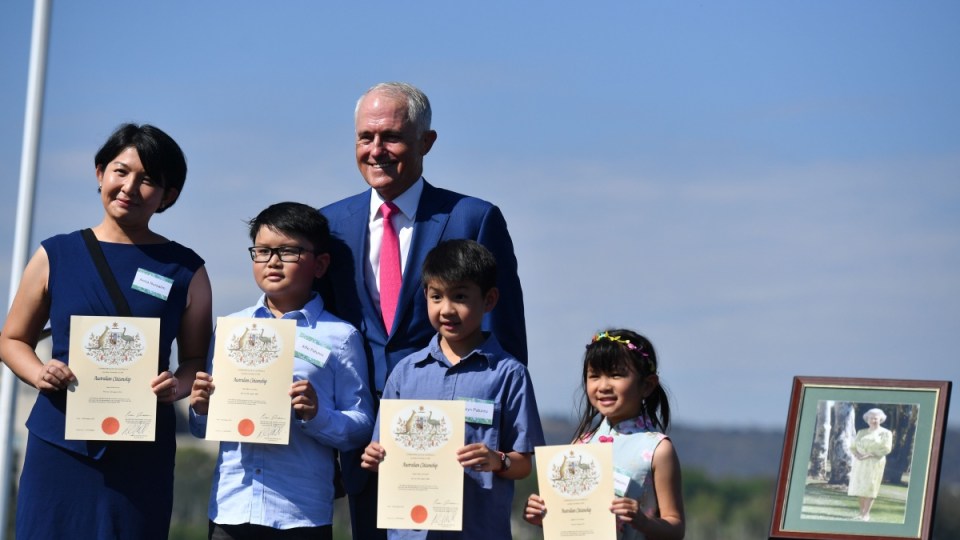 The proposed English-language test hasn't been introduced due to lack of support in the Senate. Photo: AAP

The number of people taking the pledge to become an Australian as part of citizenship ceremonies around the country was down by several thousand on Friday.

Robert Zee organises the annual citizenship ceremony at his Lions Club branch at Sunnybank in Brisbane and says normally more than 100 new citizens take part, but this year only 23 people became citizens after merging ceremonies with other clubs.

“I have no idea whether it is the government changing their policy of granting the citizenship or any other reasons,” he said.

“When we asked the Department of Immigration when we were having the information session, they couldn’t say.”

His local MP, Labor’s Graham Perrett, also noticed the decline in numbers, with only two ceremonies in his electorate of Morton this year.

“Normally it is a juggling nightmare because I’ve got up to five citizenship ceremonies to spread out throughout the day,” he said.

“But [there was] definitely a complete drop.”

He believes the Federal Government’s attempt earlier this year to bring in a separate, more stringent English-language test for citizenship is to blame.

“I know this has been the intent of the Turnbull Government to make it more difficult to become Australian,” he said.

“They have been throwing hurdles in front of people who want to become Australians, so I guess this is what happens.”

Government fails to get support for language test

Despite being proposed in April last year, the language test hasn’t been introduced because the Government can’t get enough support in the Senate to pass the necessary legislation.

The Federal Government’s plan generated a lot of controversy and Labor believes even the prospect of a language test may have deterred people from applying for citizenship.

However, in a statement a spokesman for the Minister for Citizenship Alan Tudge rejected that notion.

“It would be incorrect to make any assumptions about this year’s Australia Day citizenship numbers, especially given the proposed Citizenship Bill amendments are still before the Parliament,” he said.

“There is no backlog or delay arising from the announcement of the proposed amendments to strengthen the integrity of Australian citizenship.

“The number of people attending citizenship ceremonies is based on demand which fluctuates from time-to-time.”

Whatever the cause, Mr Perrett is concerned.

“[The] ceremony, where they affirm their loyalty to Australia, is a big part of making us a stronger society.

“So if these people are allowed to live in our community, but not become Australians… personally I don’t think that’s a good thing.”

Mr Zee was also disappointed by the decline in numbers.

“I became a citizen in 1990 … I came from Hong Kong and after that I call Australia home,” he said.

“[I’m] very, very happy and proud to be Australian.”