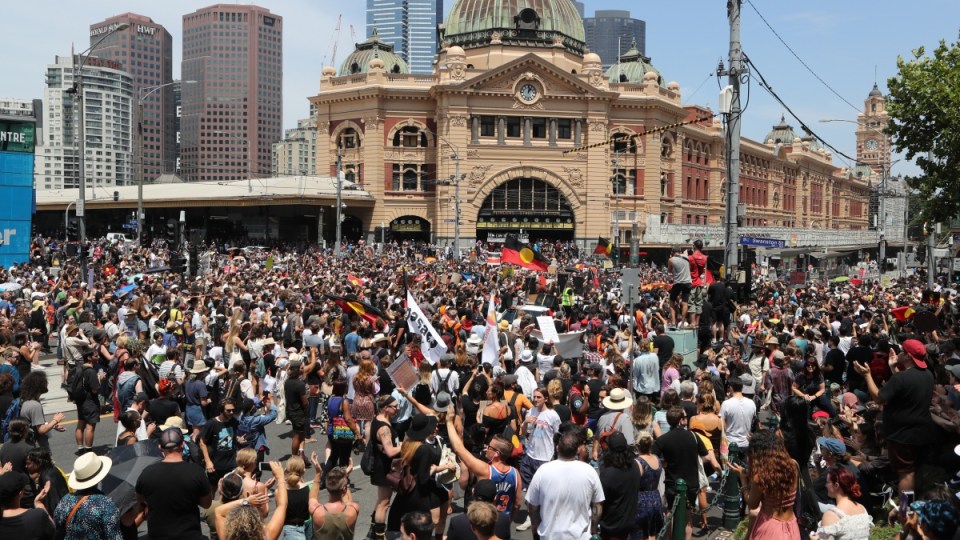 Protesters in front of Flinders Street Station in Melbourne as part of an 'Invasion Day' rally. Photo: AAP

Anti-Australia Day protests and rallies around the country have seen organisers cry out anti-national slurs as calls continue to change the date of the public holiday.

“F–k” Australia” and “I hope it burns to the ground”, Invasion Day rally organiser Tarneen Onus-Williams said to thousands who gathered to reject Australia Day outside Parliament House in Melbourne.

“I don’t want to feel good about change-the-date, I want justice,” another woman yelled across the crowd.

Tens of thousands of people across the country in Melbourne, Sydney, Adelaide, Canberra and Hobart have joined ‘Invasion Day’ marches, rebranding the national holiday ‘Survival Day’ and ‘Day of Mourning’ in recognition of a date celebrating the European colonisation of Australia.

Prime Minister Malcolm Turnbull said he accepted there were some people who staunchly opposed the date of Australia Day, but believed most people would be celebrating the occasion.

“You know, the overwhelming majority of Australians are celebrating Australia Day, like we all are here today,” Mr Turnbull said in Canberra on Friday.

“They are just in love with our nation, with our story, with our people, with our success – the most successful multicultural society in the world,” he said.

Chants at anti-Australia Day rallies told another story, with “shame” and “no pride in genocide” shouted outside state parliaments, while some indigenous representatives questioned if the country was too young to even hold a national day of celebration.

Elder Tony Birch told thousands of people in Spring Street, Melbourne, the nation was “not mature enough” to celebrate on any day, not just January 26.

“This country does not deserve a day of national celebration in any capacity,” he said.

At a gathering on the steps of Parliament House in Adelaide, Aboriginal elder Tauto Sansbury said changing the date of Australia Day was “inevitable” and would “break down barriers” for a greater conversation about indigenous rights.

“January 26 means nothing to us except that we’ve got to break it down and get rid of it,” Mr Sansbury told reporters.

“Then we can move onto all of the other things that are not right for Aboriginal people.

“It’s the wrong date and the wrong time to celebrate. Just like the Berlin Wall went down, I believe we’ll knock this down too.”

In addition to Indigenous elders and activists, and non-Indigenous supporters, The Greens participated in anti-Australia Day demonstrations across the nation.

Greens MP Lidia Thorpe, the first Aboriginal woman to be elected into the Victorian parliament, attended the Melbourne rally after receiving threats of death and gang rape in response to her calls to fly the flag at half-mast on Australia Day.

Ms Thorpe said Aboriginal people were sick of having to justify their existence in their own country.

“We want to be part of a nation that celebrates us, but not on the 26th of January,” Ms Thorpe said.

Federal Opposition leader Bill Shorten hit out at far-left and far-right Australia Day protestors, saying the day should not be an “idiot magnet”.

“Today’s a great day for all the new citizens, but it also is a day of great pain, in particular for all of our first Australians,” Mr Shorten said.