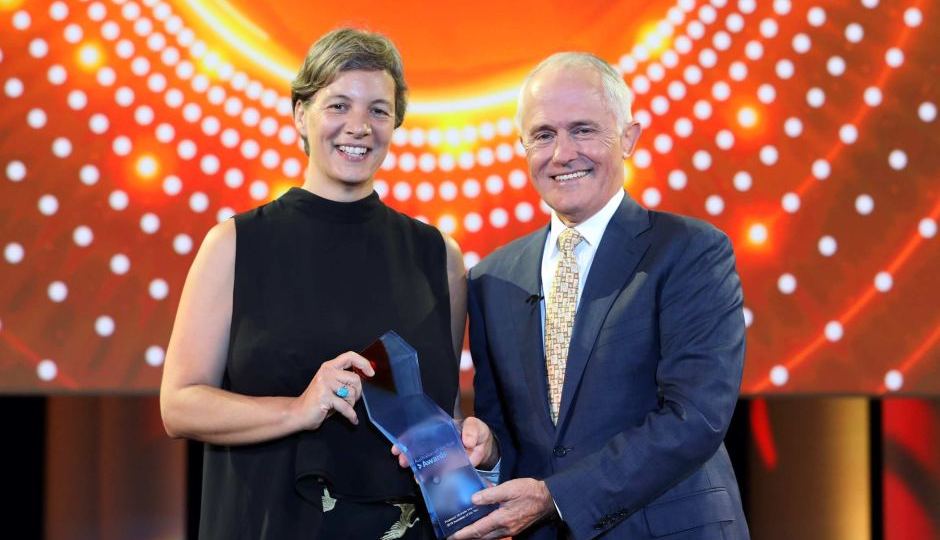 Quantum physicist Professor Michelle Yvonne Simmons, described by some as the Marie Curie of Australia and with an almost unparalleled record of achievement, has been named the 2018 Australian of the Year.

Professor Simmons leads a research team at the University of NSW, which in 2012 developed the world’s first transistor made from a single atom, as well as the world’s thinnest wire.

She dreams of creating a quantum computer capable of solving problems in minutes, which would otherwise take thousands of years.

Professor Simmons, who arrived in Australia from Britain in 1999, says she is driven by a desire to create technology useful to everybody.

“Wow, amazing moment,” she said in her acceptance speech.

“I came to Australia because I believed it would allow me to realise my dream.

“I pinch myself everyday. What we are doing is extraordinary.”

Likely to prove one of the most popular Australians of the Year since the awards began in 1960, she told an adoring audience her team were already manipulating individual atoms to create technology which had never existed before.

“We want to build not just a quantum computer but a quantum industry. We have proven time and time again that Australian researchers have unique advantages. We are down to earth. Our distaste for authority means we think for ourselves,” she said.

“We are fortunate to live in a country which not just accepts these mantras but celebrates them. Be proud of your country and who you are.

Prime Minister Malcolm Turnbull, who introduced each of the winners at an event in Canberra, said the contenders were a “shining example of our best selves. Their lives have made our lives better”.

Scientist Graham Farquhar was named Senior Australian of the Year for his work focusing on food security and climate change.

The Australian National University biophysicist won the 2017 Kyoto Prize – an equivalent to the Nobel Prize.

“Australia Day is the day we celebrate, amongst other things, the people who have grown old in this country. Let no one grow old alone,” he told the audience on Thursday night.

“We can be creative. We can struggle for honesty. We can deal with failures. We are all lucky because of our ability to embrace creativity.”

Samantha Kerr, arguably the best female soccer player in the world, was named the Young Australian of the Year.

By the time she was 15, she represented the Matildas. Known for her prolific goal scoring ability and trademark backflip, an emotional, almost tearful Ms Kerr said the award was an endorsement of women’s sport: “As a female athlete this makes me extremely proud to be an Australian.”

Eddie Woo, 32, is arguably Australia’s most famous mathematics teacher thanks largely to his quirky online videos on his channel Wootube, which attracts more than 100,000 subscribers.

Mr Woo, whose parents came to Australia from Malaysia in the 1970s, said in an impassioned speech: “I stand before you not as an individual, but as a proud representative of every teacher around the country.

“We know the power of giving a child the priceless gift of an education. I am no more a hero than anyone else. All I have done is open a window through to the hard work and dedication that happens in schools around the country. I call on every Australian to value education.”