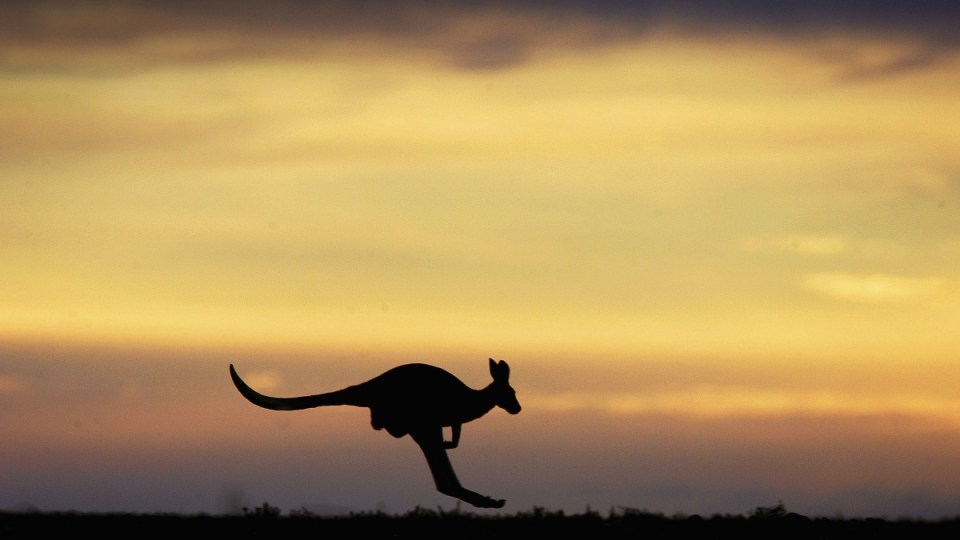 One area of Australia's outback is conspicuously lacking in kangaroos. Photo: Getty

Kangaroos are synonymous with the dry red plains of the outback.

Although the Kimberley is among Australia’s most iconic outback landscapes, the region is missing Australia’s iconic animal, the kangaroo – specifically the red kangaroo.

Graham Cobby, a geologist from Perth, noticed this phenomenon while working in the Pilbara and Kimberley.

He asked Curious Kimberley: Why are there so many kangaroos in the Pilbara but none in the Kimberley?

The Curious Kimberley questioner said he had heard a rumour that while farmers experimented with sheep agriculture in the 1950s, they released a virus to kill the red kangaroo population.

“While talking to some of the locals in the area, there are consistent comments about this rumour,” he said.

Farming may be a factor

There is no evidence of kangaroo pest control in the Kimberley.

Dr Eldridge said more intensive sheep and cattle farming in the 1940s and 1950s in the Pilbara could have encouraged kangaroo populations, possibly accounting for the difference between regions.

“Certainly on the east coast, farming practices have led to increases in kangaroo numbers in a lot of areas, and also into shifting distributions of kangaroos with additional watering points.”

While there is a global impression that kangaroos are found across the entire country, that is not the case.

Climate, terrain, pastoralism and the presence of dingoes are big factors affecting their population.

Dr Eldridge said the difference in kangaroo species across the Kimberley and Pilbara was likely due to subtle differences in habitat.

Are there really no kangaroos in the Kimberley?

If you live or visit the Kimberley, you will likely spot euros – also known as wallaroos – and wallabies.

But you will not see a red kangaroo and you definitely will not find a western grey.

Technically, it is almost impossible to 100 per cent rule out the presence of red kangaroos in the area because the Kimberley has historically been omitted from aerial surveys and studies.

“There is very little data on kangaroo numbers in the Kimberley at all,” Dr Eldridge said.

“It’s quite a hard area to get into and survey. Certainly, anecdotally, and if you go up there you don’t see nearly as many. There is no hard data that actually says there is a difference.”

She has red kangaroos in her yard, but they have been flown up from other areas around Australia.

“Our terrain isn’t any good for the red kangaroo,” she said.

Ms Watson said sometimes there were reported sightings of red kangaroos, but she believed they were likely big wallaroos.

“They’re just big euros [wallaroos] because they do get so big and muscular.”

Pilbara kangaroos may be on the decline

While red kangaroos have typically been abundant in the Pilbara, traditional owners say they have noticed a steep decline in numbers.

Kangaroo is a popular food source and has been hunted for centuries by Aboriginal people in the region.

“They are finding the population of kangaroo numbers is very limited at the moment,” he said.

Mr Hawkins said traditional owners attributed the decline in population to kangaroo harvesting in the region.

WA Greens Member for Mining and Pastoral Region Robin Chapple has raised the issue in Parliament.

However, Environment Minister Stephen Dawson said a 2016 aerial survey undertaken in the northern monitoring zone indicated numbers had increased over the past five years.

Mr Chapple said this was obfuscating the truth.

“Traditional owners know exactly what’s on country, who’s doing what there and when,” he said.

Harvest quotas will be assessed in 2018 in the lead-up to a new commercial harvest management plan that will be implemented from 2019.

Why there are no kangaroos in the Kimberley