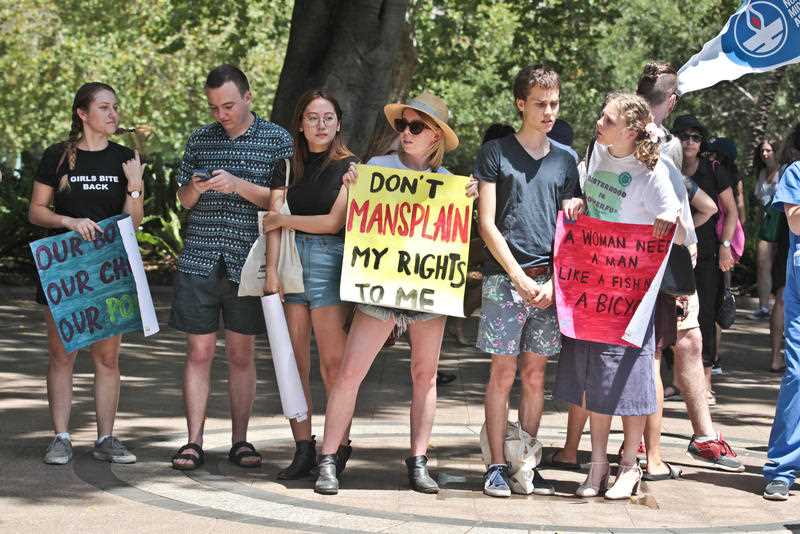 A Women's March demonstration in Sydney was held in solidarity with the Women's March movement taking place in Washington. Photo: AAP

People across the country have joined together to support women’s rights chanting “hey, hey, ho, ho – the patriarchy has to go”.

Women, men and children rallied in Sydney, Brisbane and Melbourne in solidarity with the “Women’s March” movement being held across the globe.

Thousands of Sydneysiders headed to the rally at Hyde Park sporting T-shirts saying “We can Do it” and waving placards with slogans of “unbroken” and “If you’re not angry you’re not paying attention”.

“Women bare most of the brunt of racism, discrimination and inequality and it’s time to fight back and do it in solidarity,” Greens NSW MP Mehreen Faruqi told AAP.

Senator Lee Rhiannon described the atmosphere of the Sydney march under warm blue skies as “delightful”.

“Women are very upbeat and very inspired especially by what’s going on at marches in New York and Texas,” she said.

Marches in Melbourne and Brisbane also attracted hundreds of supporters.

Supporters in Melbourne marched from Alexandra Gardens and formed a human chain across the banks of the Yarra.

“This is mainstream, this is everyone. It’s a new era of feminism.”

“A great day. So many people sending a message to Brisbane that change needs to happen!” Alicia Hahn wrote on social media.

The group sought to turn protests into political action by encouraging women to run for office and exercise their right to vote and influence elections.