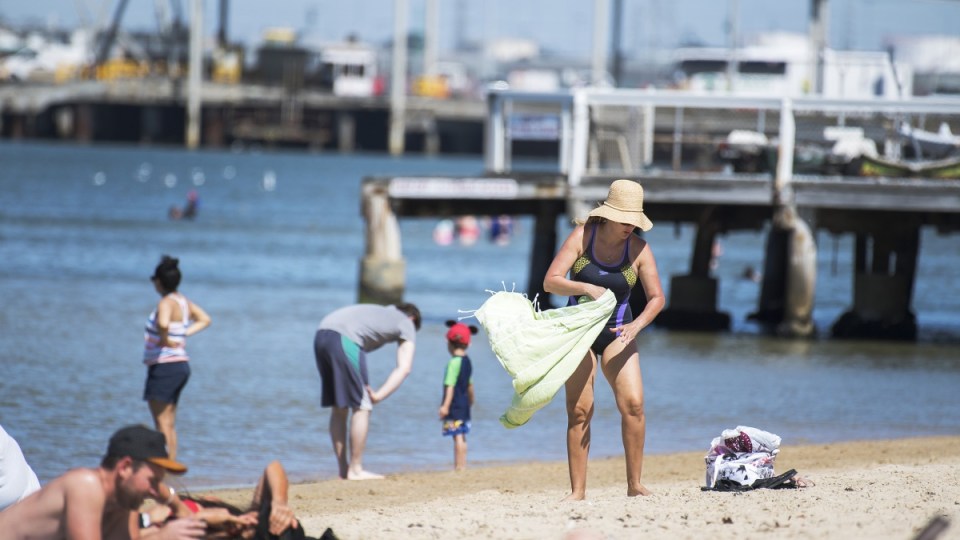 The cool change hit Victoria's surf coast about 10.30am on Friday. Photo: AAP

Some Victorians scored an early weekend bonus on Friday – a cool change – but South Australia and NSW are expected to still endure soaring temperatures for the next few days.

The mercury reached 43 degrees at Kent Town, in Adelaide’s east, just after 1pm on Friday afternoon, while the regional centre of Port Augusta reached 44 degrees and the small town of Roseworthy, north of Gawler, reached 45 degrees.

Bureau of Meteorology duty forecaster John Turnbull told The New Daily the cool change was expected to come through southern Victoria and some areas of Melbourne between 3pm and 4pm on Friday.

He said temperatures should start dropping between eight and 10 degrees starting from the western side of Port Phillip Bay and will move into the east part of the state by about 7pm.

Victoria’s Bellarine Peninsula has already felt relief, with the temperature dropping by eight degrees on the surf coast at Aireys Inlet at 10.33am and by 10 degrees in Geelong at 12pm, down from a high of 40.9 degrees.

#Coolchange at the top end of the bay, should reach Docklands shorly and CBD around 2pm. #Melbweather Unfortunately the change is really struggling to push inland, not yet at Hamilton in the southwest. https://t.co/qIrENyEqKW pic.twitter.com/Rr1KTBl8M4

“In Victoria, although its going to go through Melbourne, the northern suburbs won’t feel it as early or as significantly,” Mr Turnbull said.

In regional Victoria, temperatures are expected to remain unchanged, hovering around 38 to 41.9 degrees, over the weekend. Regional towns of Traralgon, Bendigo, Swan Hill, Shepparton, Wangaratta and Wodonga will miss out on the cool change on Friday afternoon. 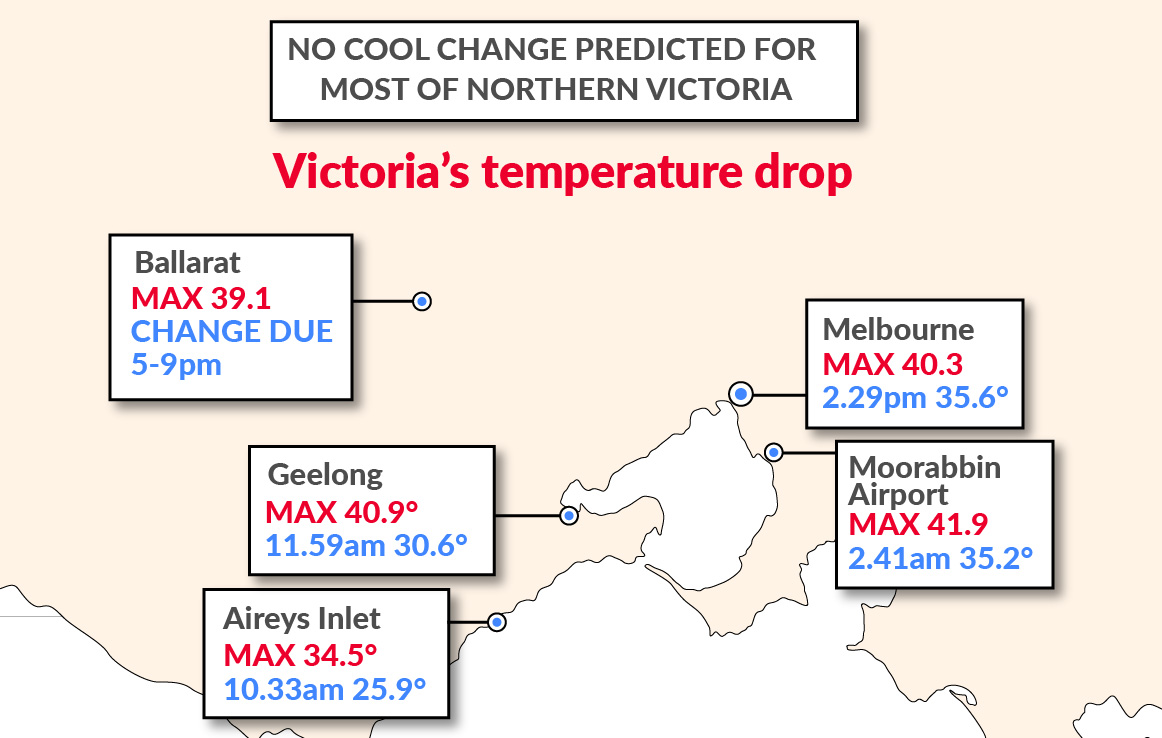 Adelaide continues to swelter through a 40-degree plus day with some regional centres tipped to reach even higher temperatures as the state braces for the third day of extreme heat.

The Bureau of Meteorology is predicting a high of 41 degrees for Adelaide on Friday after the mercury hit almost 42 degrees on Thursday and 39 degrees on Wednesday.

“There are many stages of lack of reserve notices,” he told reporters on Friday morning.

The forecast has forced the cancellation of the Bupa Challenge cycling event, involving thousands of recreational cyclists riding the same course as the Tour Down Under professionals.

But police said many ignoring warnings and were riding it without support.

“Given the extreme heat, I would urge all riders to make sensible choices today don’t put yourself or others at risk,” Assistant Commissioner Scott Duval said.

Some relief should reach the city by Saturday with the maximum temperature forecasted to be a more tolerable 35 degrees.

Meanwhile, Tasmania’s senior forecaster Rachel McInerney says the north of the state was bracing for temperatures around 38 degrees.

“We’re looking at fairly widespread areas of low to mid-30s right across the central north, northern midlands, north-east and east coast,” she said.

“It’s unusual we get maybe one or two days of summer where we start to push into the mid high 30s so it’s not what we’re used to.”

In contrast, a cold front crossing the south has seen the temperature in Hobart fall from 31 degrees at 9am to just 21 degrees by lunchtime.