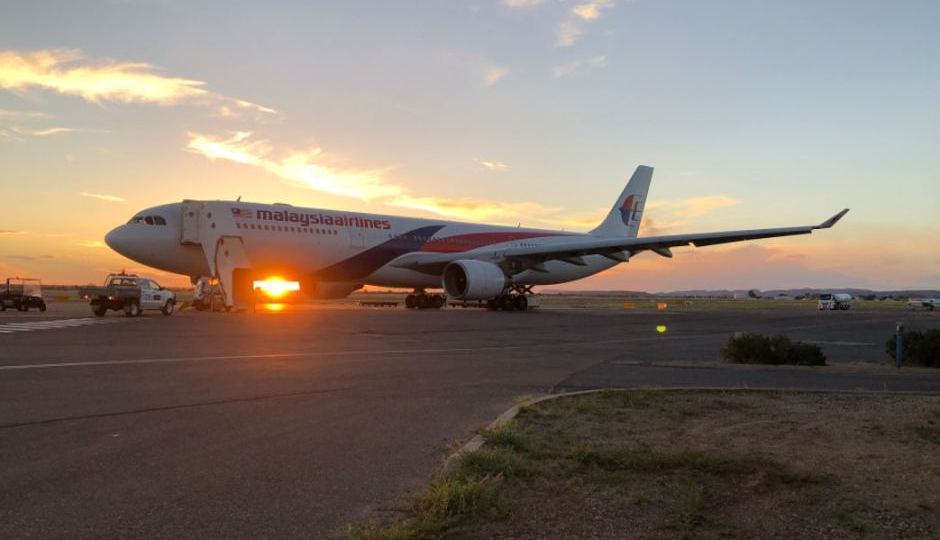 The flight was diverted to Alice Springs due to technical issues. Photo: ABC

The husband of a passenger onboard a Malaysia Airlines flight forced to divert to Alice Springs says his wife has described the experience as “hell”.

Flight MH122 travelling from Sydney to Kuala Lumpur with 224 passengers onboard was over the Western Australian coast near Broome on Thursday afternoon when it experienced some technical difficulties.

As a result the pilots shut down one of the Airbus A330-300’s engines and made the call to divert the plane to Alice Springs.

“She said she was on the loo when she started hearing loud banging noises from the right-hand side of the plane and that’s when all it started,” Mr Kanani said.

“It was like hell this flight and they were told to be ready for an emergency landing.”

Another passenger onboard the aircraft, Mohamad Nogheib, 17, recalls the moment he knew something was wrong.

“We were on the brink of Australia we were about to cross into the sea and the plane suddenly turns around,” Mr Nogheib said.

“I was scared for my life, I’m not going to lie.

“The pilot landed on one engine only one of them was completely broken.”

Another passenger told the ABC there was “very violent shaking” during the flight and those onboard were braced for a rough landing.

Passengers await a flight to take them out

Malaysia Airlines said the flight was diverted due to technical reasons and that safety is its priority at all times.

The airline said the aircraft departed Sydney about 1:00pm Thursday.

Passengers have been told they will have to stay overnight in Alice Springs.

Hotels are being arranged for passengers while replacement flights are organised by Malaysia Airlines.

“We are just waiting now.”