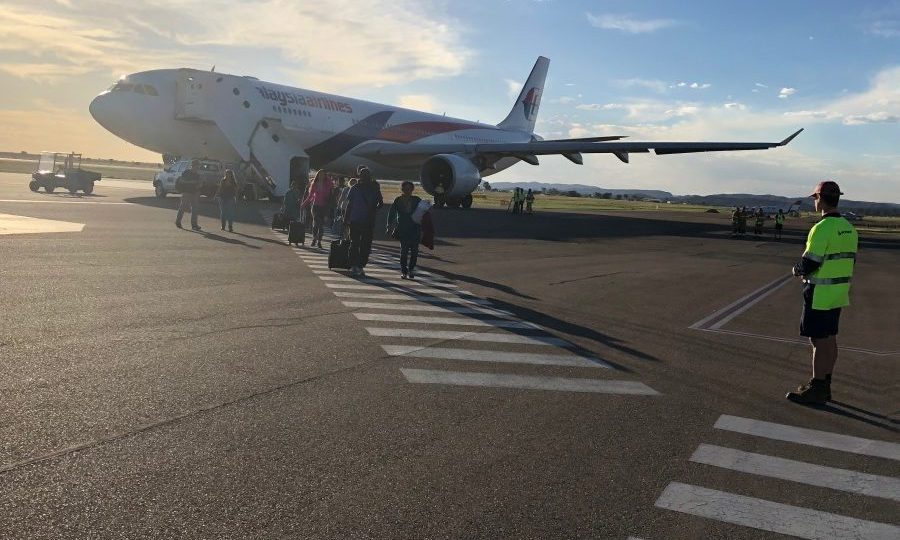 Malaysia Airlines flight MH122 from Sydney to Kuala Lumpur made an emergency landing in Alice Springs.

Passengers have told The New Daily they were instructed to “brace for impact” on Malaysia Airlines flight MH122 from Sydney to Kuala Lumpur during an emergency landing in Alice Springs after an in-flight engine shutdown.

Malaysia Airlines said the pilot diverted the plane over the north west coastal town of Broome, WA, on Thursday afternoon to conduct further safety checks after a “technical fault” in one of its engines.

The Australian Transport and Safety Bureau said it would be investigating the in-flight engine shutdown and diversion of the twin-engine Airbus A330, which limped back to Alice Springs and landed safety.

Passenger Madhu Alasyam told The New Daily he was sitting behind the right wing when the plane started to experience turbulence.

He said the pilot instructed passengers to “brace for impact” and were warned the plane may need to make an emergency landing.

“About 15 minutes later, the pilot said ‘things are under control’ and that the plane was going to land normally,” Mr Alasyam said.

The Sydney man said nobody panicked on the plane, but if another 15 minutes had gone by, he would have “definitely panicked”.

“I’m eager to get home. It reinforces you’re opinion that they [Malaysia Airlines] are not that great,” Mr Alaysam said

Mr Pandey told The New Daily he and his two friends had plans to participate in the Mumbai Marathon, but had decided to return home to Sydney.

He said one of his friends was scared to fly after the incident and they collectively decided to cancel their trip, given they wouldn’t have enough time to recover from the jetlag.

“I’m waiting for an explanation of what happened yesterday,” Mr Pandey said.

Passenger Hugh Wolton told the ABC, “We suddenly experienced a very violent shaking of the aircraft and that probably lasted about five minutes and it was coming from one of the engines.

“We got a call from the captain on the deck describing how to make plans for an emergency landing – you know, the wording used things like ‘impact,’ so we were suddenly bracing ourselves for a rough landing.”

Another passenger, Peter Brooks, said the pilot announced to expect “a couple of impacts” and some passengers believed the plane would come down in the desert.

About 45 minutes later the captain said they would land in Alice Springs, he said.

The 224 passengers on board spent the night in accommodation in Alice Springs and were due to leave for Kuala Lumpur at 5.45pm on Friday.

In a letter to passengers, Malaysia Airlines said it “deeply regrets the anxiety and inconvenience” experienced as a result of the diversion.

The airline said the flight’s commanding captain decided to divert the flight for technical assistance and assured “safety was not at any time compromised”.

Malaysia Airlines, it said, “is also working very hard to reallocate passengers with onward connections on to the next available flights to their destination.”

The incident is the latest to hit Malaysia Airlines. On March 8, 2014, its flight MH370 from Kuala Lumpur to Beijing disappeared without trace with 239 people on board. A search for the aircraft will resume soon in the Indian Ocean.

On July 17, 2014 MH17, a passenger flight from Amsterdam to Kuala Lumpur, was shot down over the eastern Ukraine, killing all 283 passengers and 15 crew on board.