Malcolm Turnbull spent more time overseas than in Victoria, South Australia and Tasmania combined in the second half of 2017, according to an analysis of his official appearances over the period.

Analysis by The New Daily suggests Mr Turnbull’s travel diary had a heavy focus on Western Australia at the expense of South Australia and Tasmania between July and December last year.

Mr Turnbull spent 10 days in WA, making four trips to the state in the second half of the year.

That included a five-day July visit to Perth, Albany and Broome before he headed north for the Garma Festival in the Northern Territory.

The WA blitz in the second half of the year came after Labor’s thumping victory in the state election in March. 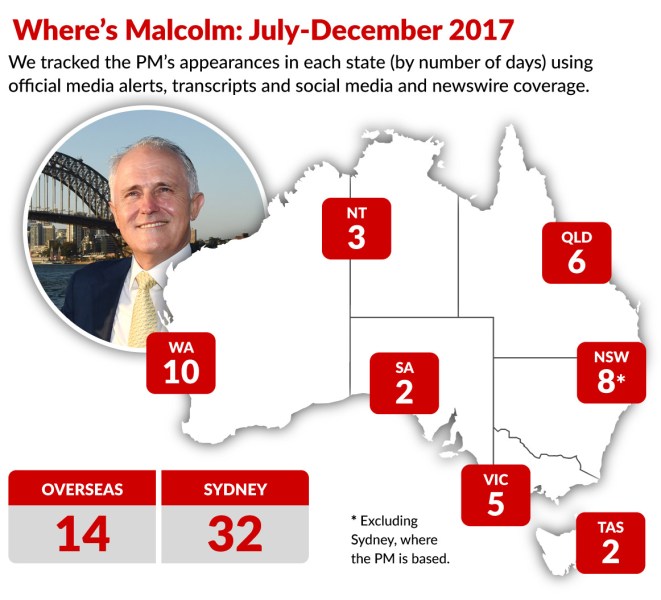 With Tasmania now in the midst of a state election campaign, the Prime Minister visited on Tuesday to unveil new City Deals for Hobart and Launceston. He has not appeared in South Australia since August.

By comparison, Mr Turnbull spent nine days in Asia and the Middle East over that period, travelling to Israel and Sri Lanka in early November and to Vietnam, the Philippines and Hong Kong later for APEC.

Mr Turnbull also made a five-day trip to Europe (the UK, Germany and France) for the G20 summit in July.

He visited Japan for a meeting with the country’s Prime Minister Shinzo Abe on Thursday.

The Turnbull government has had particularly testy relations with the Daniel Andrews’ Victorian Labor administration while South Australian Labor Premier Jay Weatherill and the PM have also bitterly clashed over energy policy.

Mr Merlino told The New Daily: “Given it appears that the PM spends more time overseas than he does in Victoria, it’s little wonder he continues to overlook and short-change Victorians.

“The Prime Minister for Sydney may be a nickname, but like any good nickname, it rings true.”

Unsurprisingly, Mr Turnbull, as the Member for Wentworth in Sydney, spent plenty of time in the nation’s biggest city, making public appearances on 32 days over the period.

Mr Turnbull made appearances in regional New South Wales on eight days between July and December.

That included going to the Snowy Mountains (Tumut and Cooma) to spruik the Snowy 2.0 project, as well as visiting Ettamogah, near Albury, with Farrer MP Sussan Ley, as well as Tamworth to support Deputy PM Barnaby Joyce’s in New England.

Despite the crucial Queensland state election in November, Mr Turnbull spent only six days in the Sunshine State over three visits.

Veteran Liberal Party strategist Grahame Morris, who has worked with six Coalition leaders, said the Prime Minister’s office would be working to a three-year program.

“They make sure that over three years, not three months or six months, they have visited each state an appropriate number of times,” Mr Morris, a former chief of staff told John Howard, told The New Daily.

He predicted the PM would focus his travel on parts of Queensland and western Sydney throughout 2018.

“As one gets towards the last few months of a term, there is always a greater focus on batches of marginal seats around the country,” he said.

“For the Coalition to be returned, they will need to do well in those areas.”

Where Malcolm Turnbull spent most of his time in 2017