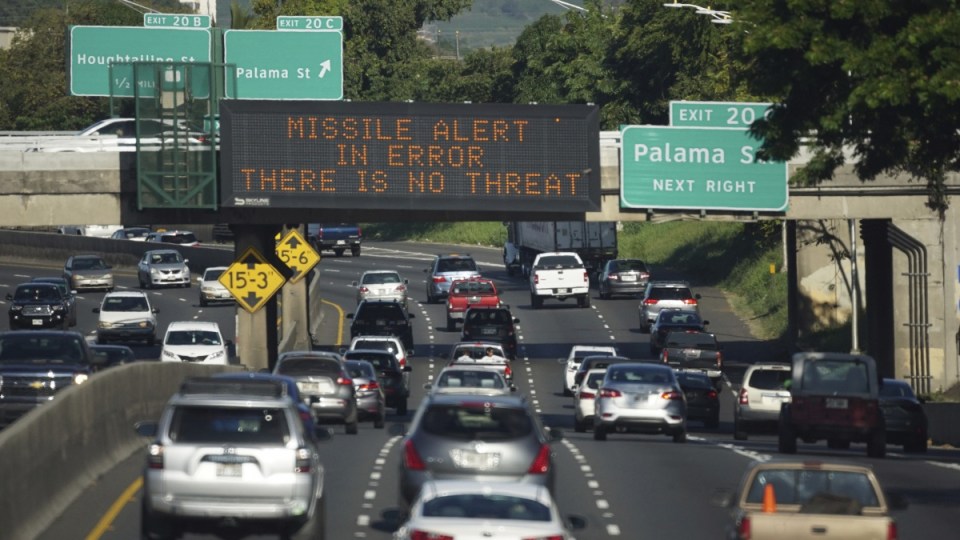 Hawaiians had to wait 38 minutes before they were told the missile alert was false. Photo: AAP

Defence analyst Malcolm Davis told The New Daily that although Australia had an emergency alert system for natural disasters, there was a “functional gap when it comes to high-level military threats”.

That “missing link” in the chain of communications could hamper the ability of authorities to quickly warn the nation of an incoming missile attack, he said.

Under the constitution, states and territories are responsible for the protection of life and property, including emergency management.

Dr Davis, Senior Analyst in Defence Strategy and Capability at the Australian Strategic Policy Institute, said the Australian Headquarters Joint Operations Command at Bungendore would receive “communication from the Americans that the missile was on its way” in the case of an attack.

There was already a system of reporting and communications between  Bungendore and the Australian Government Crisis Coordination Centre, he said.

“But the final link in the chain from that centre, from the federal government to the states, is missing,” he said.

“The technology is there. We have the emergency alert system for bushfires and floods. It’s just the political management of the task that has to be sorted out between the federal and the state level.

“It’s not just a case of the Prime Minister calling up the premier of New South Wales or Victoria. It’s a case of who is responsible for what tasks, under what timeline.”

Any confusion could be costly given there would be only “30 minutes from the point of a launch of an ICBM from North Korea to the point when it detonates over its target somewhere in Australia”.

Amid the spectre of possible nuclear war on the Korean Peninsula, Dr Davis said Australia’s political leaders should urgently be working on a clear policy response.

He predicted it would be “a hot topic of discussion between the federal government and the state (and territory) governments” this year.

Asked whether Australia was equipped to warn the nation of an incoming missile, a Home Affairs Department spokeswoman told The New Daily: “Australia has a national emergency alert system which is used to warn and advise the community of emergencies by sending voice messages to landlines and SMS to mobiles.

“The system is administered by Victoria on behalf of all jurisdictions.

“The content and release of emergency alerts is authorised by each jurisdiction.”

What would happen in Australia

Australia does not have a missile defence system and would rely on the US for prior warning, according to Richard Tanter, a Senior Research Associate at the Nautilus Institute.

“Early-warning satellites which are downlinked though Pine Gap would inform the US of heat bloom of the launch itself,” said Professor Tanter, who has published a series of papers on the secretive military base.

“That would give the US precise data about the location of the launch by tracking the first few seconds of its trajectory, they’d be able to track its likely direction and target point.”

The warning would go to the US Missile Early Warning Network in Colorado Springs and “we would get virtually simultaneous warnings”, Dr Davis argued.

Both experts noted that there were Australians working at Pine Gap, but Professor Tanter suggested the “full process of reporting, computing and calculating” would take place in the United States.

That meant the information “would have to go from Pine Gap, to Washington, then back here again”.

“That can happen quickly; it all works on optical fibre,” said Professor Tanter, who downplayed any missile threat to Australia.

“But the real point is Australia doesn’t face a (nuclear missile) threat like that.”