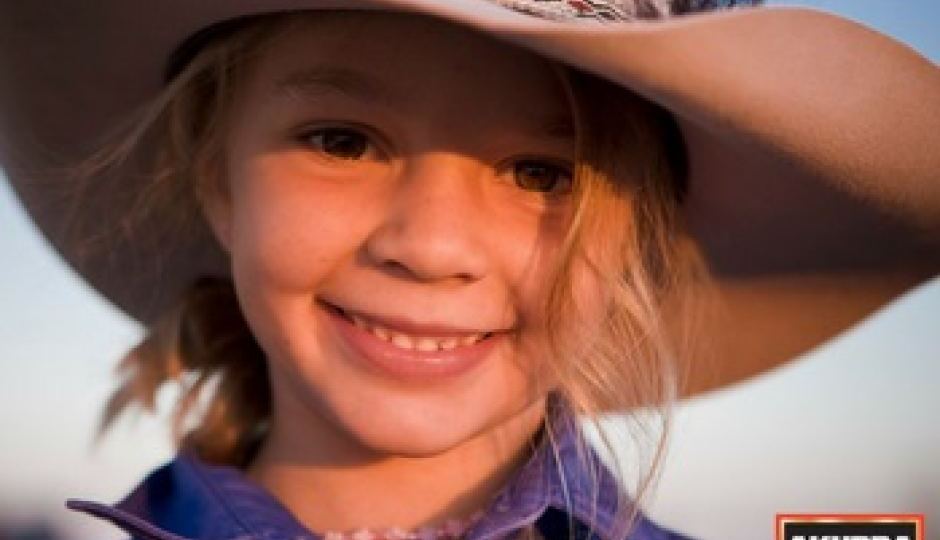 Dolly Everett was the face of an Akubra campaign eight years ago. Photo: Facebook/Akubra

The suicide of teenage “outback girl” Amy ‘Dolly’ Everett has struck a chord with strangers around the country, with people from truckies to Prime Minister Malcolm Turnbull saying much more work is needed to prevent cyberbullying.

The 14-year-old from a well-known Northern Territory cattle family took her own life last week after being targeted by bullies online, her grieving parents Tick and Kate Everett said.

An image of Dolly as a child, smiling in an Akubra hat when she was the face of the iconic Australian brand, has been shared around the world in a social media campaign sparked by her parents to raise awareness.

Her death has sparked outrage and sadness, particularly in rural and regional communities around Australia.

Family friend Derek Birse posted a video tribute to Dolly on social media, lamenting the effect of technology on children.

“This social media and these bloody phones, I near reckon 99 per cent of parents wouldn’t know what their kids are dealing with these days,” he said.

“Sort of rips your guts out when you get this sort of news, this bullying is that out of control now.

“She was the same age as my little baby boy.”

He said since Dolly’s death he had looked through both his two young boys’ phones to see if they were being bullied.

“If they are going through something on them phones, for God’s sake, get the bastard and smash it with a hammer.”

Prime Minister Malcom Turnbull issued a statement on Facebook saying his heart was breaking for Dolly and her family.

“Dolly’s passing highlights the devastating impact that bullying can have on its victims,” he said.

“Every step must be taken to reduce the incidence of bullying, whether offline or on, and eliminate it wherever we can.”

“Cyber bullies can harass and intimidate their victims from any location and at any time of the day,” he said.

“Much more work is needed, from governments, health groups and the internet companies themselves, to prevent cyberbullying, stop it when it occurs and to minimise its impact when it does occur.”

Mr Turnbull said young people who were experiencing bullying online could lodge a complaint on the Federal Government’s esafety.gov.au website.

‘You don’t just affect the person you are bullying, you affect so many other people’

Another video tribute was posted by truck driver Tex Mazoudier, who said he grew up in the small town of Cunnamulla in south-west Queensland and started to be bullied when he moved to a bigger city to go to school.

“I didn’t understand why,” he said.

“I got picked on for not having Ripcurl bag or a Billabong bag, it was one of them old hessian bags that I absolutely loved.

“Bullies, they always think they know more, they are more.

“But really it’s because they’re less.”

Mr Mazoudier said he was inspired to share his story after hearing Dolly’s.

Craig Eastell, who works as a calf scruffer on a property in the Northern Territory, posted a heartfelt video about an attempt at taking his own life.

“Anyone that’s got depression, anxiety, stress, it’s not the end of the world, even though a few years ago I thought it was,” he said.

“There’s always someone that will listen to you.”

He said Dolly’s death was a tragedy.

“It’s ridiculous, that someone has to get that far down from people bullying that they think it’s the only way out.

“You don’t just affect the person you’re bullying, you affect so many other people.”

Dolly died just weeks before she was due to return to boarding school at Scots PGC College in Warwick, southern Queensland.

Before her death the teenager finished a drawing with the words “speak even if your voice shakes”.

Scots PGC College said it took its responsibility for the wellbeing of students extremely seriously, and said an investigation was underway.

“Dolly will be truly missed and our thoughts and support remain with her family and friends,” he said.

“We are continuing to work directly with Dolly’s family to provide support, whilst also respecting their privacy during this extremely difficult time.

“In consultation with Dolly’s family, we intend to hold a special commemorative service early in Term 1 to provide our community with an opportunity to support the Everett family and in honour of Dolly’s life.”

Mr Thompson said the welfare and privacy of the entire school community remained its priority during this difficult time.

“The college has a number of support services in place, including a team of dedicated counsellors, for any community member who may wish to discuss or seek support,” he said.

Isolated Children’s Parents Association spokeswoman Tammie Irons said bullying could be an issue when sending children away for schooling.

“When you’re away from your family it can be really hard — when you don’t have somebody you feel you can trust and you can talk to,” she said.

Ms Irons has a 14 year-old daughter Hallie, who is also a boarder.

“Because she is the same age as me, I felt really scared,” Hallie said.

“She had so many things that she could do with everyone else around her and her family. It’s really sad.”

Dolly Everett’s funeral will be held on Friday in Katherine.