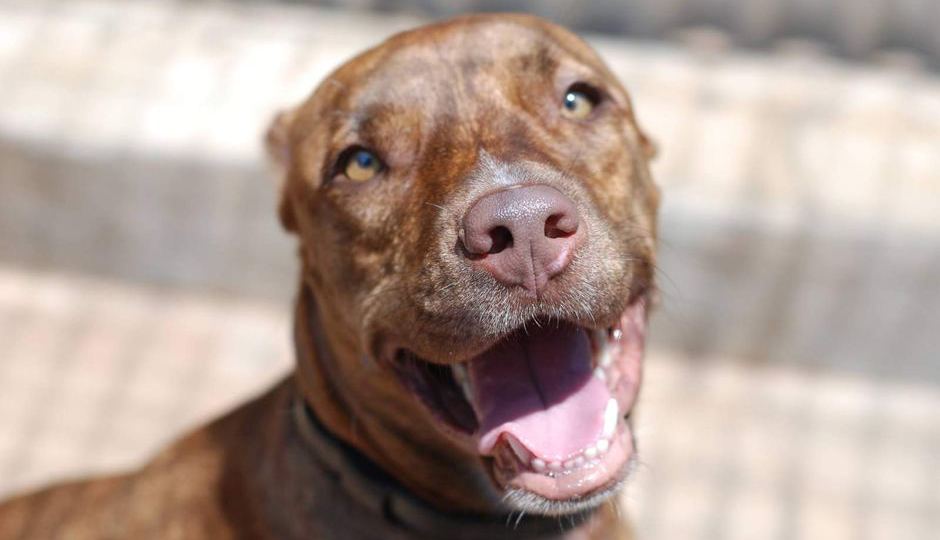 People who dislike Darwin’s oppressive wet season should spare a thought for Snazzy, the “cross-breed Darwin special” that the Top End summer sends into a tailspin.

She acts as a kind of weather forecaster for the RSPCA shelter that kennels her, behaving erratically up to an hour before storms roll over the outer-Darwin site.

“Unfortunately, she’s so storm-phobic that she cuts her feet open trying to escape her kennel and makes them bleed,” RSPCA Darwin’s Jess Moore-Jones said.

At other times, staff found distress had driven Snazzy to scrape the pads off her paws.

With the delayed monsoon season due to arrive in coming days, shelter staff have decided the dog just isn’t suited to the Top End.

The RSPCA is transferring Snazzy to Melbourne in the hope she might find a new home and fewer thunderstorms.

“We figured the nicest thing we could do to improve her quality of life was just to get her somewhere else,” Miss Moore-Jones told ABC Radio.

“So there’s a critical period in puppies from the third week to the 14th week where we should expose them to as many things as possible, including different noises, because our world is very, very crazy,” she said.

Dogs who aren’t familiar with storms – from claps of thunder and lightning to the atmospheric changes that Snazzy acutely detects in the lead-up – can find it an anxiety-inducing event.

The experience is similar to a fireworks display and dogs respond in similar ways, be it by heavy panting and restlessness, destroying furniture or running away.

But Ms Reuss, who helps dog owners teach their pets to cope with storm season stress, said the solutions could be just as varied.

“There’s lots of things we can do to help our dogs, it’s just that there’s no quick fix.”

Recalling the adage that it’s never too late to teach an old dog new tricks, Ms Ruess said training pets might eventually “re-wire their brain” so negative associations were rewritten as positive ones.

She used the example of encouraging people afraid of snakes to encounter them at a distance and rewarding them for repeated exposure.

For dogs, this example might translate to pairing a frightening experience with a positive one.

“We should pair the storm with a positive experience like play, feeding time, or even that we’re hanging around and we’re really calm and relaxed ourselves,” she said.

Another tactic is to rearrange the environment where pets experience stressful events the moment they begin to show signs of distress.

“That could be that we have a room in the house where we make it nice, maybe by playing some calming music, and having the fans and air conditioners going,” Ms Ruess said.

Cooing to a terrified dog in a soothing voice may not necessarily help, and may even be detrimental if the dog comes to rely on it and its owners are, one day, nowhere to be found.

Above all, the key to managing dogs with phobias like Snazzy is training and management.

“Unfortunately it’s not being done in lots of animals so the instinct of fear will stick with them,” Ms Ruess said.

What to do with a dog terrified of thunderstorms