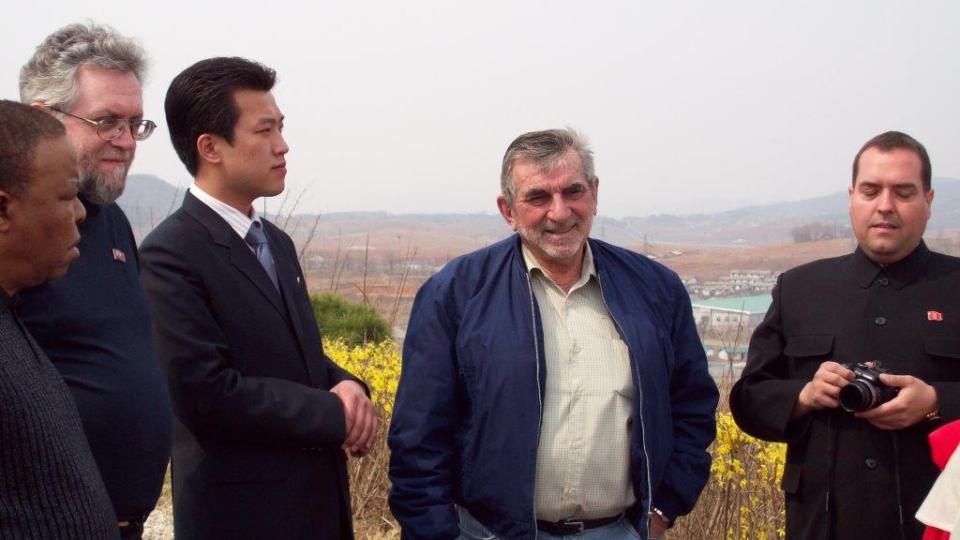 For most people, any mention of North Korea is likely to conjure up images of nuclear weapons, a brutal dictatorship and appalling human rights conditions. But as far as Brisbane retiree Raymond Ferguson is concerned, the secretive country officially known as the Democratic People’s Republic of Korea is simply misunderstood.

Drawn to the country by its socialist tenets and ideology of self-reliance known as “juche”, he is on a lonely mission to spruce up the image of the isolated state in Australia and bring the two countries closer together.

“I can assure you that Australians who I know that have been to North Korea have come back with an entirely different attitude and are more enlightened,” Mr Ferguson, head of the Australia-DPRK Friendship & Cultural Society, tells The New Daily.

Just 12 per cent of Australians trust North Korea to act as a responsible member of the international community, according to a Lowy Institute poll carried out last year, with 65 per cent viewing its nuclear program as a “critical threat”.

In his new year’s address, North Korean leader Kim Jong-un declared that the entire United States was within range of its intercontinental ballistic missiles, warning that the “nuclear missile button is right there on my desk”.

Malcolm Turnbull recently described Pyongyang as a “criminal operation” in remarks condemning its nuclear weapons development and involvement in cybercrime and other illicit activities.

But despite Kim Jong-un’s repeated nuclear and missile tests, the Australia-DPRK Friendship & Cultural Society holds the media and politicians responsible for the country’s negative image in Australia — and blames the United States for the escalating tensions in the region.

“The last thing they want is war,” says Mr Ferguson, whose organisation is mostly made up of white Australians but also includes a number of ethnic Koreans. “No other country suffered so much as a result of the Korean War than the Korean people.”

Mr Ferguson does not accept first-hand reports from North Korean defectors of widespread human rights abuses inside the country. He lauds the regime’s healthcare and education systems and the apparent lack of reported crime.

“I’ve been there 14 times, and I’ve never seen a group of people, a population, that seem to be so relaxed and confident about the way they go about their life.”

In 2014, a UN Commission of Inquiry, led by former Australian High Court judge Michael Kirby, found that a network of notorious prison camps inside North Korea were the site of human rights abuses “without any parallel in the contemporary world”, including murder, torture, enslavement, rape and forced abortions.

Active since the 1970s, the Australia-DPRK Friendship & Cultural Society is not unique in trying to bridge the gap between Australia and North Korea, neither of which has a diplomatic presence in the other’s country.

The Korea Compatriots Association in Australia (KCAA), based in Sydney, bills itself as an organisation dedicated to promoting solidarity among Korean people and the reunification of the Korean Peninsula, which was divided into North and South by the United States and the Soviet Union after WWII.

KCAA head Park Yong-ha, an ethnic Korean who immigrated to Australia in the earlier 1990s, is a regular guest of Pyongyang, having attended numerous birthday celebrations for late dictator Kim Jong-il, the current leader’s father, and Kim’s funeral in 2011, according to North Korean state media. The KCAA declined an invitation by The New Daily to explain its rationale for taking part in various events inside North Korea or its stance on the regime.

“Both associations bring people to North Korea partly to develop people-to-people diplomacy, links, to improve the general public image of North Korea among people here who are sympathetic about North Korea, and also to give North Koreans a sense of legitimacy,” Mr Petrov says.

“They try to be apolitical as much as possible but of course by being engaged in these propaganda tool trips, and also advertising trips to North Korea, they are looked upon as agents of the North Korean regime and the money which they bring and pay for the hotels and accommodation and meals goes straight to the North Korean government.”

The Australians who back the North Korean regime