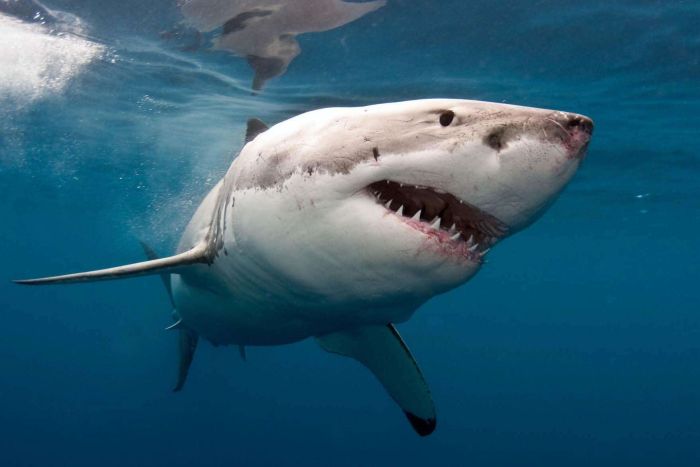 Sharks capture our imagination like almost no other animal. In cinemas they stalk their hyperventilating human prey with callous indifference, sometimes onto land. Via tornadoes*.

To protect us from their perceived threat we net our beaches, killing dolphins, whales, and turtles in the process.

But the numbers don’t add up. Fourteen people have been killed by sharks in Australia since 2012 — a yearly average of 2.3. That’s including the anomaly of five deaths in 2014.

If our fears were proportionate to the actual threat faced, we’d be watching horror films about cholesterol and stress.

So for anyone looking for a little reassurance before heading to the beach this summer, here are five unexpected things more likely to kill you than the men in grey suits.

The sight of a ladder may not invoke paralysing fear, but they are one of the more lethal things we cohabit with.

According to the Australian Bureau of Statistics (ABS), 272 Australians died in ladder falls in the 10 years to 2016 — an average of 27 people per year.

And a sharp increase in ladder-related injuries has been blamed on the rise in popularity of DIY television shows.

Per-year hospitalisations rose by more than 1500 for ladder-related injuries between 2002 and 2012, according to a study in the Australian and New Zealand Journal of Public Health last year.

Just 20 per cent of those were injuries at work.

According to research in the Medical Journal of Australia, deaths from ladder falls are predominantly skewed toward the elderly, and occur from heights as low as a metre off the ground.

He suffered a fractured skull, “significant” injuries to his chest and was placed in an induced coma.

The ABS records show that more people die from “contact with venomous snakes and lizards” in Australia each year than sharks.

It’s pretty safe to assume that the 28 deaths in the ABS records in this category between 2006 and 2016 were all from snakes, and that the eastern brown snake was the primary culprit.

A study of 23 fatal snake bites between 2005 and 2015 positively identified the eastern brown snake in 17 cases, with another two unable to be identified.

Although its fangs are relatively small, eastern brown snake venom is capable of killing an adult in under half an hour, Dr Bryan Fry told ABC Science last year.

“It’s arguably the quickest killing venom in the world. No other snake in the world has killed people so quickly, so regularly,” Dr Fry said.

A 2017 University of Melbourne study found almost half of all snake bites occur in urban areas.

A series of studies published in Nature in 2005/06 identified venom in Australian lizards such as the goanna, and also in bearded dragons.

But speaking at the time to ABC Science, lead researcher Dr Fry said that venom in Australian lizards shouldn’t be cause for concern.

“Just because they’re carrying small amounts of rattlesnake toxins doesn’t mean they’re going to be dangerous to humans,” he said.

“If you were a five or 10 gram mouse it would be different, but the venom from a monitor lizard is not going to kill a human being.”

Not only are hornets, wasps and bees more deadly than sharks, but collectively they kill as many people as snakes and were responsible for more than 12,000 hospitalisations between 2001 and 2013.

According to Dr Welton’s study, 25 deaths were caused by bees alone during that time.

Insects are one of the most common sources of anaphylaxis, emergency physician Professor Simon Brown told ABC Health and Wellbeing.

Anaphylaxis is a severe form of allergic reaction in which the sufferer experiences a sudden drop in blood pressure and difficulty breathing.

“You start getting hot, flushed, itchy. You might have a little bit of difficulty breathing, palpitations, heart racing fast and in the worst case, you might just go unconscious,” Dr Brown said.

Although 11,000 people were hospitalised with spider bites between 2001 and 2013, there hasn’t been a fatal spider bite recorded since 1980.

*There is a film franchise in which sharks are carried in tornadoes. Its title is a portmanteau of shark and tornado.