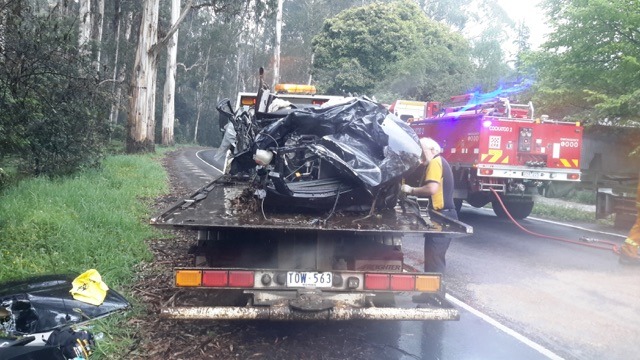 The wreck of a car driven by a P-plater in Victoria who fell asleep behind the wheel in 2015. Photo: AAP/Victoria Police

Dr Mark King, a senior research fellow at the Queensland University of Technology’s Centre of Accident Research and Road Safety (CARRS-Q), was responding to a federal politician’s warnings about the risks of international drivers on Australian roads.

Ms Henderson’s seat of Corangamite in Victoria takes in part of the Great Ocean Road, a popular scenic route for visitors, which she said had become a hotspot for accidents caused by foreign visitors.

“At least 20 per cent of all crashes on the Great Ocean Road are now involving or being caused by international drivers,” she said, citing VicRoads figures.

But CARRS-Q’s Dr King said research did not conclusively show foreign drivers to be a greater threat on our roads than other licence holders.

CARRS-Q research on accidents between 1996 and 1999 showed that international licence holders represented 0.7 per cent of the total number of drivers involved in fatal crashes.

In accidents involving the “more common causes” such as speed and drink-driving, foreign drivers tended to have lower rates of incidence, Dr King said.

But they were more likely to be in accidents where disorientation or fatigue were factors, suggesting that when foreign drivers became tired, they may lose focus and forget to keep to the left.

Under current rules, international visitors can use their home licences for an unlimited time when driving in Australia (provided they are in English) and are only required to convert their licences once they become residents.

The federal MP, Ms Henderson, said the current rules were not “good enough”. She argued tourists should have to prove their driving skills before being able to hire a car and that governments should adopt a tougher approach to international driver’s licences.

“It is a real danger that these international tourists are coming across from other parts of the world, getting into a hire car … and they really are a moving time bomb,” she said.

“I just don’t think it’s good enough that there’s no verification of someone’s driving experience when they arrive in Australia.”

“On a weekly basis, we are hearing of incidents involving international drivers on the wrong side of the road, stopping in the middle of the road taking photographs of koalas … [and] running through stop signs.”

Stephen Lee, who runs a driving school in Mossman in far north Queensland, started a Change.org petition in 2016 calling for tourists visiting Australia for less than three months to display a ‘T plate’, similar to L or P plates.

T plates would identify tourists on the road and ideally make other drivers more patient and tolerant towards them, Mr Lee said.

“Up here we have a lot of foreign drivers and clearly they don’t understand the road rules and so a plate would be warning other people that they aren’t familiar with our rules.”

“We have a lot of [foreign] students and backpackers here for longer than three months driving around on their overseas licences.”

However, Dr King at CARRS-Q said special plates had “no real” benefit and could lead to “targeting or discrimination” of those drivers.

Testing of foreign drivers before or on arrival to Australia was also “logistically very difficult” and could provide a disincentive or discouragement for the tourism industry, Dr King said.