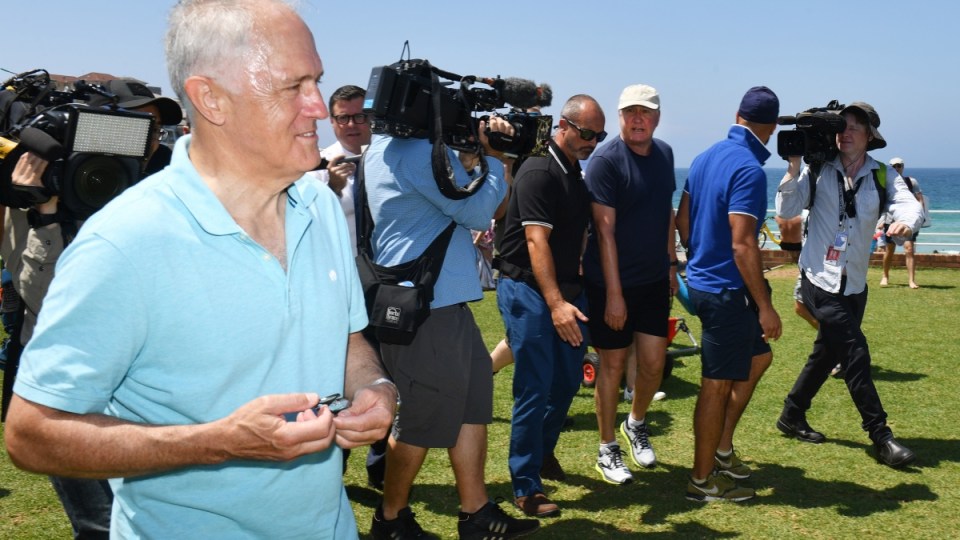 The Republican question has been thrust back on the agenda by a tiff between Keating and Turnbull. Photo: AAP

In response to criticism of his republican credentials, Prime Minister Malcolm Turnbull has hinted at a postal survey or plebiscite on an Australian republic.

In Monday’s edition of The Australian, former prime minister Paul Keating attacked Mr Turnbull – appointed by a Labor government to lead the failed ‘yes’ campaign for a republic in 1999 – by insinuating his support for the cause was “another chameleon act”.

In a press conference later that day, Mr Turnbull hit back at Mr Keating’s “barely coherent” criticisms, saying there was no point “pretending there is an appetite” to abolish the constitutional monarchy.

The only way to effect change would be to build national consensus through a national vote, Mr Turnbull said.

“You’ve got to have that discussion and you know it may be that a plebiscite – maybe even a postal survey given the success of the marriage postal survey – could be one way to deal with that,” he said.

“But that issue needs to be debated and resolved, and then of course, the fundamental question — then you’ve got to put up an amendment to the constitution which proposes a president to replace the Queen as head of state, and then it’s up to the Australian people to decide.

“This is not a change that Parliament can make. And Australians have shown themselves to be very conservative when it comes to constitutional change.”

The Australian Republic Movement (ARM) welcomed the comments, calling on Mr Turnbull to commit to a national vote during the next Parliament.

“We are thrilled with the return of the PM – long the most passionate republican in the country – to moving forward the process of becoming a republic,” ARM chair Peter FitzSimons said in a statement.

“The leaders on both sides of politics clearly want this to happen. Now it’s not a question of if, but how.”

The Labor opposition has promised a vote on a republic by the end of its first parliamentary term, if elected.

The republican question was thrust back onto the national agenda this week by the release of cabinet papers from the Keating government in 1994.

One document, released on Monday by the National Archives, showed internal polling put support for direct election of an Australian president at around 91 per cent.

Public backing for the government’s favoured model – appointment or removal of the president by a two-thirds majority of a joint sitting of both houses of Parliament – had support as low as 3 per cent and 16 per cent at its highest.

That model was endorsed by the Republic Convention in February 1998 and went to a national referendum in November 1999. It was defeated 54.87 per cent to 45.13 per cent.

Defeat was attributed to divisions within the republican camp, between those who favoured direct election and those supporting the minimal change model. Most of Labor, and some on the coalition side, favoured the change, but then-prime minister John Howard did not.

With a Labor government in power and supportive of the move to an Australian head of state, the ARM was founded in July 1991, with novelist Thomas Keneally as chairman and Mr Turnbull as a founding member. Mr Turnbull became chairman in 1993.

He said there was no chance the public would accept a republic without having a say on who would be president.

“At the end of the day that’s a killer,” he told AAP. “I just felt we did not have a show of getting the republic through without the directly-elected model.”

“It was Paul’s ultimate big-picture position, designed to produce an outcome which if he won the subsequent election, would be almost the signature effort of the new government,” he said.

Mr Beazley said direct election and the codification of head of state powers was the only way a republic could be achieved post-2018.

“I don’t think it has a snowball’s chance in hell without that.”

In his interview with The Australian, Mr Keating stood by his preferred model of a head of state elected by Parliament, warning that a popularly elected president would be “a complete disaster” and challenge the power of the prime minister.