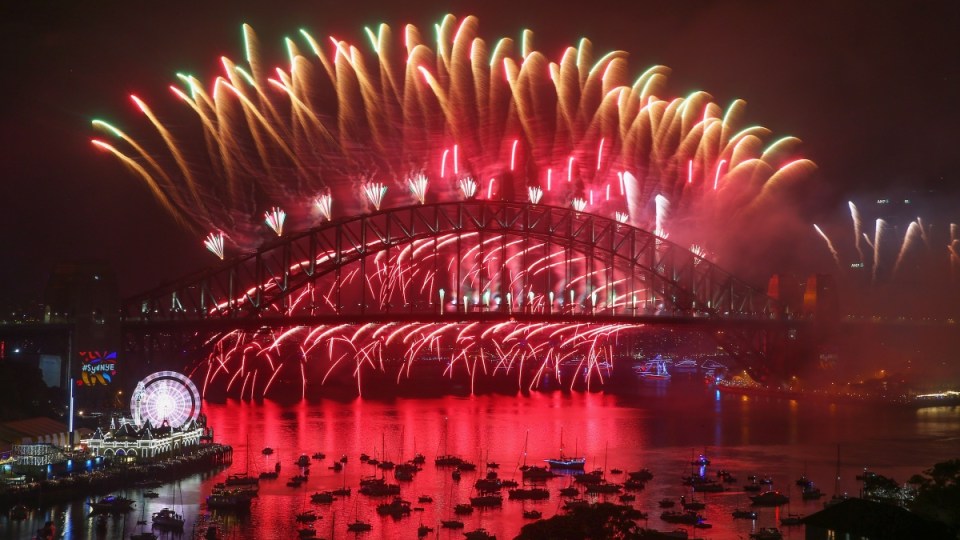 Sydney and Melbourne have greeted the new year with some of the first – and biggest – fireworks displays, as calendars begin to turn to 2018 across the world.

There were only a few hiccups across the nation. The ABC’s official live broadcast was uncharacteristically popular, apart from a minor gaffe at the very end, while a pyrotechnic malfunction at Terrigal Beach in New South Wales saw a barge explode, injuring two.

Apart from those unfortunate events, the country’s two largest cities put on dazzling displays without hitches.

Fireworks lit up the sky above Sydney Harbour in a massive display that included a rainbow waterfall cascade of lights and colour flowing off the harbour’s bridge to celebrate the legalising of same-sex marriage.

With an estimated worldwide audience of 1 billion people the Sydney fireworks spectacular wowed the crowds around the harbour which was jammed to capacity by midnight on Sunday.

About 1.6 million people attended the fireworks around the edge of Sydney Harbour where a rainbow waterfall off the Sydney Harbour Bridge celebrated the legalising of same-sex marriage.

Sydney’s Lord Mayor Clover Moore said the spectacular display would reinforce the city’s position as the New Year’s Eve capital of the world.

“The most technologically advanced fireworks display I’m told,” he said.

“It’ll promote Sydney to the world. There’ll be a billion viewers out there watching.”

Melbourne of course disputed this claim. It launched 14 tonnes of fireworks from the top of 22 high-rise buildings in the CBD.

Between 300,000 and 500,000 people converged on the city for the night, with several bridges across the Yarra River packed with thousands of spectators.

Pyrotechnician Rusty Johnston said the show was bigger than Sydney.

“We’ve got a higher tonnage because we have so many firing sites where Sydney is a smallish area,” he said.

Despite the heightened security presence, which included the deployment of more than 2,000 police officers, at least 500,000 people brought in the new year in Victoria’s capital.

In the two biggest cities alone, more than 2 million people gathered for festivities.

Thousands were forced to evacuate the beach when a barge where fireworks were being launched caught fire at about 9pm. The blaze injured two men operating the display, though not seriously. The display went out of control, launching fireworks into the air all at once.

Footage on social media shows people screaming and commenting that it “didn’t look like part of the show”.

Police say the two technicians were taken via ambulance to a nearby hospital for treatment. The incident will be investigated by Safe Work NSW.

Somewhat unusually for the ABC, at least in recent years, the official live broadcast of new year’s eve was relatively blunder free and well received. The broadcaster almost managed to get through the entire show without any of its usual hosting issues.

At the very last seconds of the countdown, co-host Charlie Pickering accidentally said this was the only time it was legal to “kill” a police officer. He meant “kiss” – and later apologised on Twitter.

Thanks to everyone for watching #NYEABC tonight. Apologies for the slip of the tongue at the end. And a big shout out to all of the police keeping us safe tonight.

Aside from that, the live performances from Australian music legends like Jimmy Barnes, John Paul Young, Marcia Hines and Goanna guitarist Shane Howard went over well. The countdown focused almost entirely on musical acts, with a heavy dose of nostalgia.

The broadcasts of previous years have been plagued by bad reviews.

Meanwhile, at arguably the world’s most iconic countdown in New York City, celebrants have been warned to brace for one of the coldest ball drops in Times Square ever.

City and state health officials have advised people to cover all exposed skin, and wear a hat, scarf and gloves. Drinking alcohol has been discouraged because it causes the body to lose heat faster.

The coldest New Year’s Eve in Times Square came in 1917, when it was -17 degrees Celsius at midnight.

In other parts of the US gripped by the cold, some events are being cancelled or reconsidered.

Australia welcomes in 2018 in dazzling style – with minor hiccups