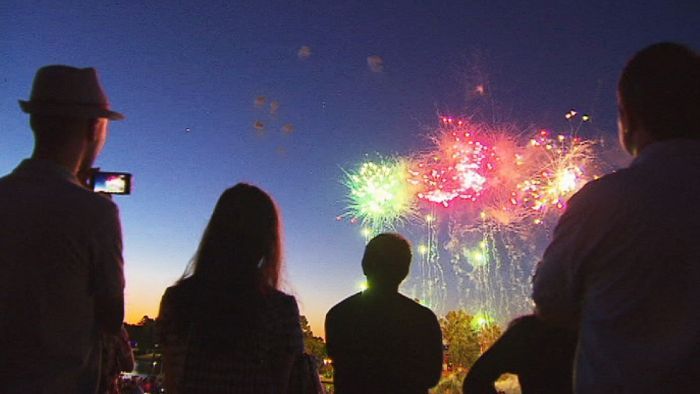 Millions of Australians will turn out to welcome 2018 amid stepped-up security measures. AAP

Australia is bringing in 2018 with a feast of pyrotechnics – and a stepped-up police presence.

Melbourne is putting is putting its biggest show of the year tonight in the CBD, with 14 tonnes of fireworks launched from the top of 22 city buildings for New Year’s Eve festivities.

Between 300,000 and 500,000 people converges on the city for the night, although people were being urged to avoid the CBD if they had a view of the city skyline.

Tourism and Transport Forum chief executive Margy Osmond said around 1.6 million people were expected in Sydney Harbour, with a special 20-second firework set designed by Hugh Jackman the feature of the festivities.

This year’s fireworks also was to celebrate the same-sex marriage vote and the 40th anniversary of the Gay and Lesbian Mardi Gras with a rainbow cascade off the Harbour Bridge.

In Brisbane the light show was endangered from storm cells forecast to hit the south-east part of Queensland.

About $65,000 worth of pyrotechnics were to be fired from a barge in the first of two shows in Hobart, but the main event will blast off some 12-inch shells — the largest available in Australia.

A jam-packed Elder Park was again be the centrepiece of New Year’s Eve celebrations in Adelaide.

The party atmosphere was enhanced by a Big Bash double-header at Adelaide Oval, where the Adelaide Strikers were taking on the Brisbane Heat in the WBBL before the men’s clash later in the evening.

Perth had no large-scale fireworks displays planned, as the city traditionally saves its pyrotechnics extravaganza for Australia Day.

In Canberra, thousands of people were gathering at Garema Place and Civic Square in Canberra’s city centre.

More than 30,000 fireworks were to be launched from City Hill as Art Vs Science rings in the New Year.

Security to be beefed up with more police, barriers

Police in all major centres were out in force following recent incidents in Melbourne after the Flinders Street car attack and the November arrest of a man who allegedly planned to shoot at New Year’s Eve crowds.

Extra concrete bollards were in place in Melbourne’s city centre and at Docklands and both areas will be closed to traffic.

Across Victoria 2000 extra police officers were deployed, including 1000 plain-clothes and uniformed officers in Melbourne.

NSW police say there were no specific threat to Sydney’s celebrations, but they used buses and garbage trucks as safety barriers and have rostered on more than 2000 police across the state.

In Queensland hundreds of additional uniformed and undercover officers monitored crowds, focusing on celebrations in Brisbane, Cairns and the Gold Coast.

Party nation: Australia brings in 2018 with a bang