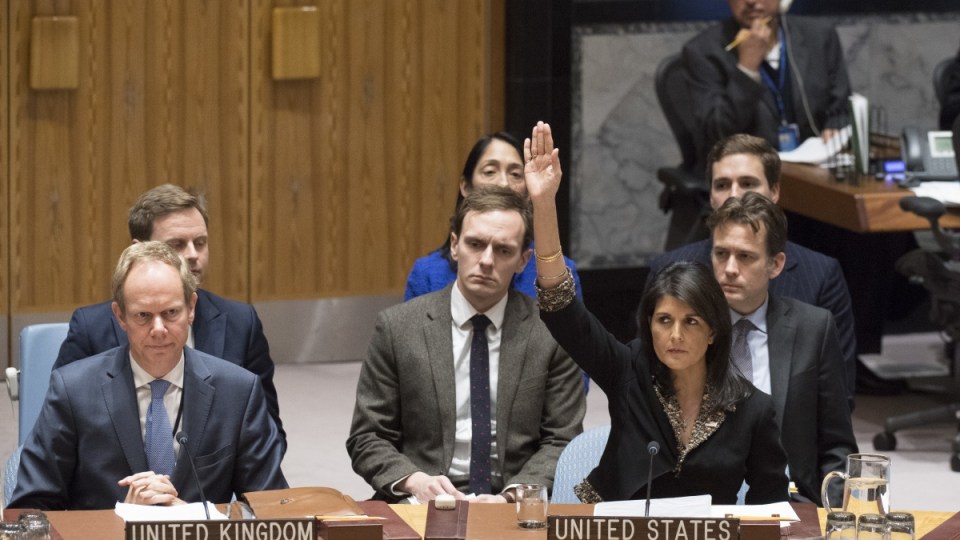 US ambassador to the United Nations Nikki Haley responded to the claims during a podcast interview. Photo: AAP

Australia has abstained from a UN vote overwhelmingly condemning Washington’s decision to recognise Jerusalem, as the Trump administration warns it will punish countries that supported the resolution.

A total of 128 countries backed the UN resolution on Friday morning (AEDT) rejecting US President Donald Trump’s decision to recognise Jerusalem as the Israeli capital.

Nine nations voted against the resolution, while 35 countries, including Australia, abstained.

Despite Mr Trump earlier threatening to cut off financial aid to countries that voted in favour of the resolution, Washington found itself isolated on the world stage as many of its Western and Arab allies voted for the measure.

Ahead of the vote, the US said it was “singled out for attack” at the UN over Jerusalem, which holds Muslim, Jewish and Christian holy sites.

“The United States will remember this day in which it was singled out for attack in the General Assembly for the very act of exercising our right as a sovereign nation,” US Ambassador to the UN, Nikki Haley, told the 193-member General Assembly.

The vote, which was non-binding, was called at a emergency meeting of the UN General Assembly after the US had vetoed a vote on a similar resolution at the Security Council.

Earlier in the week, the US responded furiously as 14 of the 15 Security Council members backed Egypt’s resolution, including permanent members China, France, Russia, the UK, as well as Japan.

The US vetoed the legally binding resolution – which said that all countries complied with existing UN consensus that the future of Jerusalem was decided through negotiations between Israel and the Palestinians.

Speaking on Thursday (AEDT), Foreign Minister Julie Bishop suggested the resolution did not “conflict” with Australia’s position but said the government was still “assessing the impact” of the proposal.

“However, we look at all of these proposed resolutions in the context of whether they will materially contribute to a lasting and negotiated peace. So we’ll make our assessment in that light,” she said.

The Turnbull government has reiterated its support for Australia’s embassy to remain at Tel Aviv.

Ms Bishop said each country would weigh up the resolution against its goal of adding “materially to lasting and peaceful negotiations”.

Last month, Australia abstained from a UN vote that stated that any actions taken by Israel “to impose its laws, jurisdiction and administration on the Holy City of Jerusalem are illegal”.

Before the vote, Ms Haley wrote to UN members warning that “the President and the US take this vote personally”.

“The president will be watching this vote carefully and has requested I report back on those who voted against us,” she wrote.

The Department of Foreign Affairs and Trade did not respond to a question on whether Australia had received the letter.

A spokeswoman told The New Daily: “While aspects of the proposed resolution accord with Australia’s policy regarding a two-state solution and the political status of Jerusalem, we will assess it in the overall context of whether it will materially advance peace negotiations.”