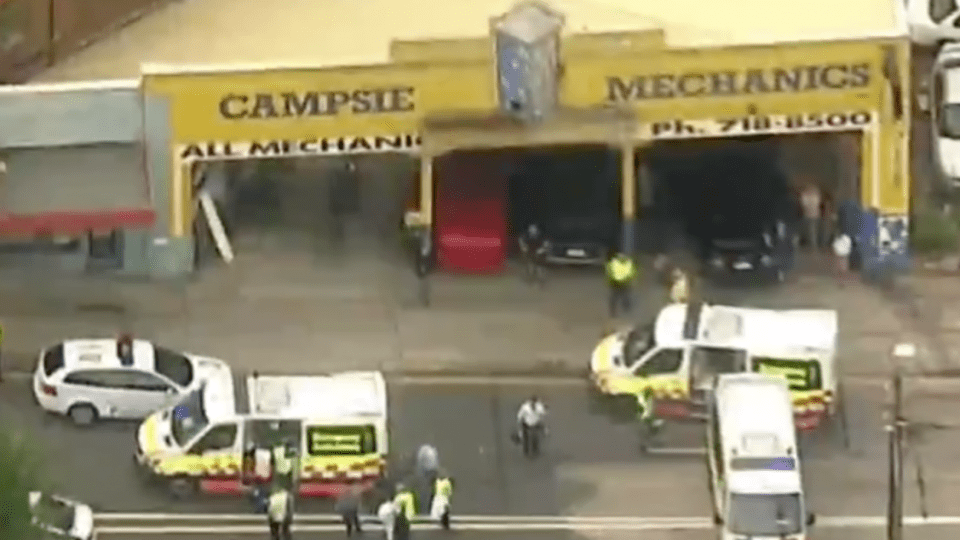 The female driver was described as "hysterical" after the accident. Photo: Twitter/7 News

A two-year-old girl has died and another is in a serious condition after separate accidents involving reversing cars.

NSW Police said a two-year-old girl was struck by a reversing vehicle at a mechanics workshop on a street in Campsie in Sydney’s inner south-west about 10.45am on Thursday.

The girl was taken to Sydney Children’s Hospital at Randwick, where she died.

The 43-year-old woman driving the car was described by police as “hysterical” and was later treated for shock in hospital.

“The driver was absolutely hysterical, as you would imagine,” Spt White told reporters in Sydney.

“This is a horrific scene for not only the driver but all those involved, particularly for the police and emergency services.”

“The death of a child is always very, very traumatic,” Supt Whyte said.

“For the emergency services, it’s one of those jobs that nobody ever wants to go to.”

Support services have been offered to the officers who were first on the scene.

Supt Whyte pleaded with motorists to approach the busy holiday season with caution.

“It is a timely reminder to all drivers, particularly when you’re reversing, to be aware of your surroundings,” he said.

A report will be prepared for the Coroner.

Meanwhile, a toddler remains in hospital in a serious condition after being hit by a reversing car in a Melbourne driveway.

The one-year-old girl was struck when a woman was reversing at Avondale Heights about 8pm on Wednesday.

Circumstances of the incident are not yet clear and the investigation is ongoing, police said on Thursday.

“Unfortunately a lady has been reversing outside her driveway and it appears a young child has run behind the vehicle and has been struck and knocked to the ground,” Sergeant Cannon told the broadcaster.

It was believed the girl ran behind the car as it was reversing.

One toddler dead, another seriously injured in separate reversing accidents