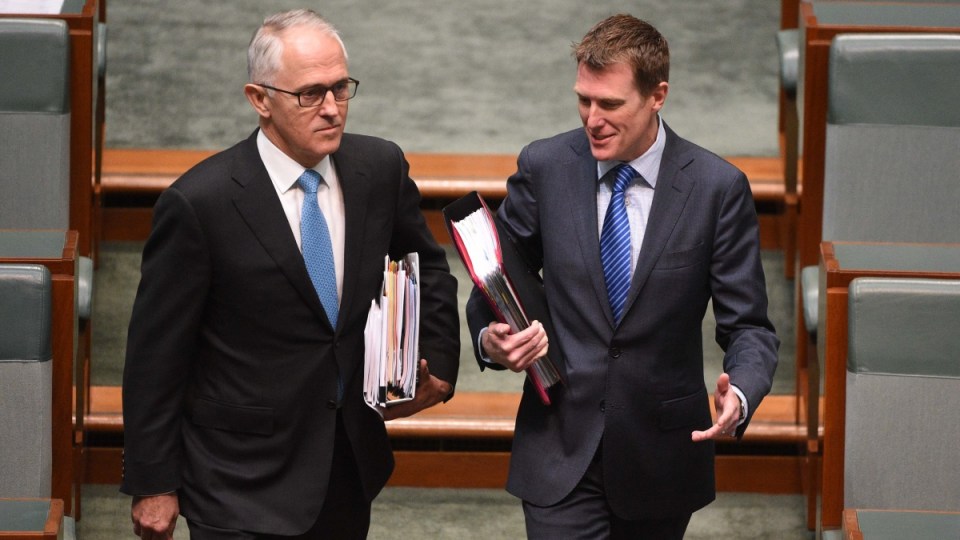 Malcolm Turnbull has announced a dramatic reshaping of his ministerial team but is blaming “geography” for a brewing backlash over the dumping of a popular Nationals minister.

Mr Turnbull on Tuesday confirmed the creation of two new portfolios and brought five new faces into Cabinet, including a surprise promotion for two Queensland politicians.

But the formation of the PM’s new team has already sparked internal ructions within the Nationals, with well-regarded Victorian National, Darren Chester, losing his place in Cabinet and the Infrastructure and Transport portfolio.

In a surprise move, first-term Nationals backbencher David Littleproud has been elevated into Cabinet as Agriculture Minister, while Liberal MP John McVeigh, also from Queensland, will join Cabinet as Minister for Regional Development, Territories and Local Government.

Mr Turnbull said he regretted that Mr Chester had lost his Cabinet position, putting the blame on “geography”.

He said Nationals leader Barnaby Joyce had wanted more Queenslanders in Cabinet due to the party’s strong representation in that state.

“Barnaby was keen to see that reflected in their representatives in the Cabinet,” he said.

Asked about Mr Chester’s demotion, Mr Turnbull noted Mr Joyce would “no doubt be able to answer this directly”.

In a statement on Tuesday, Mr Chester, a same-sex marriage supporter who backed Senator Bridget McKenzie for Nationals deputy, said he was “naturally disappointed” that Mr Joyce had “excluded” him from Cabinet.

Responding to the reshuffle, Opposition Leader Bill Shorten said it showed the Coalition had a “women problem”.

The other woman to be promoted was Western Australian MP Melissa Price, who becomes Assistant Minister for the Environment. Financial Services Minister Kelly O’Dwyer will add the Women portfolio to her responsibilities.

In another decision sure to draw the ire of the Labor, embattled Employment Minister Michaelia Cash has been promoted as head of the new Jobs and Innovation portfolio.

Senator Cash has been dogged by controversy in her portfolio after her office leaked information about the AFP raids on the AWU to the media, leading Labor to demand she was sacked.

Mr Turnbull said the day-to-day responsibilities for workplace relations would fall to the new Minister for Small and Family Business, Workplaces and Deregulation minister Craig Laundy.

Arthur Sinodinos also asked to be left out of the new Cabinet as he fights cancer, the Prime Minister said.

Mr Turnbull defended Mr Littleproud’s elevation from the backbench to Cabinet, saying the Queenslander “had 20 years’ experience in agribusiness”.

Mr Joyce, who cancelled a press conference earlier on Tuesday, takes the Infrastructure and Transport role from Mr Chester.

Mr Porter, a former Western Australian treasurer and attorney-general, has enjoyed a rapid rise through the ranks, serving as Social Services Minister since 2015, after he was elected to Federal Parliament in 2013.

But the Attorney-General’s power has been diminished with the creation of the super-portfolio Home Affairs, which will fall to Immigration Minister Peter Dutton.

Mr Porter will replaced as Social Services Minister by Dan Tehan, who has been elevated to Cabinet.

Alan Tudge, who oversaw the ‘Robodebt’ controversy while Human Services Minister, will move to Citizenship and Multicultural Affairs.