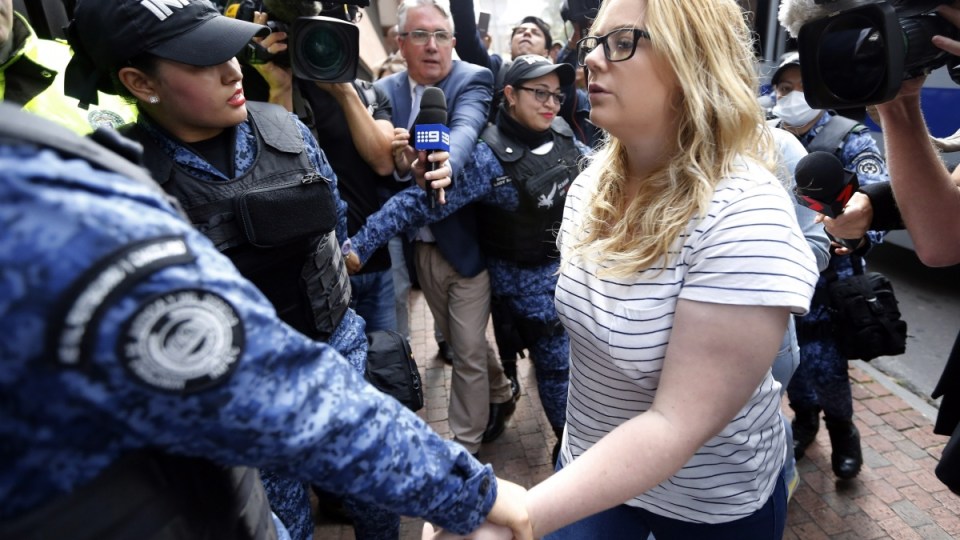 Cassandra Sainsbury was sentenced in November o six years jail, but could be out earlier. Photo: AAP

The old ‘ball and chain’ saying has taken on a whole new meaning for jailed drug mule Cassie Sainsbury who plans to say ‘I do’ to fiancé Scott Broadbridge behind the bars of El Buen Pastor Prison.

The couple’s celebrity agent Max Markson has told The Advertiser the couple has been granted permission to hold a wedding ceremony at the Colombian prison in the middle of next year.

“It’s going to be a special event and will attract attention across the country…that’s great exposure,” Mr Markson told the newspaper.

Mr Markson described a “lavish” and traditional ceremony at the notorious Bogota-based prison.

He told The Advertiser he was not in a position to disclose any details about the wedding, but said the couple would celebrate with family, wardens and Ms Sainsbury’s inmate friends.

However, the 22-year-old South Australian could be released in as little as six months after the judge accepted her plea deal.

The judge described Ms Sainsbury as a “victim” and a “small fish”, who was coerced into smuggling drugs by a large criminal syndicate.

Ms Sainsbury initially faced 30 years in jail after she was intercepted by authorities and arrested at El Dorado International Airport in April, allegedly carrying 5.8 kilograms of cocaine hidden inside her suitcase.

The former gym owner, whose family claimed she was in Colombia on a working holiday, was preparing to board a flight to London on her way back to Australia when she was arrested.

Colombian police said the drugs were divided into 18 plastic bags and hidden inside boxes of headphones, which Ms Sainsbury claimed were bought as gifts for her bridal party guests.

Anti Narcotic Police Ports and Airports director Jorge Mendoza estimated the drugs were worth about US$1 million (A$1.3 million).

Ms Sainsbury has reportedly learned to speak Spanish in the Bogota prison and is teaching English to the prison guards.