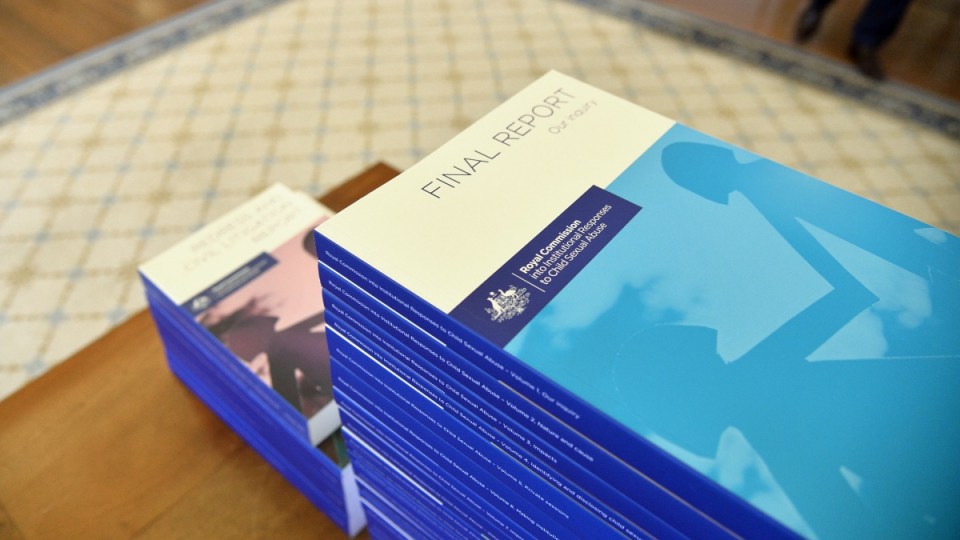 About 4000 institutions were reported to the commission, which heard testimony from more than 1200 witnesses. Photo: AAP

A national memorial for child sex abuse survivors and a national strategy to prevent future abuse, including appointing a federal minister for children’s issues, has been recommended by the child abuse royal commission.

In handing down its final 17-volume report on Friday, the $500 million, five-year Royal Commission into Institutional Responses to Child Sexual Abuse heard harrowing evidence from thousands of survivors in numerous church, sporting, government and community organisations.

As a result, more than 2500 people have already been referred to police.

“It’s been very tough, often harrowing work, but above all, I want to thank and honour the courage of the survivors and their families who’ve told, often for the first time, the dreadful stories of abuse that they received from people who actually owed them love and protection,” he said.

The final report, which details testimonies from more than 1200 witnesses over 444 days, says “there is no simple explanation for why child sexual abuse has occurred in a multitude of institutions”.

“However, we have identified a number of ways in which institutions may, inadvertently or otherwise, enable or create opportunities for abuse.”

This includes creating a ministerial portfolio with responsibility for children’s policy issues, and establishing a National Framework for Child Safety to provide a response to the implementation of the Child Safe Standards.

It wants the federal government to oversee the development and implementation of a national strategy to prevent child sexual abuse.

Federal and state government have been asked to respond to the commission’s 189 recommendations within six months.

“Australian society must never go back to a state of denial about the nature, cause and impact of child sexual abuse in institutional contexts.”

It has also recommended the royal commission website and reports from their work be archived within 12 months, so that the stories are not forgotten.

The royal commission, announced by then prime minister Julia Gillard in 2012, held its first public hearing in September 2013.

The commission says tens of thousands of children were allegedly abused in more than 4000 institutions, but the true number would never be known.

It was contacted by more than 15,000 survivors or their relatives with many thanking the royal commission for finally allowing their stories to be heard.

The commission has recommended that these stories and victims should not be forgotten.

“Memorials honour those who have suffered and provide opportunities to remember the past and think about the future. They provide a specific place for families and wider society to reflect on the trauma of survivors and mourn the victims lost.”

It has also recommended that institutions that have honours or dedications to known abusers remove them, and governments should strip them of any honours.

Ms Gillard has described as historic the handing down of the final report.

“On this historic day, my personal thanks go to the royal commissioners and all who supported their work. Our nation is indebted to you and to the survivors who fought so hard for justice and a safer future for our children,” she tweeted.

Meanwhile, the Catholic Archbishop of Sydney has assured child abuse survivors the church has begun working toward meeting the recommendations made in the final report.

Archbishop Anthony Fisher has promised the report would not “sit on a shelf”.

“I will study the findings and recommendations carefully, and then provide a detailed response as we discern, with the rest of the community, the best way forward,” he said in a statement on Friday.

‘No simple explanation’: Abuse royal commission hands down its findings and recommendations