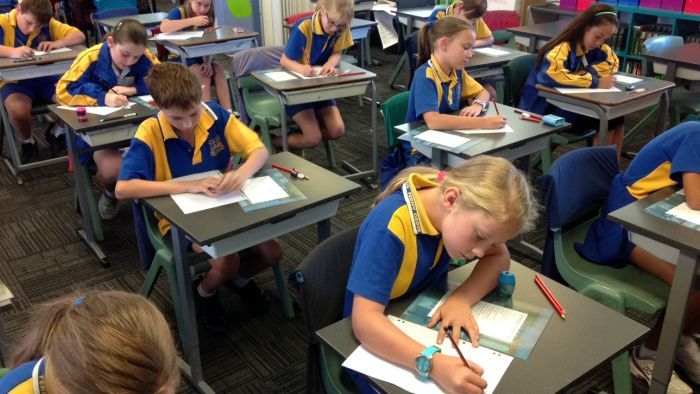 Results for writing dropped 2.04 per cent since 2011 when the test format changed.

Literacy and numeracy standards among Australia’s secondary students have either flatlined or gone backwards in the past 10 years, in what the federal education minister says is an alarm bell for teachers and governments.

Preliminary National Assessment Program Literacy and Numeracy results released in August showed small gains across the board in reading and numeracy since 2008, but results for writing had dropped 2.04 per cent since 2011 when the test format changed.

There was some improvement at primary school levels, but stagnation among secondary school students.

Writing scores have declined on average and reading gains have flatlined among high school students.

The results show girls outdoing boys in numeracy, and indigenous students, and marked differences between boys’ and girls’ literacy results, with girls outperforming boys by a sizeable margin.

Nationally 93.8 per cent of girls are achieving at national minimum standards in reading, compared with 89.6 per cent of boys.

Minister for Education Simon Birmingham acknowledged the results showed a lack of the consistency that should be expected, and “should serve as a warning to educators and policy makers”.

“The writing results are really a worry and I’ll be talking to state and territory ministers about how we can turn that around,” Senator  Birmingham told the ABC.

“We know how vital literacy skills are to setting students up for life beyond school, so the decline in writing scores and the flatlining of reading results should act as a wake-up call that some changes are required.

“The results overall are not what you would expect for a system which is seeing record and growing sums of funding invested into it,” Senator Birmingham said.

The National Assessment Program Civics and Citizenship, a student survey alongside the test which tests students’ knowledge of government and public life showed worrying results.

It showed two out of every three Year 10 students do not know the basics of how government works, which was the worst result since national testing began.

“These results are woeful and should be of serious concern,” Senator Birmingham said.

The Australian Curriculum, Assessment and Reporting Authority’s chief executive Robert Randall said in a statement: “The highest levels of trust in civic institutions at both year levels were reported for the police and law courts, while the lowest percentages of trust were found for social media.”