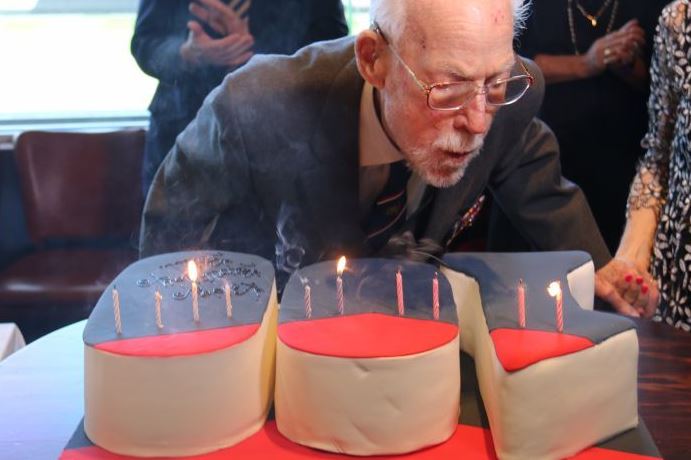 Centenarian and POW advocate Bill Rudd survived war, capture, being torpedoed, brutal imprisonment and an escape over the Alps. ABC

World War II veteran Bill Rudd OAM has spent decades uncovering and recording the accounts of former Australian prisoners of war for a simple reason — to set the record straight.

Mr Rudd, who celebrated his 100th birthday on Saturday, has spent the past 25 years as a self-declared “amateur historian” and in recent years recorded the accounts of POWs on his website AnzacPOW.com.

Mr Rudd admitted his generation did not like to talk about their time in World War II, keeping tales of tragedy and hardship away from even their closest friends and family.

“Nobody likes to live in shithouse memories,” he explained. “I put the war behind me. I’ve always looked to the future.”

But Mr Rudd was compelled to act after discovering war widows were struggling to get a $10,000 pension they were entitled to if their husband had been sent to a concentration camp.

“In several cases their application was knocked back because they couldn’t prove it,” Mr Rudd said.

“A lot of POWs got a raw deal from the government. The government, for example, never recognised the 29 Australian POWs that had been sent to German concentration camps. And they wouldn’t release the information.

“I made that into a bit of a campaign.”

Mr Rudd worked as an engineer in the Australian infantry.

In June, 1942, during the first Battle of Alamein, he was clearing mines late into the night to allow the advancement of allied troops and tanks.

But his squad was unaware the British relief had been attacked by Axis forces.

“When the tanks came to relieve us they all had iron crosses on them instead of British insignia,” he said.

“We were just rounded up like a herd of sheep and taken by train to various prison camps.”

He was being transported on the Italian cargo ship Nino Bixio when it was torpedoed by a British submarine, killing more than 180 Anzac troops.

Mr Rudd eventually ended up in the infamous Camp 57 in Northern Italy.

“None of us wanted to work for the enemy but we had to,” he explained.

A year later, Mr Rudd’s “golden moment” arrived after Italy signed an armistice with the Allies. He was told British troops would soon take control of the camp, but Mr Rudd knew better.

He trekked over the Swiss Alps, using his limited Italian language skills to trade cigarettes for boiled potatoes, eventually making it to neutral Switzerland.

“I had my liberty wrenched from me. I wrenched it back,” he said.

It was in Switzerland he met his wife Caty. They had four children and were married for 69 years.

Well-wishers at Mr Rudd’s 100th birthday celebrations thanked a man who, through diligence and dedication, uncovered stories that would have otherwise been lost.

This included Katrina Kittel, who discovered a lot more about father Colin Booth’s time in an Italian prison camp through Mr Rudd’s work.

“Many of the POW did not say a lot to their families,” Ms Kittel said.

“One thing that a veteran told me … is there’s a hierarchy of POWs.

“POWs with the Japanese, we acknowledge they came back as skeletons. POWs of the Germans suffered a lot. POWs of the Italians, people think they couldn’t have suffered.

Despite his age, Mr Rudd said he still felt a duty to keep working and set the record straight.

“I’m still obligated to do that when the official statistics are wrong,” he said.

And how does he summarise his 100 years?