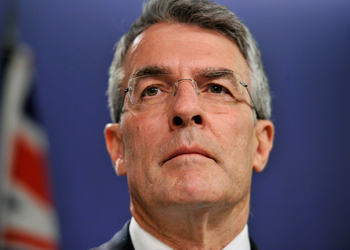 Mark Dreyfus says he is "very much hoping" Josh Frydenberg demonstrates he is not a dual citizen. Photo: AAP

Federal Labor appears to be divided over whether to pursue cabinet minister Josh Frydenberg, whose mother survived the Holocaust, over his eligibility to sit in Parliament.

The Energy Minister has flatly denied suggestions he may be a Hungarian dual citizen and said the assertion was inhumane and irrational.

But some in the opposition insist Mr Frydenberg is one of a number of government MPs who must “demonstrate” they are not dual citizens.

“It’s not for me to say, because I’m deeply sympathetic to Josh’s circumstances, that the constitution shouldn’t apply to him,” shadow attorney-general Mark Dreyfus said on Insiders.

Mr Frydenberg’s mother Erica Strausz was born in Hungary and escaped the Holocaust to Australia, arriving stateless as a child via a refugee camp in 1950.

“I’m very much hoping that he can demonstrate, by just giving some of the material facts, or releasing the legal advice, that he’s got nothing to be concerned about.

“But at the moment, his disclosure statement says nothing.

“It says that his mother, who escaped the Holocaust, was born in 1943 in Hungary and that’s all it says, it says that he’s got legal advice but he doesn’t say what it says.”

Mr Frydenberg resisted Mr Dreyfus’ demand for more information and said he complied with the declarations of interests.

“The reality is a number of Labor members have either rung me or said publicly that they feel that Mark Dreyfus’ approach has been pure political tactics and they’ve asked him to desist,” he said.

“He should look himself in the mirror and ask him whether he thinks he was doing the right thing.”

“I have sought and received Hungarian legal advice from Hungarian citizenship law experts.

“I have sought and received Polish legal advice from Hungarian citizenship law experts.

“I have sought and received Australian legal advice.”

Not ‘formal position’ to pursue Frydenberg

Opposition frontbencher Mark Butler, meanwhile, said it was not the party’s “formal position” to pursue Mr Frydenberg on the issue.

“Labor proposed a non-partisan list of MPs to be referred to the High Court for consideration of their eligibility based on citizenship and Josh Frydenberg was not on that list,” he said.

“The formal position is reflected in the motion we presented to the Parliament earlier this week, that is what we think should go before the High Court.

“It was drafted by the Labor Party, including Mark Dreyfus and the crossbench MPs, all five of them, and it did not include Josh Frydenberg.”

Last week, Labor frontbencher Ed Husic indicated he was uncomfortable with his party’s line of questioning.

“If we get to the point where we’re pursuing people who were stateless and escaping one of the most horrific episodes in human history, well, I’ll be interested in seeing how far we pursue that.”